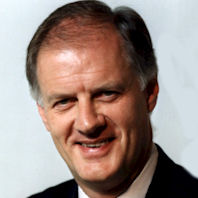 John Amatt has led expeditions to remote regions of Norway, Peru, Nepal, China and Greenland. He has explored areas of the Arctic, with many first ascents to unexplored peaks. He understands tough times and the value of encouraging people to push beyond their self-imposed limitations! As a leader of an Everest team Amatt and his team faced four tragic deaths in two unpredictable accidents before putting six climbers on top of the world. He has learned the danger of falling into the trap of complacency and the importance of questioning the status quo when seeking new ways of success in a rapidly changing world.

Amatt was a leader of the 1st Canadian mountaineering expedition to Western China, which made an ascent of 24,757 ft. Mount Muztagata – the highest peak in the world to have been ascended and descended entirely on skis. He also fulfilled a lifelong dream by organizing and taking part in Canada’s first successful expedition to reach the top of the world – the 29,028 ft. summit of Mount Everest, the world’s tallest mountain.

An educator by training, John Amatt has delivered more than 1,800 keynote presentations and seminars to total audiences of over 1,000,000 people in 44 countries around the world. John Amatt’s mission is to encourage people to be more personally accountable for their own actions, and to embrace effective teamwork by valuing the contribution of others.

In his book, Straight to the Top and Beyond, John Amatt uses the metaphor of adventure to develop a nine-step approach for scaling the heights in today’s unpredictable and rapidly-changing global business environments.

No Mountain Too High
In his new keynote, John uses his amazing storytelling ability and the power of metaphor to address the following themes:

Straight to the Top and Beyond
Change is inevitable … and increasing! Rapid and radical change is the primary challenge facing corporations and professionals today. We cannot stop this change, nor can we ignore it. But we can increase our ability to adapt, to manage change effectively, and to benefit from the numerous opportunities that change creates. In these rapidly -changing times, the metaphor of adventure is the perfect vehicle for articulating the strategy that will help us address this challenge. By definition, adventure involves dealing with the uncertain, the unpredictable and the unknown, just as change involves moving towards a future in which there are no guarantees. To succeed in the uncertain world of the 21st century, we must learn to embrace change, and to become visionary and adventurous in dealing with the economic, social, and political environments in which we must all operate.

The key to future successes will be to develop the “Adventure Attitude”™ philosophy – a pro-active approach based upon the following acronym:

Straight to the Top and Beyond will motivate your staff to embrace new opportunities in a changing world, to open up their minds to new realities, and to develop the “Adventure Attitude”™ strategies that will be the key to success in the future.

Climbing Your Own Everest: What it Takes to Get to the Top
John Amatt’s most popular presentation, the highly innovative and inspirational ‘Climbing Your Own Everest’ explores the metaphor of striving to reach the top of the world. Illustrated by magnificent color photography from his successful expedition which climbed Everest, and supplemented by music, sound effects, and taped radio conversations, this presentation investigates the qualities we must all bring to bear in climbing to the top in the difficult and unpredictable economic environments of the 1990’s.
Concepts explored include: 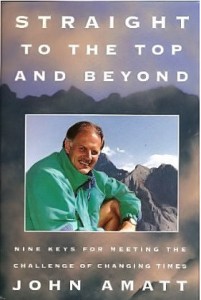 “Adventure isn’t hanging on a rope on the side of a mountain. Adventure is an ATTITUDE that we must apply to the day-to-day obstacles of life – facing new challenges, seizing new opportunities, testing our resources against the unknown and, in the process, discovering our own unique potential.”

John Amatt is Founder & President of One Step Beyond WorldWide, an innovative educational and motivational company, whose mission is to encourage people to push beyond their self-imposed limitations, to be more personally accountable for the results of their own actions, and to embrace effective teamwork by valuing the contribution of others. In this capacity, he has delivered more than 1,800 presentations and seminars in 44 countries and has been called “The World’s Best Adventure Speaker”.

A native of Great Britain, for the past 30 years he has been a resident of the Canadian Rocky Mountains and is the Founder of the Banff Mountain Film Festival, widely recognized as the world’s premiere showcase of adventure documentary films.

John is renowned in the international mountaineering community for making the first ever climb of Europe’s highest and steepest mountain face – the 5000 foot “Vertical Mile” Troll Wall in Norway. He was leader of an early climbing expedition to Western China, which used camels to approach a 25,000-foot mountain before skiing to the summit, this being perhaps the highest peak in the world to have been ascended and descended entirely on skis. And more recently, he was the principal organizer and a leader of Canada’s first successful expedition to reach the top of the world – the 29,035 foot summit of Mount Everest – a climb that was televised live throughout Canada and on ABC Nightline in the United States.

John’s adventures are related in his autobiography, Straight to the Top and Beyond, in which he uses the metaphor of his own adventures to develop a nine-step approach for scaling the heights in today’s unpredictable global business environments.