One of North America’s most in-demand presenters, Dr. Janet Lapp is a specialist in areas of fast personal and cultural change. Well known to audiences around the world for her challenging, in-your-face ideas and her endless humor, energy and ability to connect with audiences, Dr. Lapp’s presentations outline bold, innovative strategies and practical guidelines for excelling in rapidly changing, intensely competitive times. A former University Professor, researcher, Clinical Psychologist, and Registered Nurse, she changes mindsets, and prepares people for the future in a positive and productive way.

Dr. Janet Lapp is a licensed clinical psychologist, internationally known speaker, author, and creator/host of the award-winning CBS series Keep Well. As editor of the FastChange Letter and author of three best-selling books: Dancing with Tigers, Plant your Feet Firmly in Mid-Air, and Positive Spin™ Janet Lapp has received critical acclaim for her forward-looking ideas.

Janet Lapp translates her clinical and academic knowledge into down-to-earth, humorous but powerful messages that heal, inspire and encourage. Dr. Lapp believes it’s never too late, nothing is impossible and there are no excuses.

Plant Your Feet Firmly in Mid-Air: Thrive During Fast Change
Whether sales, customer experience or leadership …. Discover opportunities in rapid change. See the positives. Keep morale high. Develop team accountability. Leadership demands the ability to think and lead others in new ways. This inspirational business program is a wake-up call to the future–knowing up-to-date trends impacting your world, you’ll be able to think and lead others in new ways. “The worst thing you can do is to sit back and do nothing, with the excuse that you were not told. The most important activity during fast change is to move forward. Don’t wait! The window of opportunity closes quickly.”

Leading at the Edge of Change
This high-energy program will show you how to take smart risks and push you to the edge of what’s possible. Hear how companies have broken the mold and pushed the edges in leadership and innovation. The ideas in this program will directly impact your success. Take risks, go higher, move through fear and press on. If you are not a the best you could be, why not? Follow three simple steps to getting on top. Push yourself into new areas. Keep raising the bar, and don’t rest on the winner’s pedestal. “Fly through life at the edge; the middle is crowded and gray. Whether you are leading a company or a team, or building and expanding your own business, success today means thinking and leading others in new and unexplored ways.” 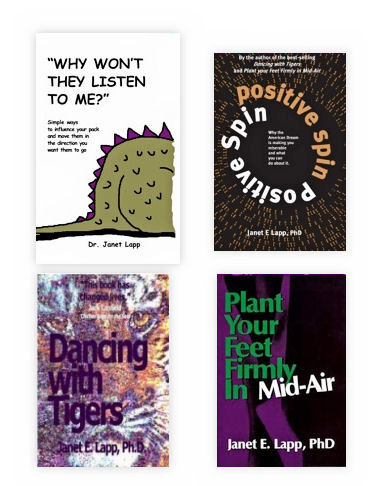 “Change is either a force to be feared or an opportunity to be seized; the choice is ours.”
Janet Lapp

Dr. Janet Lapp is a business motivational speaker who changes mindsets, and prepares people for the future in a positive and productive way. A former University professor, researcher, clinician, and registered nurse, she was born and raised in Canada, and her PhD with Honours is from McGill University in Montreal. A licensed clinical psychologist and author of five books, she has been admitted into the CPAE Speakers Hall of Fame … the ‘Oscar’ of Professional Speaking, and one year was rated by Toastmasters as one of the top three speakers worldwide.

Dr. Lapp translates clinical and academic knowledge into down-to-earth, humorous and powerful messages that inspire and encourage others to adopt the mindset to change and adapt to whatever forces and challenges there are in their specific arenas. For over 25 years, from Russia to Argentina to Hong Kong, she has presented professionally in English, French or Spanish to over 1,500 government agencies and Fortune 100 clients.

She is the creator and host of the CBS-series ‘Keep Well’, has been nominated for local Emmy Awards, and has appeared regularly on INN, ABC, CNN, and NBC affiliates. She is author of five books: Dancing with Tigers, Plant your Feet Firmly in Mid-Air (a change management book used by both Ritz-Carlton and IBM sales for their change efforts), Positive Spin, Why Won’t They Listen to Me? (leadership), and Lead at the Edge of Change (adapting to fast change).

A former air race pilot and current flight instructor, Janet has flown her airplane throughout South America and Africa, and with the Flying Doctors of Mercy (Ligainternational.org), created a Home Care program and developed Mexico’s ‘Mujeres Sanas, Mujeres Familias’ program for women.