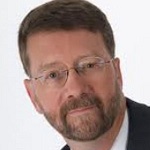 B. Joseph Pine II is an internationally acclaimed author, speaker, and management advisor to Fortune 500 companies and entrepreneurial start-ups alike. With his partner Jim Gilmore, he is co-founder of Strategic Horizons LLP, a thinking studio dedicated to helping businesses conceive and design new ways of adding value to their economic offerings. While with IBM, Pine held a number of technical and managerial positions; one of his many assignments was key to the effective launch of the Application System/400 computer system, for which he managed a team that brought customers and business partners directly into the development process of the system. Because of this innovative activity, customer needs were met more exactly and quality was significantly enhanced – factors that contributed greatly to IBM’s Rochester, Minnesota facility, winning the Malcolm Baldrige National Quality Award in 1990.

Authenticity in Business
Pulled directly from Pine &amp; Gilmore’s latest book Authenticity: What Consumers Really Want, Pine illustrates that in a world of paid-for experiences, consumers increasingly question what is real and what is not. As a result, Authenticity is quickly becoming the new consumer sensibility – and key business imperative – determining what offerings consumers buy and who they buy those offerings from.

Welcome to the Experience Economy
A look at the competitive landscape through a new lens – going beyond goods and services to stage truly memorable experiences. An overview of the principles and frameworks needed to stage compelling experiences, with relevant, up-to-date exemplars that illuminate the ideas. Based on the book, The Experience Economy: Work Is Theatre & Every Business a Stage.

The Experience IS the Marketing
An unblushing look at the failure of traditional marketing and what will replace it. Pine & Gilmore share real-world examples, unveil their insightful Location Hierarchy Model, and make the case for the emergence of a new executive – the Chief Xperience Officer (CXO). Based on the new Pine & Gilmore e-Doc “The Experience Is the Marketing.”

Work Is Theatre
A new model for staging business performance using the principles of theatre to fundamentally change how – and why – work is performed in the Experience Economy. Particularly valuable for molding company culture and attitudes in the workplace.

Going Beyond the Experience
Once an emerging phenomenon, the Experience Economy is now fully here – with increased competitive intensity and even some commoditization amongst experience stagers. The next step? Using customized experiences to guide individual change via transformations.

Understanding Customer Sacrifice
Understanding the gap between what customers settle for and what they want exactly. A model for rethinking the traditional metric of customer satisfaction and discovering hidden opportunities for innovation and differentiation. An expanded discussion based on the article first appearing in Context Magazine entitled “Customer Satisfaction is No Longer Enough.”

Mass Customization
The most innovative companies are rapidly embracing a new paradigm of management – Mass customization – that allows them the freedom to create greater individuality in their offerings at desirable prices. Based on Joe Pine’s pioneering book, Mass Customization: The New Frontier in Business Competition.

The Four Faces of Mass Customization
A unique perspective on understanding where, how, and for whom to customize. Four distinct approaches to mass customizing only where it counts. Based on the Harvard Business Review article of the same name.

Cultivating Learning Relationships
Using the knowledge gained from customer interactions to customize offerings and create true customer loyalty. Based on the Harvard Business Review article entitled “Do You Want To Keep Your Customers Forever?” 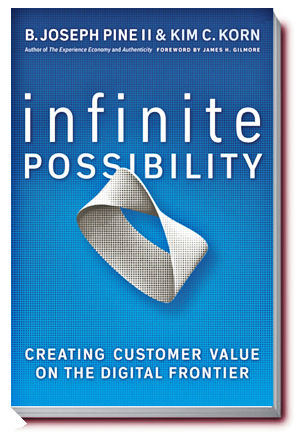 Once upon a time in a career far, far away, Joe Pine worked for IBM in the frozen tundra of Rochester, Minnesota. For the launch of the AS/400 computer system he created a group that brought customers and business partners into the actual development process. Because of this innovative activity, customer needs were met more exactly and quality was significantly enhanced – factors that contributed greatly to IBM winning the Malcolm Baldrige National Quality Award in 1990.

One of the lessons that Joe learned during this time was that every one of these customers was unique. After moving into strategic planning, this insight led him to read Stan Davis‟ seminal book Future Perfect. When Joe read the chapter on mass customizing, he had an epiphany – he says “The skies opened up and the angels sang!” – that led to placing the idea of efficiently serving customers uniquely into the vision and strategy of IBM Rochester. It also led to IBM sending him to MIT‟s Sloan School of Management to gain his Master‟s of Science degree in the Management of Technology. He focused his thesis on the paradigm shift (yes, that‟s the clichéd term he used) from Mass Production to Mass Customization, and determined to turn it into a book after graduation. (It was when MIT insisted on using his full name on the front page of the thesis that Joe started to think, “Hmmm, B. Joseph Pine II sounds pretty cool. . . .”. If you don‟t already know what the “B.” stands for, don‟t even bother trying to worm it out of him.) Fortunately, Joe was able to find an organization within IBM that helped him do that, the IBM Advanced Business Institute in Palisades, New York. His manager, Al Barnes, gave him time to devote to the book while he also learned to teach business concepts to the IBM clients who flowed through the ABI. So in late 1992, Mass Customization: The New Frontier in Business Competition was published by Harvard Business School Press. (His thesis advisor, economist Michael Piore, submitted the document for the Brooks Prize Competition for Thesis Excellence in the hope that it would help Joe get a book contract; instead, the judging was delayed by over a year, by which time the book contract helped Joe co-win the Competition!)

About six months after publication Joe received a letter in the mail from some guy named Jim Gilmore with CSC Cleveland Consulting Associates, who said his reaction on discovering the book was “Oh shoot – someone else has already written it!” He included a tape of his own talk on the subject of Mass Customization highlighting “Aaron the shoeshine man.” Joe and Jim found out they were going to be in Chicago at the same time, and so met and immediately struck up a friendship. This led to CSC becoming Joe‟s biggest client when he left IBM in mid-1993 to strike out on his own.

Their collaboration resulted in, first, some great work guiding CSC clients; second, a Harvard Business Review article, Joe‟s third, on “The Four Faces of Mass Customization”; and third, discovering and delineating the emerging Experience Economy. (Joe can still remember the genesis of the latter: an executive education session back at the ABI where, in response to a question, he uttered the phrase “Mass customizing a service automatically turns it into an experience!” In that instant a new-to-the-world idea was born.)

More important than any one idea, however, was the creation in January 1996 of a different kind of firm, Strategic Horizons LLP, a thinking studio dedicated to helping businesses conceive and design new ways of adding value to their economic offerings. Pine & Gilmore‟s raison d‟etre is to discover what is going on in the business world, make sense of it, and then develop frameworks so that companies can respond intelligently to the fundamental changes happening in the competitive environment. (A fourth result of their collaboration: punny custom Christmas cards that they love doing every year for friends and clients.) Simply put, Joe specializes in helping people see the world of business differently. He did that first by promulgating the concept of Mass Customization in his first book, which detailed how organizations didn‟t have to provide the same thing to everybody, but could give individual customers exactly what they want, at a price they‟re willing to pay. (Joe said at the time that his mission in life was to make the phrase “individual customers” be seen for the redundancy it was.) The Financial Times chose the book as one of the seven best business books of 1993, and in 1995 it won the Shingo Prize for Excellence in Manufacturing and Research. He and Jim followed this up by editing a collection of Harvard Business Review articles entitled Markets of One: Creating Customer-Unique Value through Mass Customization, published (naturally) by HBSP in 2000.

Joe did it again with The Experience Economy: Work Is Theatre & Every Business a Stage, co- authored with Jim and published by HBSP in 1999 (nine months after another HBR article, “Welcome to the Experience Economy”, primed the pump for the concept in the marketplace of ideas). Published in twelve languages and named among the top five business books of 1999 on Amazon.co.uk, The Experience Economy was chosen one of the 100 best business books of all time by 800ceoread in 2009. It shows how businesses should embrace theatre as an operating model to stage unique experiences. Tom Peters called it “a brilliant, absolutely original book” while a piece in MIT‟s Sloan Management Review said “The Experience Economy will force managers to change their most basic, cherished assumptions about innovation and strategy”. But Joe‟s all-time favorite comment was when The Industry Standard began its review with the statement, “This book scared the hell out of me.”

More recently, Joe is once again helping people see the world of business differently as he and his partner Jim discovered that in the Experience Economy, people increasingly question what is real and what is not. And more and more, they want the real from the genuine, not the fake from the phony. Authenticity, therefore, is becoming the new consumer sensibility – the primary buying criterion by which people choose what to buy, and who to buy from. This resulted in their most recent path-breaking book, Authenticity: What Consumers Really Want, published by (the slightly renamed) Harvard Business Press in the fall of 2007. This book, chosen one of the top ten business books of the year by Amazon.com and featured in a cover story in TIME Magazine on “10 Ideas that are changing the world”, provides a way of thinking about authenticity in business plus a set of tools and techniques for rendering authenticity in any company.

Joe likes to say that he didn‟t invent the Experience Economy or any of the other concepts with which he is credited. Rather, he discovered them. Such discoveries do not happen by accident, however. They result from voluminous reading, wide-ranging real-world experiences, a talent for pattern recognition, and the ability to conceptualize what he, and of course Jim, see into meaningful models for action. (Indeed, someone once commented that they should‟ve named the company “Frameworks „R‟ Us”!) Most evenings you‟ll find him pursuing the first step – reading one of four daily newspapers, 40+ periodicals to which he subscribes, or scores of books he gets through every year.

When he‟s not writing, that is. Joe describes that as his first (vocational) love, taking fingers to keyboard in order to vigorously wrestle with the ideas, first, and only then to describe them to others. He further sharpens these ideas and frameworks in the speeches, workshops, executive education, and ongoing consulting he performs with Fortune 500 and entrepreneurial start-ups alike. While a terrific stand-up speaker who knows both how to keep an audience entertained and how to impart actionable ideas and frameworks that listeners can use to change their companies, Joe loves nothing better than small, intimate gatherings where other people become full participants in coming to grips with the ideas, corralling the frameworks to their own use, and committing to a course of action that benefits their customers, and therefore their businesses.

That‟s why he loves teaching so much. Honing his skills at the IBM Advanced Business Institute, Joe has also taught at Penn State, Duke Corporate Education, the University of Minnesota, UCLA‟s Anderson Graduate School of Management, and the Harvard Design School.