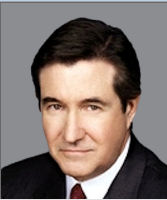 A broadcast legend and one of the world’s most respected journalists, Forrest Sawyer provides audiences with the vast media experience, creativity and integrity that put him in at the top of his game. With his real-time knowledge of world events, Sawyer puts his listeners behind-the-scenes of late-breaking headlines and issues of national, international and business concern. Is the new age of corporate-owned media influencing how the news is brought to you? And how will advances in technology shape the way in which you receive it?

Sawyer provides unparalleled insights into what’s on the horizon for the media, providing a snapshot of the media of the future based on what’s happening right now, and whether in the field or in anchoring positions at NBC, MSNBC, CBS and ABC News, Sawyer is never far from the front lines of what is affecting our world today. Erudite and easily able to shape discussions in a way that transcends a simple point-counterpoint, Sawyer is an experienced moderator who gets to the core of the issues in a way that allows for informed discussion and a new understanding of how today’s issues affect you and your world. Forrest Sawyer brings your issues to life and involves the audience in a lively and meaningful way.

Our Changing World
During this eye-opening presentation, Forrest Sawyer takes on the hottest issues of the day. He makes sense of the headlines and clarifies complicated events, while sharing the wisdom and perspective that only a media veteran of his quality could possess.

Forrest Sawyer As Moderator
One of the best moderators available today, Forrest Sawyer leads discussions with a perfect balance of information and tone, while deftly handling diverse panels of all types. More than just a facilitator, he partners with you to bring out the best in your panel and to clarify your issues.

Forrest Sawyer has had a diverse career, first as one of America’s most respected television journalists, and more recently as an entrepreneur in innovative health care.

Sawyer is today an advisor and board member of Edison Pharmaceuticals, the world leader in the study of mitochondrial disease. He is also a co-founder of Ampere Life Sciences, a newly launched company developing medical and functional foods targeting antioxidant deficiencies. In addition to unique research and development programs, both companies are building innovative communication platforms.

As a journalist, Sawyer has over 24 years of experience reporting from around the world. He is a veteran of ABC, CBS, and MSNBC. He has anchored the ABC magazine programs Day One and Turning Point, as well as World News Sunday and Good Morning America. For a decade Sawyer was the primary replacement anchor on ABC’s Nightline.

Sawyer is the founder of FreeFall Productions, an award-winning documentary production company. He has reported documentaries for ABC News, MSNBC, Frontline and the Discovery Networks. His work includes the acclaimed documentary Return to the Ia Drang, which for the first time brought United States veterans back to a critical Vietnam battlefield to meet their one-time enemies. And in Kosovo, Forrest documented from the battlefield the controversial deployment of Apache helicopters that resulted in the only American casualties of war.

Sawyer is a veteran war correspondent, having reported on every United States action over the past two decades. In 1990 and 1991, he spent eight months covering the Gulf War, scoring numerous exclusives from Baghdad to Saudi Arabia to Iran; including reports from inside Kuwait City before it was liberated by coalition forces.

His world travels include reports from the Oklahoma City terrorist attack, a report from inside KGB headquarters on the Lee Harvey Oswald Soviet intelligence file and the attempted coup of Manuel Noriega in Panama. Sawyer’s work has carried him throughout Asia, Africa, Latin America and the Middle East.

Over the course of two decades as a national journalist, Sawyer has reported extensively on the impact of human activity on the environment. His reports have included an examination of deforestation in the Amazon; water issues in the Everglades; a week-long Discovery Television series on increased tornado and storm activity and several reports on climate change.