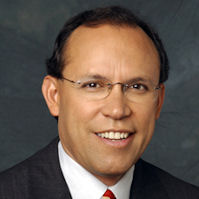 Manny Medrano is an expert in leadership, team building, workplace diversity, motivating individual performance and overcoming adversity. He is a nationally-recognized business and professional speaker who has addressed America’s top corporations, business entities, law firms and universities, as well as non-profit organizations and government agencies. An embodiment of the American success story, Manny’s personal journey has taken him from a gang-infested barrio to the pinnacle of journalism as an Emmy-award winning network correspondent.

Prior to becoming a broadcast journalist, Manny was a federal criminal prosecutor who never lost a jury trial. He braved death threats to successfully prosecute the drug cartel leaders that kidnapped, tortured and murdered DEA federal drug agent Enrique Camarena. Manny is the recipient of numerous awards and honors for his trial lawyer achievements.

He is a Harvard Law School graduate and trial attorney who has never lost a jury trial. Manny’s impressive legal background led him to roles as an Emmy award-winning reporter/anchor for KTLA News and KNBC News in Los Angeles, and to the prestigious ranks of the U.S. Supreme Court press corps as a Supreme Court/Legal Affairs correspondent for ABC News in Washington, D.C.

Having served in a variety of challenging leadership and management positions throughout his career, his life is an extraordinary success story marked by consistent excellence.

Conquering the Tough Times Ahead
Manny’s most personal keynote speech is a powerful presentation that resonates with audiences because it touches on the themes of personal obstacles and the irrepressible human spirit. Born into an impoverished immigrant household, Manny pulled himself out of a crime-ridden barrio to go on to graduate with honors from Harvard College and then Harvard Law School, culminating in two immensely successful careers. With humor and unflinching passion, Manny challenges listeners to conquer fear and self-doubt during these difficult and uncertain times. He inspires audience members to embark on their own journey of self-discovery and empowerment as a means to reach their personal and professional goals.

The Collapse of Traditional Journalism, and the Rise of New Social Media
America’s financial and auto industries are not the only ones in crisis. There is also massive upheaval taking place in journalism. Evening newscasts have been replaced by 24/7 internet journalism. Foreign bureaus are closing. Newspapers are shuttering operations as advertising revenue plummets. In this hard-hitting and sobering presentation, Manny examines the democratization of American journalism, where consumers are abandoning traditional mainstream media outlets in favor of bloggers and citizen journalists. But at what cost? The demise of traditional journalism has translated into more independent, but less aggressive newsgathering. With journalism at a dangerous tipping point, Manny discusses the future of news coverage and its impact on our society, and offers insights on how listeners can adapt to the dramatic changes occurring in the delivery of important news and information.

Trial by Sound Byte: Law in the New Millennium
An experienced, award-winning trial attorney and television broadcast journalist, Manny provides a behind-the-scenes look at current and headline-grabbing legal stories. From notorious cases involving celebrities, to high profile political cases, to the controversy over cameras in the courtroom, Manny cuts through the legal jargon and focuses on the people, players and issues behind the headlines.

The High Court: A Supreme Controversy
A former member of the prestigious U.S. Supreme Court press corps, Manny is the only member in its long history to actually try a case heard before the Court. He discusses its inner-workings, as well as landmark, controversial decisions of the highest court in the land. He offers unique insights into the political “chess game” unfolding daily as President Obama’s Supreme Court nominees are thrown into the public arena, and examines their potential legal and political impact on the high court and our society for decades to come.

Five Things I Wish I’d Learned at Harvard Law School
A must-hear presentation for attorneys, judges and even non-lawyers, Manny shares insights and lessons learned from almost 30 years in the trenches as an award-winning trial attorney and TV broadcast journalist. While torts, contracts and constitutional law were among the required courses at Harvard Law School, they could not prepare Manny for many of the tough issues he confronted in professional life. Just some of these issues include reacting when a contract was placed on his life, consoling families of murder victims, dealing with the media in high profile cases, learning how to business develop or “rainmake,” and connecting with jurors to accomplish a 60-0 win record. Manny discusses these and other poignant lessons learned in the practice of law and throughout his journalism career that he now applies to all facets of his personal and professional endeavors.

YOUR Keynote Speech Topic
Manny is a nationally-recognized business and professional speaker with almost 30 years of experience in captivating and motivating audiences. He is an expert at working with organizations to build unique, customized presentations that meet their individual needs. Please contact him to discuss the perfect presentation for your audience.