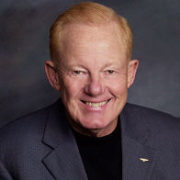 A testament to the strength of the human spirit, Charles Plumb endured the most extreme hardship and used the experience to transform his life in a profound way. In an emotional and inspiring presentation, Plumb tells the story of his survival as a prisoner of war in Vietnam for nearly six years—locked in solitary confinement and routinely tortured in an 8′ x 8′ dirt floor cell. Having overcome loneliness, fear, pain and depression, he puts audiences’ difficulties into perspective and inspires them to meet their own obstacles head-on, no matter how tough they appear. Plumb is a living testimony to how overcoming adversity can propel us beyond self-imposed limits, making us stronger and more confident. He motivates audiences to see the opportunities in the challenges they face and to tap into their inner strength to live life to the fullest.

Tough Choices in Challenging Times
Charlie Plumb’s presentation deals with challenges: his . . . and yours. In an upbeat, impactful way, Plumb draws upon his POW experience of nearly six years to demonstrate how to turn adversity into assets in a highly competitive marketplace: in business or in your personal life. Adept at tailoring his message to seamlessly fit your objectives, Plumb penetrates the hearts and minds of the audience and focuses on methods people can use to break free from their own prisons . . . prisons created by blaming others, fear of failure and self-pity. 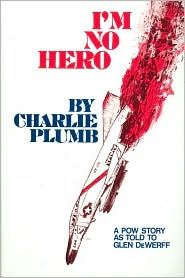 Captain Charlie Plumb has lived what he believes to be the American Dream. As a farm kid from Kansas, he fantasized about airplanes although he felt certain he would never have the opportunity to pilot one. It would be the United States Navy who afforded Plumb the opportunity to live out that dream.

After graduating from the Naval Academy, Plumb completed Navy Flight Training and reported to Miramar Naval Air Station in San Diego where he flew the first adversarial flights in the development of what would be called The Navy Fighter Weapons School, currently known as “TOP GUN”. The next year, Plumb’s squadron the Aardvarks launched on the Aircraft Carrier USS Kitty Hawk with Fighter Squadron

mission, just five days before the end of his tour, Plumb was shot down over Hanoi, taken prisoner, tortured, and spent the next 2,103 days as a Prisoner Of War.

Following his repatriation, Plumb continued his Navy flying career in Reserve Squadrons where he flew A-4 Sky Hawks, A-7 Corsairs and FA-18 Hornets. His last two commands as a Naval Reservist were the on the Aircraft Carrier Corral Sea, and at a Fighter Air Wing in California. He retired from the United States Navy after 28 years of service.

To this day, Captain Plumb continues to fly left-seat at every opportunity. He has personally owned 8 airplanes, the most treasured being a World War II PT-19 Open-Cockpit Antique. He currently owns a Rutan-designed experimental single-engine Long-Eze.﻿