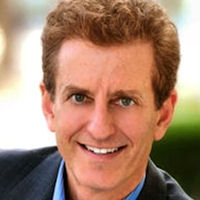 Acclaimed author, former White House economic policy director and economist Todd Buchholz connects the dots between local and global markets, the politics that define business environments, and the people who drive it all. He puts global politics and financial markets into perspective and offers a positive understanding of the challenges and opportunities facing today’s markets. Buchholz “lights up economics with a wickedly sparkling wit,” says the Associated Press.

The former White House senior economic advisor, Tiger hedge fund managing director and best-selling author has jousted with such personalities as James Carville and Ben Stein. His lively and informative speaking engagements have earned him a place in Successful Meetings Magazine’s “21 Top Speakers for the 21st Century, and his best-selling books on economics and financial markets have been widely translated and are taught in universities worldwide.

Buchholz entertains his audiences and shows them how to thrive in a challenging economy, while gearing up for future prosperity. A former senior economic advisor at the White House, Buchholz is author of several best-selling books, including New Ideas From Dead Economists, New Ideas From Dead CEOs as well as Bringing the Jobs Home, Market Shock, and From Here to Economy, and frequently writes for newspapers such as The New York Times and The Wall Street Journal.

Buchholz regularly appears as a commentator on NBC, CNBC, Fox News, and PBS. His books have been translated into over 15 languages, and are used in universities worldwide, including Harvard and Princeton. His most recent publication is RUSH: Why You Need And Love The Rat Race, which has ranked on the LA Times’ top 10 summer reading list for 2011 as well as the top 10 for Publisher’s Weekly.

Is the Economy Headed Higher — or Off a Cliff?
The go-go days of the 1990s turned into the go-backwards days of the 2000’s. What’s next? How will China’s erratic growth shake up business? Will commodity inflation unhinge the economy again? Can Fed chair Ben Bernanke keep the economy recovering? Will Congress try yet another “stimulus?” Todd Buchholz, who led the White House Energy Strategy, will help you figure out whether OPEC will tighten energy supplies again or whether a revolution in natural gas will reinvigorate U.S. factories. Learn how the “scissors economy” opens up new business and investment opportunities. Today might be the very best—or the very worst—time to finance a loan. By “connecting the dots” of the world economy, Todd Buchholz will help you develop a timely vision for the economy and the stock market.

How To Compete in A Global Economy
Never before have businesses felt such excruciating pressure to compete. While riding a roller coaster stock market, firms have struggled to raise prices, even when their costs go up. China poses a threat but also an opportunity for new sales. Loyal customers seem ready to jump to a competitor. How can your company or industry survive and thrive? What will Congress do to help or hurt your industry in the coming year? Keynote speaker and former Harvard scholar Todd Buchholz teaches how to anticipate the new trends that open up fresh opportunities for manufacturing, service and technology companies.

Washington, DC 2013 – What’s at Stake?
In this keynote speech, Former White House adviser Todd Buchholz takes you inside the hottest debates in Washington. Who’s pushing the buttons on economic policy and industry regulation? Can President Obama do anything to reshape the economic and business landscape while facing up to a GOP-controlled House? Can Ben Bernanke push forward with QE3? Will new environmental regulations invigorate or cripple the business climate? What’s at stake for the economy, the financial markets and geopolitics? Todd Buchholz will help you figure out whether the shenanigans in Washington make life easier or tougher for your company.

Rush: Why You Need and Love the Rat Race
Todd Buchholz, author of the classic New Ideas from Dead Economists and New Ideas from Dead CEOs, reveals why we need competition to keep us going and going strong. Weaving in everything from neuroeconomics to evolutionary biology to renaissance art to General Motors, Buchholz will convince you that the race to compete has not only made us taller and smarter, it’s what we love and need. In this provocative keynote presentation, Buchholz explains why laid-back firms get entangled in their own red tape and why contented CEOs end up driving their employees to bankruptcy court. While Buchholz argues that businesses need internal competition, he shows how to inspire creative competition, rather than a shark-infested culture. This is a cutting edge presentation that defies and shreds conventional wisdom.

New Ideas from Dead CEOs
Todd Buchholz brings to life history’s greatest CEOs—from Steve Jobs to Ray Kroc to Akio Morita, Estée Lauder to Tom Watson Sr.—and shows how their lives, leadership and lessons can inform and inspire us in today’s chaotic marketplace. How did Sam Walton help create the “scissors economy” and go from being the owner of a single dime store to the CEO of Wal-Mart? How did Estée Lauder, a working-class woman from Queens, convince the shoppers at Saks to buy her cosmetics? How did the San Francisco earthquake of 1906 eventually lead to A.P. Giannini’s success as America’s greatest banker? In this speech, Buchholz answers these questions and shows today’s business managers how to deploy their entrepreneurial secrets to benefit their companies in today’s hyper-competitive global economy. He uses his experience as a White House economist, Harvard scholar, and Wall Street professional to show investors what kinds of CEOs to invest with and what kinds of companies to steer away from. In addition, Todd lays out a forecast for the economy and the financial markets. Audiences come away from this keynote presentation with a fresh understanding of the competitive pressures we face today, and a road map to finding success.

China: The Threat and the Opportunity
Everyone knows China offers one billion potential customers. But China also provides one billion workers eager to compete with American workers. The Chinese Communist Party has shed its communist ideology, but it still struggles to keep its people under control. By showing audiences how to anticipate China’s next moves, this original keynote speech presentation by Todd Buchholz will help you take advantage of the incredible business opportunities ahead while avoiding the landmines.

The Hope and Danger Behind World Politics
Since September 11, 2001, the world has changed, looking even more dangerous than during the Cold War era when the Soviet Union aimed missiles at the U.S. In just a few weeks during the winter of 2011, the map of the Middle East turned upside down, reposing dictators and replacing them with…who knows? Todd Buchholz takes his audience on a world tour to gauge the “hot spots” that threaten us. At the same time, though, we must appreciate the successes: the countries that have turned from dictatorships to democracies; the economies that have dumped communism for capitalism. Recently, The New York Times editorial page called on Buchholz to make sense of the terrorism threat. As a former “point man” for the White House during the Gulf War, Todd Buchholz shows his audience how to handle the risks while keeping hope alive in this expansive keynote speech presentation. 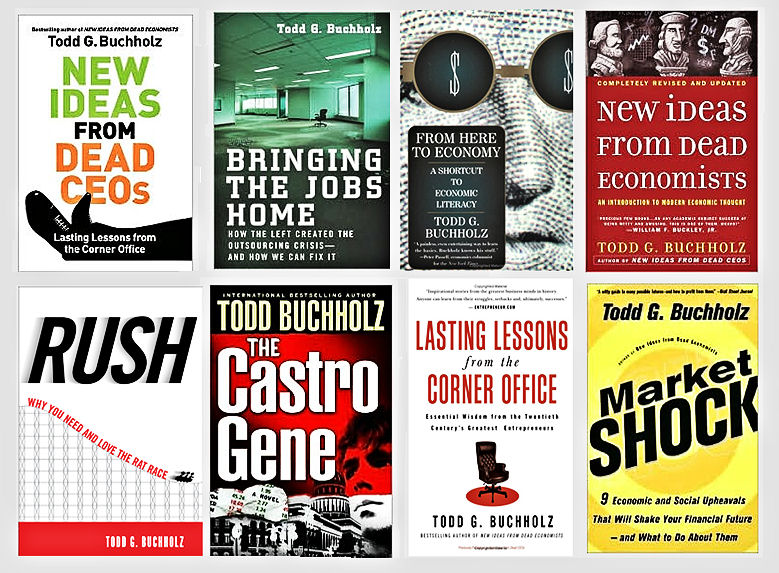 A former director of economic policy at the White House, a managing director of the $15 billion Tiger hedge fund, and an award-winning economics teacher at Harvard, Buchholz targets his entertaining remarks to the cutting edge of economics, finance, and business strategy. He has advised President Bush, and is a frequent commentator on ABC News, PBS, and CBS, and recently hosted his own special on CNBC. Buchholz has debated such luminaries as Lester Thurow and Nobel Laureate Joseph Stiglitz. He is Co-Founder and Managing Director of Two Oceans Management, LLC and was a fellow at Cambridge University in 2009.

He has authored numerous books that have been translated into a dozen languages and are used in universities worldwide, the likes of which include Harvard, Duke and Princeton. Market Shock: 9 Economic and Social Upheavals that Will Shake Our Financial Future, was released to rave reviews and dubbed “outstanding” by the Wall Street Journal. Buchholz is also author of the best-selling New Ideas from Dead Economists, New Ideas from Dead CEOs, From Here to Economy, and Lasting Lessons from the Corner Office, which were lavishly praised by The New York Times and Financial Times. His newest book Rush: Why You Need and Love the Rat Race has been named by Publishers Weekly as a “top ten” book for 2011.

Buchholz is a contributing editor at Worth magazine, where he writes the “Global Markets” column, and he has penned articles for the New York Times, Wall Street Journal, Forbes, and Reader’s Digest. He delivered a lecture at the White House entitled “Clarity, Honesty and Modesty in Economics,” and has been a keynote speaker before such groups as Microsoft, IBM, Goldman Sachs and the US Chamber of Commerce.

Before joining Tiger in 1996, Buchholz was President of the G7 Group, Inc., an international consulting firm, whose clientele included many of the top securities firms, investment banks and money managers in New York, London, and Tokyo. From 1989 to 1992 he served at the White House as a Director for Economic Policy. Buchholz won the Allyn Young Teaching Prize at Harvard and holds advanced degrees in economics and law from Cambridge and Harvard. He also holds several engineering and design patents and is a co-producer of the Broadway smash “Jersey Boys”.