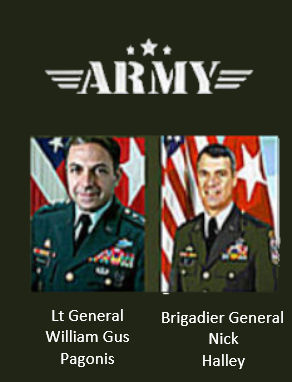 Lt. General William Gus Pagonis was the director of Logistics during the Gulf War and is widely recognized for his logistical achievements during Desert Storm, winning high praise from Gen Norman Schwarzkopf. BRIGADIER GENERAL NICK HALLEY has commanded soldiers in combat in Viet Nam, Grenada and Desert Storm. An Army Paratrooper, Army Ranger and Special Ops (Anti-Terrorism) Veteran , he has been awarded many decorations including two Silver Stars for bravery in combat actions and 2 Purple Hearts for wounds in combat operations.

LEADERSHIP UNDER FIRE
Our leaders are currently operating in a very “hostile” leadership environment. To help leaders become effective immediately, The Generals will discuss the best leadership lessons learned in the military, multiple combat commands and several years at the Vice President/General Manager level in major firms to include Motorola and Sears. The major leadership lessons are illustrated with very interesting and entertaining military and corporate “War Stories”. This talk will make you laugh, feel sad, become elated, feel proud, feel good, and learn many new things about leadership from proven leaders in both the military and corporate worlds. This talk inspires leaders to “Take Action Now” to be better leaders in their organizations, communities and families.

This talk is designed as a Keynote and is applicable for all audiences. Talk is non-political.

“BASIC TRAINING” LEADERSHIP
The Generals will discuss all aspect of leadership including:
• Leadership vs. Management
• Leadership type and traits
• Leadership challenges in the post 9/11 world

Most Important Leadership Principles and how to apply them to your businesses to maximize productivity and profit.

This program is designed and tailored for leaders at all levels. Primarily a 2-4 hour training session.

WORLD CONFLICTS – GLOBAL TRANSFORMATIONS IN THE POST 9/11 WORLD
In this program, the Generals will discuss the major changes in our world since 9/11 and how they greatly affect our lives and businesses. They will also discuss the military, economic and political effects of the great industrial expansion in China, the demographics in the major countries in the world that are changing our world, and the War against Radical Islam (War against Terrorism) and how leadership will be the key to the success of our businesses and our country.

This talk is designed as a Keynote and is applicable for all audiences. Talk is non-political. It is especially applicable for businessmen and women who are involved in international business.

NOTE: In addition, both Generals are available at no additional cost for an additional program on Supply-Side related issues (General Pagonis) and Terrorism and World Affairs (General Halley) or After Dinner Remarks.

When it comes to expertise in logistics and overall leadership in management of very complex projects and organizations, few people are better qualified than Gus Pagonis, a retired three-star US Army General. Lieutenant General Wm Gus Pagonis is widely recognized for his logistical achievements particularly during Desert Shield/Storm. After successfully masterminding logistics for the Gulf War and winning high praise from General Norman Schwarzkopf, Pagonis left the Army in 1993 and was elected Executive Vice President of Logistics for Sears Roebuck & Co. As head of the Sears Logistics Group, he functions as the single point of contact for all Sears’ logistics and is responsible for Vendor Relations, Distribution, Transportation, Home Deliveries, Outlet Stores, International Logistics, and the integration of Information Systems to cement it all together.

Sears, dismissed as a dinosaur only a few years ago with its earnings and customer base dwindling, has suddenly become a star of the retailing universe. Pagonis has been one of the key players in the turn around of Sears. He explains, “The secret of logistics is never to lose sight of who the customer is.”
Pagonis has proven himself as a leader within the United States Army as the chief logistician during the Gulf War, and today, in the corporate world, he continues to set new standards for leadership. As he says, “I think Corporate America is waking up to logistics as the last frontier. It’s the place where people can really maneuver to get a competitive edge.”

Leadership is nothing more than the art of influencing others to achieve desired results. Yet, this simple procedure of influencing seems to be a dying art. The country is always searching for leaders in government and the corporate world to take organizations and individuals to new heights.

Pagonis will discuss this leadership shortfall and will offer leadership practices and management techniques he has employed in his careers that achieved desired results for organizations he has led.

Pagonis discusses two models he has developed to promote corporate success by tapping the last business frontier- Logistics & Leadership. His “Logistics Pentagon and Three Star Leadership Models” will provide real world solutions that have been successful in military and corporate worlds. Solid proven logistics concepts and down to earth leadership techniques that you can select for your particular leadership style will be discussed in his “Leadership Tool Kit”.

Lt. Col.  Nick Halley (U.S. Army, Retired) is a recognized expert on leadership and terrorism You might recognize him from his many appearances as a terrorist expert on the national FOX News Network and on WGN-TV in Chicago. He was a combat commander, in Vietnam, Grenada, and Desert Storm. He is an army paratrooper, Army Ranger and Special Operations veteran. He has been awarded many significant decorations, including two Silver Stars for bravery in combat actions, four Bronze Stars, and two Purple Hearts for wounds in combat operations.

In addition to his combat commands, General Halley has had a wide variety of assignments, including assistant professor of mathematics at West Point, assignments to the U.S. embassies in both Korea and Japan, and many years with the Army’s premier paratrooper division – the 82nd Airborne Division at Fort Bragg, NC.

His final active duty assignment was the Commanding General of the artillery and rocket forces in Desert Storm, where he commanded tens of thousands of our soldiers in the most challenging leadership environment – combat.

General Halley is a recognized expert on change management and integrity. His leadership expertise was learned and developed under the most stressful conditions — combat. His impressive background as a senior leader in the military, government and corporate worlds include:

Since his retirement from the Army, General Halley has had a distinguished civilian career at the Director / Vice President / General Manager level with several prestigious international electronics firms, including Motorola.

General Halley is a graduate of the United States Military Academy at West Point and the Army War College. He holds a master’s degree in nuclear physics from the University of Virginia. 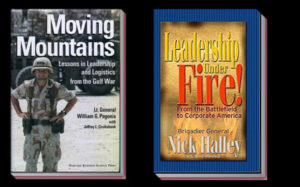