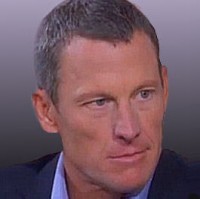 Lance Edward Armstrong is an American former professional road racing cyclist. Armstrong has won the Tour de France seven consecutive times between 1999 and 2005. He is the founder of the Livestrong Foundation, originally called the Lance Armstrong Foundation, which provides support for cancer patients.

Armstrong retired from racing on July 24, 2005, at the end of the 2005 Tour de France. Armstrong’s athletic success and dramatic recovery from cancer inspired him to commemorate his accomplishments, with Nike, through the Lance Armstrong Foundation, a charity founded in 1997. The foundation’s yellow “Livestrong” wristbands, first launched in 2004, have been a major success, netting the foundation more than $60 million dollars in the fight against cancer, while helping Armstrong become a major player in the nonprofit sector

Seven time winner of the Tour de France, two time Olympian riding in both the 1992 and 1996 Olympics, renowned humanitarian, and cancer survivor, Lance Armstrong is the embodiment of all that defines inspiration.

Lance’s personal charisma and passionate commitment to life don’t just stop at the finish line – a hero at every level, his depth of character and generosity of spirit can be found off-track in his work with his Foundation in Austin, Texas.

Lance touches lives far beyond the world of sports. He is among the most recognized celebrities in the world, and has won almost every major award granted by sports and non-sports organizations alike, from Sports Illustrated’s “Sportsman of the Year” to Barbara Walter’s “Most Fascinating Person”. His wildly successful autobiography, “It’s Not About the Bike: My Journey Back to Life”, lived on the New York Times best-seller list for 52 weeks.

The Lance Armstrong story is not only of elite athletic performance, but also one of great human courage and perseverance. He is a survivor, a champion, and a hero for this and all times.

Lance is a book author and co-author including “It’s Not About My Bike: My Journey Back to Life”, and “Every Second Counts” with Sally Jenkins (contributor), and “The Lance Armstrong Performance Program: Seven Weeks to the Perfect Ride” with Chris Carmichael & Peter Joffre Nye (contributor).