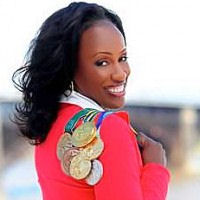 Three-time Olympic Gold Medalist Jackie Joyner-Kersee has built one of the most illustrious athletic careers in the world of track & field. Her performance in the heptathlon and long jump in the 1984, 1988 and 1992 Summer Olympics, made her a legend.

But her talents are by no means limited to athletic ability. Her drive and commitment are evident in all of her projects, including the JJK Community Foundation – which she created to support the development of leadership programs in urban areas across the United States – and her own sports marketing firm, JJK & Associates. Jackie Joyner-Kersee has set over 18 athletic records, received over 24 recognition awards, is a successful businesswoman, respected community leader, and a dynamic motivational speaker who inspires audiences to go after their dreams with passion and commitment.

Joyner-Kersee has recently embarked upon a nationwide effort to enhance the comprehensive health of our nation’s communities through the promotion of healthy lifestyles. She has been asked by the United States Department of Agriculture to promote My Plate, the replacement for the food pyramid. She has also joined forces with the 77-year-old Farm Foundation to address the availability of healthy foods in challenged communities throughout the United States. In addition, she just completed a series of internal Public Service Announcements to promote the use of the agency’s online products.

FULL BIOGRAPHY
• Olympic Gold Medalist
• “The World’s Greatest Female Athlete”
• Children’s Healthcare Advocate
Born in 1962, in East St. Louis, Illinois, Jackie Joyner Kersee came from very humble beginnings. To this day, she is still humble and loves to give back to the community despite having been dubbed ‘The Greatest Female Athlete of the 20th Century’ by Sports Illustrated.
Jackie’s athletic accomplishments are world renowned and are literally second to none. By the conclusion of her career in the heptathlon and long jump events she had amassed 6 Olympic medals and 4 World Champion titles. Jackie was the first woman in history to earn more than 7,000 points in the heptathlon, and today, over 20 years later, she still holds the world heptathlon record of 7,291 points. She continues to hold the Olympic and national records in the long jump, and her 1994 performance in the long jump remains the second longest in history. In addition to heptathlon and long jump, Jackie was a world class 100m and 200m runner and, after a decorated All-American career in basketball at UCLA, she eventually played professional basketball for a short time.
Less well known, however, are Jackie’s tireless efforts and remarkable accomplishments off the field as a philanthropist and an advocate for children’s education, health issues (in particular asthma from which she has suffered throughout her life), racial equality, social reform and women’s rights. Never one to be classified as merely an athlete, Jackie says, “I strive to be a Jackie of all trades.”
Jackie Joyner Kersee has received many prestigious awards, including the St. Louis Ambassadors Sportswoman of the Year, Sporting News Athlete of the Year Award (the first woman to receive either of these awards), the Sullivan Award, and consecutively winning the Jesse Owens Memorial Award. She is available for speaking engagements, personal appearances and autograph signings.