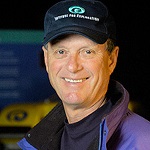 Watery images of the once-glorious Titanic were some of the most enchanting and enthralling images of recent years, something most people only dream of seeing in real life. For Robert Ballard they represented a concrete accomplishment, and just one in a series of triumphs. World-famous for his discovery of the Titanic and the Bismark, Ballard leads audiences on a journey to uncover some of history’s greatest mysteries. Ballard’s adventurous spirit is matched by a practical and hugely successful approach to goal setting, team building and execution.

The skills that led to his headline-grabbing accomplishments are the same skills that now lead people from all walks of life toward a realization of their dreams. A renowned scientist and explorer, he is the author of 16 books, most recently Collision with History: The Search for John F. Kennedy’s PT 109. Most recently Ballard has turned his sights on ancient history, with the discovery of the largest concentration of ancient Roman ships ever found under the sea. The man who made some of the most startling undersea discoveries in recent years, Robert Ballard describes what it was like to locate the Titanic, among other sunken famous ships.

Living the Dream
Dr. Ballard speaks about how he has turned his dreams into reality by taking risks and learning how to face failure and turn it into success.

The Personal Account of How the Titanic Was Found, and a Look into the Future
Dr. Ballard shares his incredible story of the significant discovery of the Titanic, the advanced technology he used for this world famous expedition, and what’s ahead for the future in deep sea exploration.

Deep Sea Exploration
Dr. Ballard shares his conclusions of his numerous expeditions to search for, locate and document sites of historical significance and the emerging science of deep water archeology.

On a cold April night in 1912, the magnificent new liner R.M.S. Titanic struck an iceberg and sank beneath the icy waters of the North Atlantic. The following day the words “TITANIC LOST” shocked the world. Seventy-three years later, on September 1, 1985, the headline would proclaim “TITANIC FOUND” as explorer Dr. Robert Ballard and his team found this mighty legend in its watery grave 12,000 feet down.

A descendant of Wichita gunfighter Bat Masterson, Ballard was born in Wichita, Kansas, where his grandfather, a U.S. Marshal, was killed in a gunfight – explaining why he sometimes refers to himself as a high-tech cowboy.

He is presently president of the Institute for Exploration in Mystic, Connecticut, professor of Oceanography at the Graduate School of Oceanography at the University of Rhode Island, a scientist emeritus in the Department of Applied Ocean Physics and Engineering at the Woods Hole Oceanographic Institution, member of the Presidential commission on Ocean policy and founder of the JASON Foundation for Education.

During his long career, Ballard has led or participated in over 110 deep-sea expeditions and logged more hours in the deep than any other marine scientist in the world. Beginning in the early 1970’s, Ballard undertook a series of increasingly daring expeditions to places on the ocean bottom that had never been seen by human eyes. These expeditions included: the first manned exploration of the Mid-Ocean Ridge, the discovery of warm water springs and their exotic animal communities in the Galapagos Rift, and the first discovery of high temperature “black smokers” and important mineral deposits. Insight, which has helped to understand the early origins of life on our planet and the possibility of finding life elsewhere within our solar system.

Interestingly, these significant contributions to science, while heralded by the scientific community were not widely recognized by the general public because their significance was not fully understood. However, the public did fully understand, appreciate, and respond enthusiastically to his discovery of the wreck of the R.M.S. Titanic – much to the surprise of the scientific community.