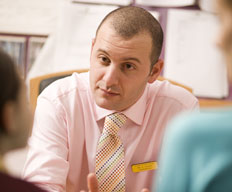 An educator who transformed one of the worst schools in Great Britain into a top performer, Richard Gerver has a unique approach to transformation, leadership, creativity and innovation. He is one of the world’s foremost thinkers on education and author of Creating Tomorrow’s Schools Today. At the age of only 32, he was appointed as principal of The Grange School, one of the worst performing schools in Great Britain. Suffering from low morale, an acute aversion to risk, lack of creativity, poor channels of communication and low levels of engagement, Gerver led dramatic change.

In less than two years, the Grange School was a model of transformation and innovation. Two years later Gerver was working with Tony Blair’s government as an advisor on education policy and his work was celebrated at the UNESCO World Arts Education Conference. He’s won a National Teaching Award among many honors and is profiled in Sir Ken Robinson’s book, The Element: How Finding Your Passion Changes Everything. With his trademark humor and insight, Gerver shares his experience on cultural and organizational transformation, human development and management with groups around the world.

Gerver’s unique teaching formula is a blend of simple ingredients – communicate with impact, empower those in your charge – but the underlying techniques he has developed are powerful enough to make learners of all ages feel inspired. His is the ultimate turnaround tale, and a step-by-step guide to unleashing human potential.

The New Education Age: It’s more about the future and less about the past
The mass education system that the vast majority of us experience was created for a different time and place; it was created to control and maintain structures, systems and stability. For generations it worked reasonably efficiently; people knew what routes led to what kind of lives; professional, blue or white collar. An education that led to a higher qualification guaranteed certain opportunities and life choices for example.

Times have changed; economic shifts, social and environmental upheaval and most importantly the rise and exponential development of new technologies have left society breathless and ill prepared for the challenges that face our local, national and global futures.

Education defines the success of a society’s ability to control and manage change yet education has changed little since the extraordinary shift in the way life is led in the 21st century, as a result we are caught in a world where people are scared and often paralysed by the prospect of change, we are being overwhelmed by crises of global proportions around the economy, the environment and socio ethnic cohesion.

The world has created the most sophisticated generation of consumers we have ever seen; the ‘on demand’ generation. To them, much of what the formal education system offers is out-dated and irrelevant.

If we are to prepare our children for their futures, education needs to radically rethink its purpose, its approach and its values. In his keynote presentation, Richard Gerver will explore the challenges we face, the questions we need to ask and the routes we need to take if our legacy for our young is to be one of success and empowerment.

Lead Happy!
Recent surveys of employee satisfaction in both the US and Europe show that most people see happiness rather than financial reward as the most important factor in their working lives, citing shared, clear and tangible vision and values as the crucial defining factors. At the heart of any successful leadership and management strategy must be a sense of empowerment felt by every member of the team; that starts with a strong shared and implemented vision. In this speech Richard shares his experience of leading and managing vision development and transforming organisations through employee empowerment.

Schools for the 21st Century
In his keynote Richard will urge us all to focus in on our moral imperative as educators; to prepare our children for their futures. He will explore the challenges that our students face now and in their adult lives, challenging us to look beyond conventional thinking and practice and to ask questions of a new paradigm; he will highlight the need for leadership, a new type of strategic thinking and a new professional mindset. He will look at the notions of creativity, risk, skills and knowledge and will share his thoughts on how we make learning matter to the most sophisticated generation of consumers the world has ever produced. Richard believes in practice not theory and as such, will also share some of the work he and his staff developed at the world famous Grange School. The keynote will explore new ideas and thinking linking the future of education with organisations such as Pixar and Harley Davidson. Provocative, amusing and dynamic; Richard’s presentation will leave people with challenging and inspirational pathways for the educational journey ahead.

Culture Shock: How to lead organizational change
In a world obsessed with outcomes, where everything is high risk, high speed and high pressure; how can we even begin to lead our teams through times of accelerating change? How do we find ways to communicate, empower and explore new approaches? Richard will explore the key themes of future visioning, development and leadership, using his experiences of leading a complex organisation on the verge of failure through a massive cultural shift to a point of global recognition.

Tiggernometry: Adding Bounce to Your Life
How to stay positive in a negative world. The world is changing faster than ever. Keeping up is exhausting. A lot of people get stuck in moan mode – a rut of ‘sameness’ where the days and weeks flash by in a blur. Staying positive is a massive challenge. It requires energy. Tigger manages it and the good news is that it’s totally achievable. And this session aims to tell you how! Richard can cover life, change, energy, habits, thinking styles, education, business and how to retain your bounce in a turbulent world.

Creating Tomorrow’s Schools Today
This keynote, based on Richard’s best selling book, explores the process of curriculum design, provoking the questions that schools need to generate if they are to develop curriculum approaches that are fit for the future. It explores skills based approaches that are rich in context and purpose. He can share his experiences of developing a curriculum that became a powerful model for the QCA reviews at KS3 and Primary, The 2020 report and The Alexander Report. The session can be tailored to focus on BIG THINKING or THE GRANGE MODEL including planning methodology or a mixture of the two. The sessions can be designed to be highly interactive and can also involve the opportunity for colleagues to question Richard about his experiences and the Grange Methodology. These sessions can also include insights into leading a community through Curriculum transformation.

Leading into the Unknown
This session explores the development of education systems fit for purpose in the future. It looks at the issues facing schools and colleges today: behaviour, standards, testing and curriculum. Richard offers his unique perspective and insights into the challenges that face us all in leading our children into the unknown.

Out of The Ordinary – The Grangeton Story
An inspirational journey that charts the phenomenal rise and transformation of Grange Primary School into one of the world’s most celebrated education establishments. Highlighting the highs and lows, Richard shares his experiences and the innovations that lead to the school’s extraordinary success; hear about the town run by the kids that includes a TV Studio, Radio Station, Café and Museum, The University and the Curriculum that is helping to define future models around the world.

From Hoodie to Hero – Harnessing the Power of the Next Generation
Our children have been written off as knife-wielding drunks with a disregard for society, citizenship or hard work. This session explores the world our kids live in and examines the roles we play as educators and business leaders in making the most of their extraordinary potential. From Hoodie to Hero is essential for anyone parenting children or managing an employee under 25 years old. The future is better than we think!

Beyond the Pane
In a world where the last 20 years has seen the development of the internet, social networking and a rising fear for the planet and the economic future of its people. It has been virtually impossible for us to stop running long enough to take a breath and plan for tomorrow in a proactive and purposeful way. The impact of change on us has been exhausting. This session explores the future, our part in it and how we get the best from our people. 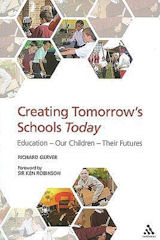 Richard Gerver has been described as one of the most inspirational leaders of his generation. He argues however, that great leadership is about serving the needs of the people that work for you and rely upon you. The three core principles that underpin Gerver’s philosophy are communication, empowerment and impact.

Richard began his working life as an actor who worked as an advertising copywriter to make ends meet. He began a teaching career in 1992 and rose through the ranks fast being identified by the school’s inspectorate in 1997 as one of the most outstanding teachers in the country. By 2005 he had won the prestigious “School Head Teacher of the Year Award” at the British National Teaching Awards for his work in leading a school on the brink of closure to becoming one of the most innovative in the world. Richard developed his organizational philosophy of living, learning and laughing which reached his full development during his time as Head Teacher.

By 2003 Richard was working with Tony Blair’s Government as an advisor on education policy. In 2006 his work was celebrated at The UNESCO World Arts Education Conference in Lisbon, Portugal and in the same year he was invited to Shanghai to speak about education transformation to members of the Chinese Government.

Richard’s work and philosophy has been widely reported in the media around the world from the US to Russia, Australia to The Netherlands. Richard still plays a part in education; he was a co-founder of The Curriculum Foundation. He works around the world sharing his experiences and expertise and has advised The Blue Man Group as they develop their own school in New York. He is about to launch two new consultancy teams to help provide support beyond his speeches; Think Again Education and Think Again Change.

Richard works closely with Sir Ken Robinson on developing the awareness of human potential and creativity and features in Robinson’s best-selling book, The Element: How Finding Your Passion Changes Everything. He also works as an author and media commentator and is a regular contributor in the British print media; writing for The Times and The Daily Telegraph, as well as on the BBC – most recently on breakfast television and The Politics Show.

Richard’s global best-selling book, Creating Tomorrow’s Schools Today deals with education transformation, his second, due by the end of 2012, deals with human capacity and leading change.

The combination of his experience and his open, passionate delivery, means that his presentations are in demand throughout the world. Richard shares his expertise and experience on cultural and organizational transformation, human development, leadership, creativity and innovation. He has worked with some of the world’s largest organizations including HBOS, SKANSKA, The British Council and RBS. Most recently he has been working with a large number of businesses to help them understand the visioning needed to overcome the fear and emotional uncertainty caused by the current economic crisis. His passion and expertise mean that his presentations are always well-received and inspire audiences to new challenges.