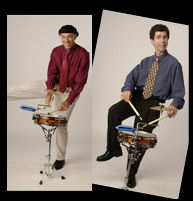 Barry Friedman and Dan Holzman are the Raspyni Brothers. Individually, they’re just two guys, but as The Raspyni Brothers, they create hilarious events that corporate audiences never forget. They understand the importance of corporate entertainment and they work hand-in-hand with you to get it right. You could put that responsibility into hands less-capable than these four-time World Juggling Champions with over 200 national television appearances and 1,000 successful corporate shows, but we don’t recommend it.

And now, five little known facts about the Raspyni Brothers:

Headline Comedy
Everyday objects come to life in their talented hands. Golf clubs balance in impossible configurations and cabbages collide midair with flying blow darts while blazing torches, 16-pound bowling balls and razor-sharp garden weasels fly effortlessly overhead. Using audience participation, hilarious improvisation, and great comic dialogue, the Raspyni Brothers pack their time on stage with a dynamic mix of skill and style. Performing together since 1982, these two catchers in the wry never fail to win over even the most demanding, hard-to-please crowds.

Keynotes
Johnny Carson and Jay Leno have both done it on The Tonight Show – and now your CEO can do it too! Let the top-brass prove their commitment to success by standing between the blazing torches and razor sharp knives of the Raspyni Brothers. Nowhere are success principles such as teamwork, time management, risk-taking, and competitive excellence illustrated with more wit and wisdom than during this keynote presentation. Juggling the Principles of Success entertains as it educates, leaving the audience enthusiastic and highly-motivated about achieving greater levels of success in their professional and personal lives.

Morning Meetings
An appearance by the Raspyni Brothers wakes up a morning meeting faster then a dozen Starbucks double cappuccinos. They are the perfect way to energize the crowd and set an enthusiastic, upbeat tone for the day. In fact, nothing says “wake up” faster then flying machetes and 16-pound bowling balls. Their flexibility allows them to perform programs of variable lengths. Whether this talented twosome is part of a quick skit or full length program, they will catch your audience off-guard, with an energy and intensity that should be illegal so early in the morning. Start your day with a jolt. Focus and energize your crowd after a late night of convention festivities with an act that’s well-rested, ready, and raring to go.

Product Launch
The anti-gravity antics of the Raspyni Brothers will blast your next product launch into the stratosphere. Their comedy and juggling acts are the perfect illustration of the type of teamwork and calculated risk-taking necessary to bring a new product to market. Granted, they weren’t there when the first Model T rolled off the production line, but very few performers have had as much experience as the Raspyni Brothers when it comes to these very special events. Their time-tested skill lets them seamlessly blend a product’s key features and selling points into their one-of-a-kind comedy routines. And of course, nothing motivates a sales force like seeing a member of senior management prove their commitment by being part of a Raspyni Brothers’ bull whip or knife throwing routine. Aim high! Fuel and ignite your next product launch with two of the comedy world’s brightest stars.

Trade Shows
Standing room only crowds are guaranteed when the Raspyni Brothers hit the trade show floor. Performing a rapid-fire routine that effortlessly weaves your key bullet points with uncontrollable laughter. Following each performance, your sales team greets prospects that are informed, excited, and educated about your product. Your booth will be truly unforgettable with incredible audience participation stunts, choruses of non-stop laughter, and 10 spinning basketballs that draw unwavering attention to your company logo. Barry and Dan have shattered the expectations of their clients at NetWorld Interop, Comdex, the International Home Builders’ Show, Internet World, MacWorld, and countless others. The crowds will be huge. Your message will be powerful. Make it all about you.

Brain Breaks
The Raspyni Brothers provide the perfect entertainment sorbet to cleanse your audience’s intellectual palate. Each of their appearances is excellently prepared and perfectly timed to break up long information-heavy sessions. Whether it’s over the course of an entire day, or those long award ceremonies that sometimes feel like an entire day, Barry and Dan create an atmosphere of anticipation and fun that keeps a crowd’s energy up from start to finish. Their menu of comic material is over three hours long. Items like an all-you-can-eat buffet of funny -dig in!

Emcee
You’ve had emcees in the past and you know what to expect – OR DO YOU? The Raspyni Brothers use their unlimited myriad of skills to keep meetings moving and on time. They present awards, introduce speakers, run general sessions, and make housekeeping announcements with a humor and flair that will keep your audience on the edge of their seats. Leverage the Raspyni Brothers’ experience in the field of corporate entertainment. Create camaraderie, insure attentiveness, and make it memorable with the absolute professionalism of this incomparable duo.

Barry Friedman and Dan Holzman are the Raspyni Brothers. Barry Raspyni was born with, and still has, the heart of a child.

Since his arrival on Income Tax Day in 1962, the taller Raspyni Brother has skyrocketed to an imposing 6′ 1″, while maintaining a very sleek 174 pounds. After extensive review of archive footage however, it is obvious that he looks both taller and heavier on television.

Moments after bumping into Dan Raspyni at a park in 1981, Barry was jolted from his path of mediocrity and knew his future would be bright.

The following summer he and Dan traveled the country performing a show that was made up as they went along. It was the time of his life. All these years later, it still is, but occasionally, Barry reflects on what might have been: pizza chef, forklift driver, or perhaps computer repair technician.

He is domestic, yet international. Recently, during a single week, he had breakfast on the Champs Elysees on Wednesday, and was raking his yard on Friday. He is a commercial pilot, can communicate in Morse code at upwards of 35 words per minute, and converted his VW Westfalia to a real vehicle by single-handedly outfitting it with a Subaru engine.

His intent is to never fully grow up. Dan Raspyni was born in 1961 by Immaculate Conception (at least that’s what his mother says). His formative years were spent in the culturally deprived paradise that was California’s San Fernando Valley in the 1970s. Wanting the easy money and warped reality enjoyed by child movie stars, he began taking speech and acting classes. At age eleven, he landed a supporting role in the cult horror classic, It’s Alive.

After graduating from high school in 1978, he applied to the school of hard knocks, but was rejected because he had too much money.

In 1980 he set out on a quest to find the long lost brother he never had. After years of searching high and low, he started looking in the middle. It wasn’t long before he located his unrelated sibling, Barry Raspyni, and the rest is history (or to be more accurate, their story).

Dan Raspyni enjoys tournament-level ping pong, internet poker, watching movies, and eating bland foods that are low on the glycemic index. An avid reader of high-brow literature, it’s not unusual for him to read two celebrity tabloids in a single day.

Dan lives in San Francisco with his lovely wife Karen, their two pets, and a house full of furniture.