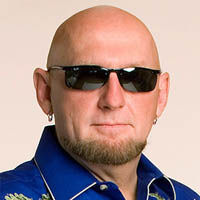 Larry Winget, the “Pitbull of Personal Development,” is author of numerous New York Times and Wall Street Journal best-selling books, including Shut Up, Stop Whining & Get A Life: A Kick-Butt Approach to a Better Life, It’s Called Work for a Reason: Your Success Is Your Own Damn Fault, You’re Broke Because You Want to Be, People Are Idiots and I Can Prove It!, Your Kids Are Your Own Fault: A Guide for Raising Responsible, Productive Adults, and The 10 Ways You Are Sabotaging Yourself and How You Can Overcome Them.

A motivational speaker who is edgy, cantankerous, sarcastic, opinionated and hilarious, Winget is a one-of-a kind speaker who audiences demand time and time again. Without ever mincing words – much as in his writing – he delivers the cold, ugly truth in a way that is provocative, interesting, and funny.

Winget starred in Big Spender on A&E, and has appeared on CNBC’s The Millionaire Inside and The Big Idea with Donny Deutsch; NBC’s Today; Fox News and Fox Business Channel with Neil Cavuto; CBS’s The Early Show, and a multitude of newspapers, magazines and radio shows.

Winget started his professional life as an award-winning salesperson and then a top-ranked sales manager for AT&T. He later started three companies from scratch and built them into successful, thriving businesses. He has spoken to nearly 400 of the Fortune 500 companies throughout the world, and has been recognized for his exceptional contributions to the speaking profession by being inducted into the International Speakers Hall of Fame.

The Truth Be Told
This is Winget’s most popular keynote address and is based on his two bestsellers, Shut Up, Stop Whining & Get A Life and It’s Called Work For A Reason.

How To STOP Getting By and START Getting Ahead
Larry Winget has become a financial guru to many people because of his work on Big Spender, his appearances on CNBC’s The Millionaire Inside, The Today Show, Fox News and more. This dynamic keynote is based on Larry’s #1 Bestseller, You’re Broke Because You Want To Be.

Your Kids Are Your Own Fault: A Guide To Raising Responsible, Productive Adults
In this program based on Winget’s best selling book by the same name, he gives clear guidelines for what parents must teach their children in order to create successful, financially responsible adults with a strong work ethic, who know how to give their word and keep it and live their lives based on honesty and integrity.

Larry Winget is the best branded, most recognizable speaker in the business. Many speakers claim to be original, but Larry Winget is THE original. He has established himself as an icon in the world of personal development and self-help. You won’t find many people who don’t know who won’t recognize him as a result of his five national bestsellers, his thousands of on-stage appearances or his many regular television appearances. Larry was the first to be willing to take on the “positive attitude” motivational speakers and the Law Of Attraction bozos with his common sense, back to the basics approach. Larry still believes that hard work and excellence are the keys to success and communicates that like no other person on the planet can!

Larry makes you think. He makes you uncomfortable. He offers common sense solutions that are impossible to argue with. On top of all that, he is hilarious.

And remember this: Larry actually speaks. What does that mean? Don’t you remember when speakers had original content and were able to mesmerize an audience with just their words and didn’t have to rely on a PowerPoint slide show or video clips? Larry does.

Larry is the best combination of credible content as backed up with his 5 bestselling books – award winning speaking performance and experience from having spoken to nearly 400 of the Fortune 500 – and an element of celebrity from his continuous television appearances.

He is a philosopher of success who just happens to be hilarious. He teaches universal principles that work for anyone, in any business, at any time, and does it through simple examples, understandable, easy-to-implement ideas and funny stories.

Larry believes that most of us have complicated life and business way too much, take it way too seriously and that we need to lighten up, take responsibility, be more flexible and keep it all in perspective.

He teaches that business improves when the people in the business improve and that everything in life gets better when we get better and nothing gets better until we get better. His style is confrontive and he won’t let you off the hook. He leaves you nowhere to turn but to yourself. Yet his motive is one of love and service. He sincerely wants everyone to do better, have more and know that they can.

He is one of the true characters in the personal/ professional development industry. As an internationally recognized speaker and author, audiences of every type have enjoyed his humorous, thought-provoking, transformational style.

You don’t want to miss this rare opportunity to experience what Larry has to say!