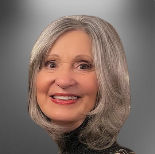 KATHY BUCKLEY –   Hearing impaired Comedian, Thought Leader,  Motivational Keynote Speaker and Best-Selling Author who uses comedy to help audiences understand their gifts, their peers, and their choices.  Kathy Buckley inspires audiences to overcome adversity by listening to the mind and heart together.

Kathy Buckley is a motivational speaker and best-selling author who uses comedy to help audiences understand their gifts, their peers, and their choices. A five-time American Comedy Awards Nominee for Best Stand-Up Female Comedienne, Kathy’s keynote speeches about her challenges interweave humor and storytelling to help people bring more compassion to others—and to themselves.

With decades of experience motivating millions of people around the world, Kathy has been a featured speaker at Tony Robbins’ Life Mastery classes, where the U.S. Air Force and U.S. Army formally recognized her outstanding efforts toward disability employment awareness. Recently, one of Kathy’s speeches recently went viral—64 million views and counting!—for its refreshing message about human connection and forgiveness.

Kathy Buckley was born with a hearing loss that went undetected until she was eight and led to believe she was mentally retarded. She was sexually abused, run over by a car, and stricken with cancer all before the age of thirty. Rather than being consumed by grief, Kathy sought out laughter. She not only survived, she has gone on to become a successful comedienne and an award winning author. She is also a world-renowned motivational speaker. Kathy inspires hundreds of thousands of people around the country, sharing her 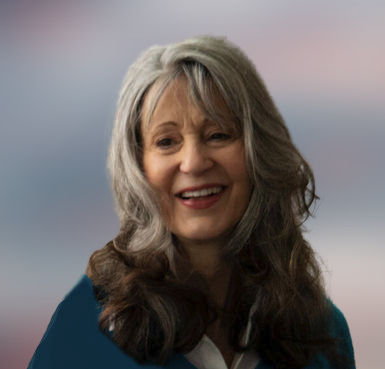 story of overcoming some of the most difficult obstacles one can imagine in life, and how she met those challenges with dignity, courage, and laughter.

In addition to comedy, Kathy is an actress who is also known for her co-starring roles in TV series such as Touched by an Angel and starred in her own original award winning PBS special, No Labels No Limits. An active volunteer for causes close to her heart, Kathy Buckley spends time helping numerous children’s charities. A sought after motivational speaker, she has inspired people around the nation, speaking at corporate events, conferences, and universities.

NO LABELS, NO LIMITS – unlock your potential by removing labels
Kathy talks about the labels that society puts on us and the labels we also put on ourselves. She addresses the fact that we subscribe to these labels, which can even modify our own self-awareness. Kathy inspires her audiences to remove the labels and empowers audiences to make a change, become self-confident, self-aware, and experience self-growth. Kathy’s message will free you and awaken the unlimited potential inside each of us.

THE GIFT OF CHOICE –  your life is your decision
By opening your eyes to the opportunities presented in your life, you become empowered to make decisions. In this inspiring talk, Kathy uses personal examples to show that negativity in our lives is directly created by the negative choices we make. When Kathy was 20 years old, she was run over by a lifeguard Jeep at the beach and pronounced dead by paramedics. Instead of viewing that moment as a tragedy, Kathy saw the event as an opportunity of choice. That day, Kathy made the choice to fight for her life and vowed to live her life to the fullest. By learning from Kathy’s story, audiences will be inspired to make choices that better the lives of themselves, their coworkers, and the world.

A living example of turning lemons into lemonade, Kathy inspires people to determine their life’s course by sharing her own stories of hardship and self-discovery. She is an active volunteer for causes close to her heart, and volunteers at many children’s charities including No Limits, a non-profit organization for children who are deaf and hard of hearing.

If you’re looking to motivate your organization or conference attendees, Kathy Buckley’s keynotes are for you. She’s inspired people around the nation, speaking at corporate events, conferences, universities, and more. Whether performing in a comedy club, appearing on television, speaking publicly, theaters, Carnegie Hall in New York, The Kennedy Center, teaching at camps for children, or appearing in any number of other settings, Kathy Buckley knows that extraordinary becomes reality when the heart and the mind work together.

Gifted comedienne, award-winning actress, accomplished author, and renowned inspirational speaker Kathy Buckley is a force like no other. Billed as “America’s First Hearing Impaired Comedienne”, Kathy Buckley is also a five-time American Comedy Award Nominee as Best Stand-Up Female Comedienne. As an actress, she is known for her guest starring roles on shows such as Touched by an Angel, and for her critically acclaimed one woman Off-Broadway show, Don’t Buck with Me/Now Hear This! As a motivational speaker, she inspires hundreds of thousands of people around the world, sharing her story of overcoming some of the most difficult obstacles one can imagine in life, and how she met those challenges with dignity, courage, and laughter. 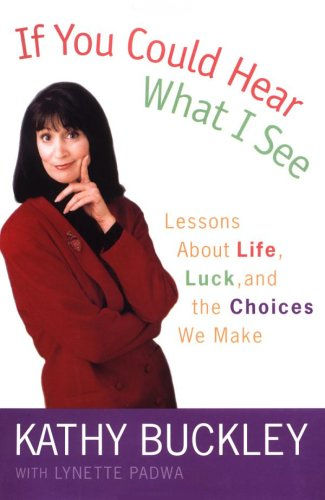 Kathy’s book, If You Could Hear What I See, will have you laughing and crying as you experience the amazing story of her life. She has received thousands of letters and emails of thanks and praise, regarding both her book and her original PBS special, No Labels, No Limits! She was awarded the CINE Golden Eagle Award as the writer and executive producer of the special, and the Media Access Award for Outstanding Television Special. Her highly acclaimed autobiographical theatre play, Now Hear This! had its Off-Broadway premiere at New York’s Lamb’s Theatre, and not only brought the comic actress a legion of faithful new fans, but a wealth of critical praise from New York media. Little wonder, since the production (originally titled Don’t Buck With Me!), first opened in Los Angeles at Hollywood’s legendary Tamarind Theatre, with both Kathy and the show winning the distinguished Los Angeles Theater Ovation Award for Best Writing of a World Premiere Play or Musical and the Los Angeles entertainment industry’s coveted Media Access Award as Best Play of the Year.

Success, however, in the theater or any other medium, was far from mind the first time Kathy stood the world of comedy on its ear. On a dare from a friend, she entered a comedy contest called, “Stand-up Comic Take a Stand”, in 1988. She was nervous. Not because it was her first time performing comedy on a stage or even the fact that she couldn’t hear the audience response except by vibration from the stage floor. What made her nervous was discovering that she was competing against comedians who had been in the business for years.

But, Kathy forged ahead, easily winning fourth place out of over 80 comedians, and soon began touring the U.S., playing major comedy venues like Caroline’s (New York City), Catch a Rising Star (Las Vegas, Reno), The Improv (West Hollywood), The Ice House (Pasadena), The Comedy Store (Hollywood), The Laugh Factory (Hollywood), and many others. In record time, she became one of the most popular comediennes in the country with material based on, among others things, her hearing loss. That impairment, however, is only one of the many hurdles Kathy has encountered in her life. Her poor performance in second grade landed her in a school for mentally and physically impaired children. It took school administrators, psychologists, and audiologists nearly a year to discover it was just a hearing loss and not a lack of mental acuity that was impeding her speech and language development. Today, Kathy shakes her head as she quips to amazed audiences, “… And they called me slow?”

During her late teens, Kathy’s life was interrupted when she was run over by a jeep while sunbathing on a beach. As a result, she experienced intermitted paralysis in her legs. Her recovery took almost five years. Then, just six years later, she was diagnosed with cervical cancer.

Undaunted, she has turned roadblocks into springboards, using her personal experience as launching pads for humor and the education of others.

She was selected from among hundreds of performers to showcase her

talents at The National Association for Campus Activities Convention. That appearance made her a favorite of the college campus circuit.

Kathy’s popular appeal, unique persona, and refreshing sense of humor also attracted the attention of high profile comedy television shows, entertainment news programs, and talk shows. She has appeared on such programs as The Tonight Show, The Today Show, Good Morning America, CBS This Morning, Entertainment Tonight, Extra, Inside Edition, Turner Entertainment Report, CNN’S Show Biz Today, Real Life, and Geraldo. She has been featured in several national magazines, including People as one of their most touching stories of 1997. She has performed on shows such as Stand-Up Spotlight (VH-1), Comic Strip Live (FOX), Evening at the Improv (A&E), and Caroline’s Comedy Hour (A&E), to name just a few. She also served as celebrity guest host for Fox Television Special, Smart Kids, and made a cameo appearance in the ABC Television Movie of the Week, Breaking Free. She was featured in the HBO Television Special, “Women of the Night”, shot on location at the U.S. Comedy Festival in Aspen, Colorado. She included in the E! Entertainment Television Special, The World’s Most Intriguing Women. Kathy was also the focus of I Can Hear the Laughter, an Emmy award-winning documentary.

Although she regularly receives national media attention, Kathy is more than just a popular comic. Her humor has a higher purpose. “My comedy disarms people,” says Kathy. “I love to make people laugh, but I love it even more if I can teach them something at the same time.”

She backs her philosophy by tirelessly performing on behalf of nonprofit and educational organizations throughout the Unites States. She serves as the national spokesperson for No Limits, a non-profit organization, theater group, and school which provides educational programs and accessibility for deaf and hard of hearing children.

Among her many honors, Kathy has received the Woman of The Year Award from the Oralingua School, American Hero Award from the City of Hope as their role model of the year, the Toastmasters International Communication and Leadership Award, the Dole Foundation Media Awareness Award for her dedication to all people with disabilities, the National Council on Communicative Disorders Individual Achievement Award, and the Hear Now Help America Hear award for her commitment to children.

She was also recognized by the U.S. Air Force and U.S. Army for outstanding efforts toward disability employment awareness.

She is a key motivational speaker for Anthony Robbins’ Life Mastery Classes and works to entertain and enlighten people of all ages, but her heart belongs to children. “Every child deserves to have a real childhood,” Kathy asserts. “And they should have healthy role models to show them that people do care about them deeply.” Kathy speaks to the child in all of us.

Whether performing in a comedy club, appearing on television, speaking publicly, teaching at camps for children and teens, or appearing in any number of other settings, Kathy Buckley bears her message that anything can be achieved when the heart and the mind work together.