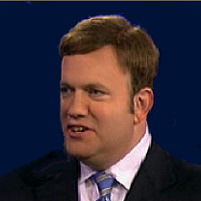 More media outlets have turned to Dr. Frank Luntz for focus groups & consulting than to any other political pollster, making him one of the most honored political and communication professionals in America today. In addition to having worked with ABC News, NBC News, PBS, the BBC, Newsweek, U.S. News and World Report and The Wall Street Journal, Luntz has written and supervised more than 400 surveys for political and corporate clients around the world. Luntz understands that there’s no better way to get employees on board than by letting them hear directly from their customers.

Using focus-group techniques, Luntz can bring your customers to you–live. Using cutting edge technology, Luntz shows audiences, in real time, exactly how customers react. Luntz’s best-selling book, Words That Work: It’s Not What You Say, It’s What People Hear, offers a behind-the-scenes look at how the tactical use of words and phrases affects what we buy, who we vote for, and even what we believe in. He’s also the author of What Americans Really Want . . . Really: The Truth About Our Hopes, Dreams and Fears (2009), and WIN: the Key Principles to Take Your Business From Ordinary to Extraordinary, released in March of 2011.
Focus on Your Organization
Organizations worry about their bottom line, but sometimes forget that bottom lines are often affected by how their customers and vendors perceive their products or services. And many organizations or companies ignore this – at their peril. But changing attitudes and opinions is difficult. That is where renowned pollster Frank Luntz comes in. Luntz will bring your customers to you. Live. He can conduct a focus group in front of any size audience. There is perhaps no better way to “get employees on board” than to let them listen directly to what their customers think. Luntz uses cutting edge technology to show the audience, in real time, exactly how customers react to company communications. From ad testing to sales training to virtually any other interaction with customers, it is impossible to ignore the impact of these sessions on their audience.

It’s Not What You Say, It’s What People Hear
What’s behind winning campaign slogans and career-ending political blunders? Why do some speeches and advertising campaigns resonate and endure while others are so quickly forgotten? The answers lie in the way words are used to influence and motivate, the way they connect thought and emotion. In this presentation, based on his book Words that Work, Dr. Frank Luntz, widely recognized pollster and one of the most honored communication professionals in America today, not only raises the curtain on the art of effective language, but also offers priceless insight on how to find and use the right words to get what you want out of life. Luntz’s engaging and humorous presentation shows you how to transform simple ideas into an effective language arsenal for the war of perception we all wage each and every day.
From Dr. Luntz you’ll learn:

What’s REALLY on the Mind of America
Most public opinion experts can only tell you what they think is on the minds of ordinary Americans, but Dr. Frank Luntz lets ordinary Americans speak for themselves. Through thousands of hours of intense direct response/focus group dial testing, Luntz has his finger on the pulse of every issue Americans talk about today. He will provide expert insight and analysis that can help you, the business leader, the politician, or just the average citizen, understand the thoughts and feelings of the average American.

A Behind-the-Scenes Look at Congress & the Legislative Agenda/A Behind-the-Scenes Look at the White House & Washington
Frank Luntz has the most comprehensive library of presidential debate performances and political advertising in America today. He knows Barack Obama’s words as well as the President himself, having tested the President’s speeches for Fox News, ABC News, PBS and HBO. To some, the halls of power are painted with mystery and intrigue, but pollster and political consultant Frank Luntz has enough experience on Capitol Hill to make him the 536th member of Congress. He will share the wisdom and experience that helped write the Contract With America and bring a party to power after 40 years of failure. Members of Congress from both parties actively seek the help of Dr. Luntz to refine their message and better interact with their constituents. This presentation will give you insight on current and future political issues that every lobbyist, government affairs executive and member of Congress wishes they had.

Dr. Frank Luntz is one of the most honored communication professionals in America today. “The Nostradamus of pollsters,” said Sir David Frost, Time magazine named him one of “50 of America’s most promising leaders aged 40 and under” and he is the“hottest pollster” in America according to the Boston Globe. Frank was named one of the four “Top Research Minds” by Business Week and was a winner of the coveted Washington Post “Crystal Ball” award for being the most accurate pundit. His focus groups have become so influential that presidential candidate Barack Obama had this to say following the PBS presidential debate, “When Frank Luntz invites you to talk to his focus group, you talk to his focus group.”

Dr. Luntz has written, supervised, and conducted more than 2,000 surveys, focus groups, ad tests, and dial sessions in over two dozen countries and four continents over the past decade. Frank has become the go-to consultant when Fortune 100 companies and their CEOs need communication and language guidance, from General Motors to Federal Express, Disney to American Express, from AT&T to Microsoft, from Lowe’s to Pfizer, from Kroger supermarkets to McDonalds to the entire soft drink, hotel, and motion picture industries, as well as for the U.S. Chamber of Commerce, the National Association of Manufacturers and the Business Roundtable. In some capacity he has helped almost 30 Fortune 100 companies navigate the economic climate and connect more closely with consumers.

The “Instant Response” focus group technique pioneered by Frank has been profiled on 60 Minutes, Good Morning America (on Election Day 2008) and on the award-winning PBS show Frontline. He has been a guest on virtually every talk show in America, including Meet the Press, Nightline, The Today Show, Charlie Rose, The Jim Lehrer News Hour, The O’Reilly Factor, Tavis Smiley, Montel Williams, and Hardball. He also served as a consultant to the award-winning NBC hit show “The West Wing.”

More media outlets have turned to Dr. Luntz to understand the hopes and fears of Americans than to any other political pollster. In 2008, Frank was the “Focus Group Czar”for Fox News, conducting over 40 sessions in 14 states, as well as co-hosting four live hour-long prime time specials and dial sessions during every debate. He was a primary night and election night commentator for The News with Brian Williams on MSNBC in 2000 and for Hardball in 2004. His reoccurring segments on MSNBC/CNBC, “100 Days, 1000 Voices” won the coveted Emmy Award in 2001. Frank has conducted focus group sessions for all three major television networks, two of the three cable news channels, PBS and the BBC, as well as for The Wall Street Journal, Newsweek, The New Yorker, and U.S. News & World Report.

Frank is the author of The New York Times best seller Words that Work: It’s Not What You Say it’s What People Hear. Now out in paperback, the book explores the art and science of language creation, and was awarded the 2008 Audie Award for the best business information/educational audiobook of the year. His latest book, “What Americans Really Want … Really” addresses the private hopes, dreams and fears of the American people, and has been nominated for the 2010 Audie Award for the year’s best non-fiction audiobook. He has written about language for The Wall Street Journal, The New York Times, The Los Angeles Times, the Financial Times, The Times of London, and The Washington Post.

When he is not consulting, Dr. Luntz can often be found in front of a classroom. From 1989 until 1996, he was an Adjunct Professor at the University of Pennsylvania. He has also taught courses at Harvard and George Washington University.

Frank graduated from the University of Pennsylvania with honors, Bachelor of Arts degree in history and political science, and was awarded a Thouron Fellowship. He received his Doctorate in Politics at the age of 25 from Oxford University. He spoke for 24 straight hours as part of the Oxford Union Society’s Guinness World Book of Records debate. In the spring of 1993, Frank was named a Fellow at Harvard University’s Institute of Politics, the second youngest individual ever to receive this honor.