What is a Flash Mob?

A Flash Mob is a spontaneous public performance that appears seemingly out of nowhere with just one person, grows to many people, then quickly disappears. Flash Mobs strive to CREATE JOY THRU SURPRISE. People who participate in a corporate flash mob feel like they’ve gotten to be a part of something special!

In 2009, moved by Michael Jackson’s emotional memorial, Staci Lawrence and Conroe Brooks produced the first American tribute to the late King of Pop by recreating Sweden’s “Beat It” flash mob. Universal Music Group hired the dynamic duo to produce a flash mob to surprise the late pop icon’s sister, Janet Jackson. The national attention spread like wild fire and Flash Mob America was born. Staci and Conroe – now recognized in the industry as the experts in the field – worked nonstop to grow Flash Mob America into a full-service flash-mob production company. 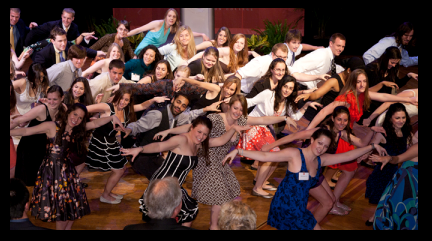 Corporate Events:
• Secretly recruit spouses to be the “flash mobbers” !
• Add excitement to meetings!
• Close your conference with a surprise bang!
• Interrupt a presenter (with permission, of course) !

Entertainment:
• Add life to your events!
• Get your attendees dancing after being wowed by a flash mob!

Raised in San Jose, California, Conroe’s dreams always involved the arts. At the age of 18, he sang in the R&B group Special Generation (the brainchild of MC Hammer). And at the age of 21, he relocated to Los Angeles where his first audition landed him the role of Sam Cooke in “Little Richard,” whose director Robert Townsend said to him: “I hired you because you had the spark in your eye.” Little did he know that spark would one day inspire so many.

From there, Conroe went on to star in the Showtime movie “2G’s & a Key” before working with the legendary director Garry Marshall in developing “Happy Days” the musical and ultimately landing roles in such television shows as “Heroes,” “24,” “FlashForward,” “Sons of Anarchy,” “The Unit” and “Will & Grace.”

A creative visionary, devout people person and master motivator, Conroe utilizes his passion for performing to create joy through surprise, ultimately empowering others to do their part in accomplishing the very nature of flash mobbing and a cause very close to his heart – giving back to the community.

After college, Staci moved to Los Angeles where she performed in, directed, and produced a number of projects. She’s since appeared on the big screen in “Fun with Dick & Jane,” starred as a recovering anorexic in the indie film “Disfigured” (nominated for a PRISM Award) and co-produced “The C-Word,” a weekly stand-up show at the world famous Comedy Store. She most recently appeared on “The New Normal” and is currently filming a recurring role on NBC’s “1600 Penn.”

An ardent producer, driving creative force, and leader in the community, Staci utilizes her passion for dance and bringing people together to create joy through surprise, ultimately empowering others to do their part in accomplishing the very nature of flash mobbing – giving back. “That’s why Flash Mob America is such a dream come true,” says Staci. “Not only am I dancing again, but I also get to support so many worthwhile causes.”