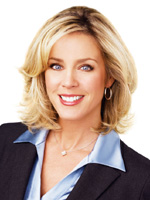 A veteran news anchor, Deborah Norville speaks with candor and humor about handling life’s curves, juggling career and motherhood and the rough road to reach your dreams. Her meteoric rise from regional reporter to co-host of Today was the stuff of legend, and the subsequent challenges she faced—played out in a media fishbowl—have made her one of the most admired women in journalism and a true inspiration. Norville shares the challenging journey that brought her back from depression and uses her own struggle to help audiences face their challenges and gain strength and wisdom from lessons of the past.


Currently the anchor of the nation’s top-rated syndicated news magazine, Inside Edition, Norville covers the most complex and challenging issues of the day. Since joining Inside Edition in 1995, she has led the show to higher ratings and to a position of strength and respect. A two-time Emmy award-winner, Norville joined Inside Edition from CBS News. She is author of the best seller Back on Track, two highly-acclaimed children’s books and her latest book, The Power of Respect: How You Can Benefit from the Most Forgotten Element of Success .

The Power of Respect: Benefit from the Most Forgotten Element of Success
Can “respect” really make a difference in today’s fast-paced world or is it just a quaint-throw back to a less complicated time? Based on her new ground-breaking book, Deborah Norville shares with audiences the compelling evidence that adding an element of respect results in measurable, meaningful benefits in almost every area of life. Using peer-reviewed academic literature, Norville discusses:

Thank You Power
Thank You Power is the extraordinary force that comes simply from acknowledging the “good things” in life. Beginning with the regular practice of counting one’s blessings and feeling thankful for them, one can become healthier, happier, smarter, more resilient and even able to undo the negative effects of stress. Nationally known journalist Deborah Norville brings her reporting skills to bear in her presentation “Thank You Power” to highlight the exciting research proving the life improvements that can stem from the practice of gratitude. In “Thank You Power,” you will learn:

Back On Track: How to Keep Your Life Together When it Seems Like Everything (and Everyone) is Trying to Pull You Apart
In a refreshing, lighthearted talk Deborah Norville looks at the challenges we face today in daily life and offers first hand tips on coping with the many responsibilities we have as well as refocusing ones life when it seems one has lost direction.

Veteran journalist Deborah Norville has been anchor of Inside Edition since March 1995. Ratings jumped 15% the week the two-time Emmy© joined the series, which is now the nation’s top-rated syndicated news magazine.

A best-selling author, Norville’s latest book is The Power of Respect: Benefit From the Most Forgotten Element of Success (Oct. 2009, Thomas Nelson) provides a timely explanation of the measurable increases in productivity, creativity, and other benefits that result from respectful behavior. The book follows her New York Times Best Seller, Thank You Power: Making the SCIENCE of Gratitude Work For YOU (Oct. 2007, Thomas Nelson). Thank You Power brought together for the first time the growing body of academic research proving the benefits of gratitude.

In 2009, Norville capitalized on her lifelong love of fiber arts with The Deborah Norville Collection, a line of fine yarns for hand knitting and crocheting, found in major craft stores around the country. Her companion book, Knit With Deborah Norville features a variety of classic patterns using yarns from her collection. It is her work in television that’s made Deborah a household name. As anchor of Inside Edition, she has covered a wide variety of stories and events. She broadcast from Washington DC hours after the terror attacks of September 11th, was in Rome for the funeral of Pope John Paul II, anchored Inside Edition’s coverage of the funeral of President Ronald Reagan and the inauguration of President Barack Obama, and is regularly on the red carpet for Hollywood’s star-studded events including the Oscars and the Emmy Awards.

Norville made headlines for her week of groundbreaking reports – as an inmate — from a North Carolina penal institution known as the “toughest jail in America.” The story won Norville two national awards for reporting excellence. She snagged the first national interview with Bethany Hamilton, the young surfer who lost her arm in a shark attack in Hawaii. She was on the scene of the American Airlines jet crash in Cali, Colombia, and interviewed Paula Jones for the first wide-ranging talk about the lawsuit against then-President Bill Clinton. On a lighter note, she wrote and recorded a dance song and music video, with Inside Edition’s cameras documenting the process.

Norville’s reporting career began while still a student at the University of Georgia. As a reporter for WAGA-TV in Atlanta, she conducted a live interview with then-President Jimmy Carter. After graduating summa cum laude (4.0) First Honor Graduate from UGA, she was named weekend anchor at WAGA-TV. In 1982, she joined WMAQ-TV in Chicago as reporter and then later anchor. In 1987, she joined NBC News as anchor of NBC News at Sunrise. Ratings jumped 40% her first three months in that position. Norville was later named news anchor and then co-host of NBC’s Today program, a position she held until the birth of her first child in 1991. Norville resumed her broadcasting career with the “Deborah Norville Show,” heard on more than 200 ABC Radio Network stations. She joined CBS News in 1993 as a correspondent and later anchor for such programs as “Street Stories, “48 Hours,” and the “CBS Evening News.” She was also hosted of “Deborah Norville Tonight” on MSNBC.

Norville is active in a number of charities. She has been National Celebrity Spokesperson for the Mother’s March of Dimes, a director for Girl Scout Council of Greater New York, Broadcasters Foundation, the Women’s Committee of the Central Park and on the Steering Committee for the Rita Hayworth (Alzheimer’s) Gala. A sought-after lecturer, Norville speaks with candor and humor about dealing with life’s curves and juggling a career and motherhood. She is married and the mother of three.