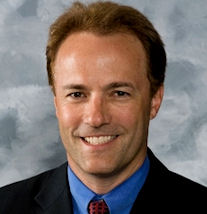 Author, columnist and television commentator, Andrew Busch has been connecting the dots between events and global financial markets for the last twenty-five years. As the Global Currency and Public Policy Strategist for BMO Capital and outside advisor to Congress and the US Treasury, Andrew Busch regularly crafts strategies for dealing with the volatile global markets. With a humorous and humble Midwest approach, Busch shows audiences how to interpret the seismic global and public policy shifts that are taking place for investors and corporations. His timely and energetic presentations show attendees how to live and thrive in the current economic chaos.

A CNBC contributor who is regularly quoted in the press around the world, his blog is number one on CNBC’s website. In addition to his daily newsletter The Busch Update, his columns in Forbes and his monthly columns for SFO (Stock, Futures, and Options) Magazine, Busch has written World Event Trading: How To Analyze and Profit From Today’s Headlines.

Andy has appeared for the last three years on CNBC’s The Closing Bell with Maria Bartiromo and is a CNBC contributor. Also, he appeared on FOX Business, Canadian BNN’s SqueezePlay, Bloomberg TV, and numerous CNN shows including Lou Dobbs Tonight. He is regularly quoted in the following press: Wall Street Journal, Reuters News Services, Dow Jones News Services, Associate Press, and the Globe and Mail.

Lucky 13: Can we turn the corner?
Will 2013 prove to be the year where the global economic recovery sustains itself or will it fall into recession? Andrew Busch, editor and publisher of the Busch Update financial and political newsletter, draws on his thirty years of market experience to provide the opportunities and problems that lie ahead this year. As seen weekly on CNBC’s Money in Motion, Busch breaks down the chaos into clear, easily understood analysis with his unique perspective and humor. “After getting run-over by the biggest and baddest financial market players in the world and surviving, I can not only tell you their license plate numbers, but also how to get the economic bugs out of your teeth.” Andrew Busch will help you understand the forces of central banks and public policy makers as they attempt to pump up global economic growth. Europe, China and the United States are covered and connected to show you how they impact your world.

Dis-function in DC: What to expect, watch and avoid
The fiscal cliff, the economic bungee and Taxmageddon are all new terms to the political and economic landscape for 2013. Now more than ever, the intersection of politics and markets is key to understanding how the world works and how it impacts your business. As an outside advisor on financial markets to Bush administration and the McCain campaign, Andrew Busch has for the last thirty years focused on how Washington has impacted the economy, the financial markets and the world. US Treasury Secretaries John Snow, Hank Paulson and Tim Geithner as have sought out Busch’s advice on jobs, taxes and fiscal issues. In 2012, Busch met and advised: Sen. Orrin Hatch, Rep. Dave Camp and Rep. and VP candidate Paul Ryan. As seen weekly on CNBC’s Money in Motion, Busch details the upcoming winners and losers from the current combative and dis-functional US government with humor and insight.

Top Ten Risks for 2013: Positive and negative opportunities
The 2008 financial crisis, the European debt crisis and China’s stock market collapse were all three tailed events that have become the norm and not the exception in today’s market. Low probability, high-risk events generate uncertainty and opportunity for those willing to keep their eyes and options open in 2013. With his thirty years of financial market experience, Andrew Busch will detail what he sees as the top ten risks for 2013 that can create a +/- 10% move in the markets. From an election in Germany to the outlook for the US housing recovery, Busch supplies his unique brand of analysis and ideas. As author and publisher of the Busch Update, Busch has investigated and written on top, market moving events including his book, World Event Trading: how to profit from today’s headlines. (Wiley, 2007) Since March of 2011, Busch has shared his views on CNBC’s Money in Motion show with keen analysis and humor that shows how the global markets are connected and how they impact your world.

Gold, Oil and Ag: The volatile mix of commodities and quantitative easing
The US Federal Reserve, the Bank of England and the Bank of Japan are all on quest to promote economic growth using the most dangerous monetary tool available: quantitative easing. What will this mean for the value of gold, energy and agriculture products in 2013? Editor and publisher of the Busch Update, Andrew Busch will share his thirty years of expertise in the financial markets and detail not only which central bank succeed or fail, but also how their actions impact the commodity markets. As he does on CNBC’s Money in Motion, Busch breaks down the global central bank actions for your audience to show how they generate big moves in the value of gold, energy and agriculture products. Busch has enlightened and entertained farmers, bankers and politicians on the pitfalls and pratfalls that happen when Bernanke, Carney and Shirakawa, print unlimited amounts of money.

Andrew B. Busch is the Editor-in-chief for the global market and public policy newsletter, “The Busch Update.” He is regular panelist on CNBC’s new show, “Money in Motion” that appears every Friday. His views can be found on www.andrewbusch.com as well as CNBC.com.

For 22 years, he was with BMO Capital Markets and has written the Busch Update for the last 13 years. He was named BMO’s Global Currency and Public Policy Strategist in 2007. Based in Chicago, he is a recognized expert on the world financial markets and how these markets are impacted by political events.

He provides clients with analysis on public policy issues for China, Europe and the United States. Public policy is of growing importance as the role of government has become more intertwined with the markets and the private sector.

On a regular basis, Andy consults with staff from the U.S. Department of the Treasury and Congress on economic, financial market and tax issues. In 2011, Andy was asked to testify in front of Congress on the effectiveness of the 2009 Stimulus package. From 2004 to 2008, he was an outside advisor to the US Treasury Department and White House on the economy and financial markets. Andy had a similar role for the 2008 McCain campaign. He has met and advised the last three US Secretary of the Treasury including John Snow, Hank Paulson and Tim Geithner.

In addition to his CNBC show, Andy is widely followed by clients and media for his daily commentaries and his frequent appearances on major financial news outlets, including: the WSJ, The Hill, Politico and USA Today. In 2007, he published his book entitled, “World Event Trading: How to profit from today’s headlines” by Wiley.