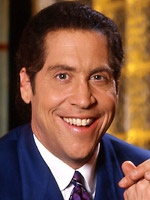 More than just one talent—and one personality—Roy Firestone’s presentations salute the best within us all. Critically acclaimed as a performer, monologist, humorist, musician and impressionist, Roy Firestone is one of the nation’s most sought after live corporate performers and keynote speakers. As host of ESPN’s Up Close and Up Close Prime Time, Firestone earned the label “best interviewer in the business” from no less than Sports Illustrated. But Firestone’s more than just a sports journalist, commentator and interviewer: he’s also a critically acclaimed comic impressionist, musician, singer and storyteller, enlightening and motivating audiences with stories from the lives of those he’s covered.

Audiences don’t just get Roy Firestone-they get Muhammad Ali, Neil Diamond, the Bee Gees, Johnny Mathis and a dozen other surprise guests in his comedic tour de force. Through song, multimedia presentation and compelling stories drawn from the lives of some of the most popular figures of our day, Firestone provides audiences with “motivetainment,” showing them how to achieve success and keep pushing forward to reach their own goals, while keeping them uplifted and entertained. Firestone is the author of three books: Up Close, Face to Face and Don’t Make Me Cry, Roy.

Roy Firestone . . . A One Man Show
Roy Firestone’s show is a highly energetic mixture of storytelling, music, humor, uncanny vocal impressions, hilarious and unforgettably moving video clips and heart rendering observations. The show is a celebration of life not just through the prism of sports but in his 20-year association of the greatest names in American public life. Whether it’s Firestone’s witty and satiric look at American sports or his touching story telling that evoke both laughter and tears, Firestone delivers a standing ovation winning One Man Show that is truly unprecedented in both keynote speaking and entertainment circles. Roy Firestone’s One-Man Show . . . Up Close Live is like the champions he interviews . . . a winner!

Critically acclaimed as a performer, monologist, humorist, musician and impressionist, Roy Firestone is one of the nation‟s most sought after live corporate performers, keynote speakers and lecturers.

His numerous television credits include Everybody Loves Raymond and Married with Children. Fans of The Simpsons remember him as the voice of „Bart Starr.‟ No stranger to talk shows, Firestone‟s appearances include Late Night with David Letterman, Later with Bob Costas, Larry King Live and The Tonight Show.

Firestone is a seven-time Emmy Award-winning and seven-time cable ACE Award-winning host, interviewer, narrator, writer and producer. As the ground-breaking, original host of ESPN‟s legendary Up Close, Up Close Classic and Up Close Primetime, Firestone has interviewed more than 5,000 athletes, musicians, actors and political figures, as well as scores of writers and filmmakers.

Not limited to television, Firestone is also prolific on the printed page—as the author of two best-selling books, Up Close with Roy Firestone, and most recently, Don‟t Make Me Cry,