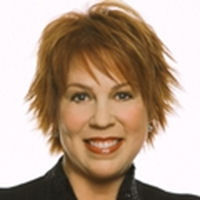 Emmy Award-winning comedienne Vicki Lawrence is one of the most beloved television personalities of her generation. Plucked out of total obscurity as a high school senior, Lawrence went on to become part of the now-legendary cast of The Carol Burnett Show. In the seventh season, at the ripe old age of 24, she created her most endearing character to date, Thelma Harper, or Mama as she is better known to her fans.

After the Burnett Show, Vicki went on to star in Mama’s Family, which consistently topped the ratings for its entire six-year run of original shows. Mama has attained almost a cult status among her legions of loyal television viewers, who still enjoy her in reruns twice daily throughout most of the country. Vicki Lawrence is a noted women’s rights activist and she was recognized for her efforts in 1988 when she was the first woman to be honored as “Person of the Year” by the Coalition of Labor Union Women.

Vicki is also the national spokesperson for The Cholesterol Low Down and as spokesperson for The American Heart Association Go Red for Women program, Lawrence uses her energy, enthusiasm and entertainment skills to help others. Aware that heart disease runs in her family, she recently learned that she has elevated cholesterol and has increased her commitment to increasing public awareness about cholesterol and the importance of heart health.

Being a Woman in a Man’s World
Lawrence travels all over the country speaking to womens’ organizations about her life and career, and the challenges and obstacles faced as a woman in what is seemingly still a “man’s world.” She’s brings to the stage her characteristic humor and wit, reminding us all that “Life is much too serious to be taken seriously!”

Multi-talented Vicki Lawrence has been a star since the day she was voted “Most Likely to Succeed” by her graduating class at Morningside High School in Inglewood, California. From 1965-1967, Lawrence sang with the Young American’s musical group and also appeared in the feature film, The Young Americans, which won an Academy Award for Best Documentary. Her show-biz career took off when, during her senior year in high school, she sent Carol Burnett a letter including a local newspaper article mentioning their resemblance. Lawrence invited Burnett to the local fire department’s “Miss Fireball Contest” where she was performing. Burnett, looking for an actress to play her kid sister on her new variety series, contacted Lawrence and made arrangements to come to the event. The rest is television history. The Carol Burnett Show premiered in 1967, and ran for 11 years, during which time Lawrence earned one Emmy Award and five Emmy nominations. After the show ended, Lawrence went on to star in her own series, Mama’s Family, with Ken Berry, Dorothy Lyman, Beverly Archer, and Allan Kayser.

Lawrence gained national recognition not only as an actress, but also as a game and talk show host, recording artist, theatre performer and writer. She became the first woman to host a game show with the daytime network version of Win, Lose, or Draw. 1992, her daytime talk show Vicki! was one of the most successful daytime talk shows to debut. She received critical acclaim as the only talk show host since Oprah Winfrey to be nominated for a Daytime Emmy in her freshman year. Her musical career peaked in 1973, when she received a gold record for her international hit single, “The Night the Lights Went Out in Georgia.” On stage, Lawrence has appeared in numerous productions, including Carousel, Special Occasions, Annie Get Your Gun, and Nunsense 3: The Jamboree, which aired on TNN. Most recently, she appeared in the The Vagina Monologues.

In addition to performing, Lawrence is an avid women’s rights activist, traveling across the country speaking to organizations about her life, career, women’s health and being a woman in a man’s world. She was recognized for her efforts in 1988 when she was the first woman to be honored as “Person of the Year” by the Coalition of Labor Union Women. She also serves on the Board of Trustees for Miller Children’s Hospital at Long Beach Memorial Center, a community, nonprofit children’s hospital. As the national spokesperson for The Cholesterol Low Down and spokesperson for The American Heart Association Go Red for Women program, Lawrence uses her energy, enthusiasm, and entertainment skills to help others. Aware that heart disease runs in her family, she recently learned that she has elevated cholesterol. She is working with her doctor to lower it through diet, exercise, and possibly medication, and is committed to increasing public awareness about cholesterol and the importance of heart health.

In 1995, she published her autobiography, Vicki!: The True Life Adventures of Miss Fireball.