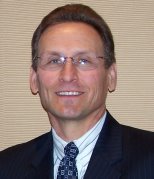 Michael Bergdahl, international business speaker, author and turnaround specialist is best known for his outstanding work with Wal-Mart, as the Director of “People” at the headquarters office, where he worked directly with Sam Walton. Michael Bergdahl is considered an authority on Wal-Mart and shares his experience with the company’s unparalleled success story. Part business, part inspiration, part storyteller, Michael Bergdahl is a Wal-Mart authority and acclaimed international speaker who has captivated audiences on six continents.

Prior to joining Wal-Mart’s executive team, he worked for PepsiCo’s Frito-Lay Division in the sales organization and headquarters staff assignments, and is widely respected as the turnaround specialist who played a key role in the successful business turnarounds at American Eagle Outfitters and Waste Management.

As a speaker, Michael Bergdahl is a professional, who employs business acumen, inspiration and storytelling to ignite renewed passion in his audiences. His customized speeches are designed to teach other organizations Wal-Mart’s Best Practices, and how to improve their ability to serve their customers, control their expenses and increase their sales.

He has appeared on CNN, CNBC, CNN FN, MSNBC, CNN International, CBS National Radio and Bloomberg TV, and participated in debates on “Power Lunch,” “On the Money,” “Morning Call” and “Closing Bell.” His articles have appeared in leading business publications, and he has spoken at association and business conferences domestically and internationally to retailers, non-retailers, manufacturers and suppliers who are interested in improving their ability to compete successfully in a Wal-Mart World!

HEATKTE (Pronounced Het Ka Tee): High Expectations Are The Key To Everything
Michael Bergdahl has just completed his new book, HEATKTE: High Expectations Are The Key To Everything. In this speech Bergdahl discusses how to overcome adversity, control your own destiny, and reach your full potential. Bergdahl has developed a 6 step process to help you, your peers, your friends and your family embrace high expectations and achieve your goals in business, school, and in life. Here are the 6 Keys to achieving success using the HEATKTE Personal Life Strategy:

This speech is based on Bergdahl’s own life experiences and those of his family. It is true story designed to help you avoid some of the mistakes he has made along the way, and to learn from his successes to help you to reach your goals in life. He weaves in the most important lessons he has learned about overcoming adversity and still achieving success in life. In this speech Bergdahl discusses how he faced personal tragedy in his own life when Sheryl, his wife of 35 years, suffered a paralyzing stroke. Bergdahl has more than 25 years of Human Resources experience working with a diverse group of people across six different industries. All of the observations and recommendations included in his book and this speech are based on his own real world experiences from life and work, and his interactions with various peoples, in his travels to cities on six continents around the world!

Picking Wal-Mart’s “POCKETS”: Strategies of the World’s Largest Company
Based on his first book, What I learned from Sam Walton: How to Compete & Thrive in a Wal-Mart World, this speech reveals “The Wal-Mart Way” through a discussion of the 7 key strategies of Wal-Mart. Using storytelling, humor, inspiration and his real world experience working with Sam Walton, Bergdahl unveils those seven strategies. He uses the acronym, “P.O.C.K.E.T.S.”, which stands for Price, Operations, Culture, Key Item Promotion, Expenses, Talent and Service. Bergdahl believes, “Finding your unique niche in the marketplace or “POCKETS” is the key to success no matter what market or business you are competing in!” In this speech he explains the key to each of Wal-Mart’s seven strategies, and the Best Practices, that have made Wal-Mart the World’s Largest Company. More importantly, Bergdahl will discuss specific strategies that audience members can take away from “The Wal-Mart Way” to make their businesses even more successful, providing techniques other companies have used successfully to compete, survive and thrive in a Wal-Mart World. He also reviews a checklist of success strategies and tactics audience members can implement in their businesses immediately upon return. Whether your conference participants love Wal-Mart, or hate Wal-Mart, if they are in business anywhere around the globe, they will benefit by “Picking Wal-Marts POCKETS!” Note: Bergdahl will tailor his remarks to support your brand and conference theme!

The 10 Rules of Sam Walton: Tactics of the World’s Richest Man
In Michael Bergdahl’s book, The 10 Rules of Sam Walton: Success Secrets for Remarkable Results, he unveils the tactics of the world’s most successful entrepreneur. In this speech, he discusses Sam Walton’s 10 self-professed rules for success, which Walton embraced as he grew Wal-Mart from a single store to a 7000+ store global enterprise. Did you know that when he died Sam Walton was the world’s richest man? He was worth US$100 billion which at the time was almost double the wealth of Bill Gates! Conference participants really want to learn the success secrets followed by the world’s wealthiest man and now they can! Based on his second book, The 10 Rules of Sam Walton, Michael Bergdahl will discuss “The Sam Walton Way” through a discussion of the tactics behind Sam Walton’s eponymous rules for entrepreneurial success. Sam Walton credited these 10 rules as the reason he became the World’s Richest Man.Your conference participants will gain actionable ideas from the tactics followed by Sam Walton, which they can adapt and utilize in their businesses and personal lives. In this speech, Bergdahl uses great stories only an insider can tell about Sam Walton’s unique brand of leadership!

Growing Your Business: The Sam Walton & Wal-Mart Way
When he died, Sam Walton was the wealthiest man in the world with an estate worth over US$100 billion dollars! How did he achieve such phenomenal success in just over 30 years? How does Wal-Mart focus its 2 million employees, 7100 stores and 120 massive distribution centers? What were Sam Walton’s secrets for growing Wal-Mart to become the world’s largest company? Wal-Mart’s successful growth is a result of specific strategies and tactics put in place long ago by the company’s founder, Sam Walton, who had a vision, a specific game plan, and rules upon which he focused his team to grow his business. In this speech Bergdahl discusses the success strategies and tactics of “The Sam Walton and Wal-Mart Way.” Audience members will learn the success secrets of the world’s most successful merchant and the best practices of the world’s largest company. The focus of this program is to help audience members transfer the knowledge gained into action to grow their own businesses, through innovation, risk taking, and thinking outside the box “The Sam Walton & Wal-Mart Way.”

Change/Challenge/Choice©
Competition with manufacturers from countries like China is brutal. The manufacturing world as you’ve known it has changed and you and your team must be willing to Change also, if you intend to survive. The Challenge for manufacturers of products is what to do to re-level the playing field. In order to succeed you and your team must make the Choice do what’s necessary to reinvent your business, and the way people think, to remain successful. The fact is that competition is more difficult than ever before. Those who are used to simply picking up the fruit of their labors right off the ground or from the branches within closest reach are finding that success today requires that people stretch and even climb up into the tree to gather the highest hanging fruit to succeed. Unfortunately, Change is always hard for people, which adds to the Challenge faced by organizations forced to make the Choice to reinvent their business in order to compete, survive and thrive in this complex and competitive world. In this speech, Change/Challenge/Choice, Bergdahl will discuss the following strategies:

This speech will be customized to fit your conference theme. 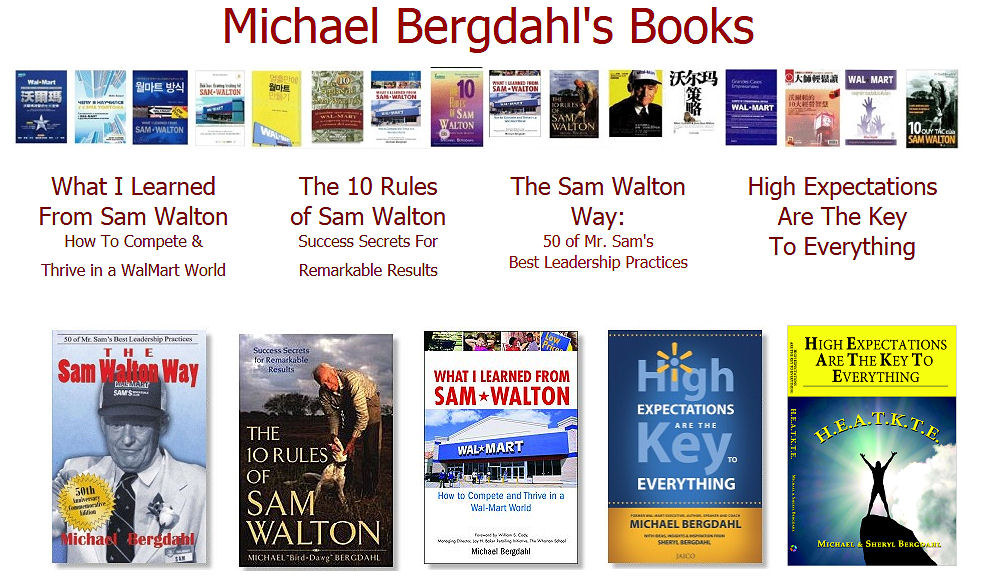 Michael Bergdahl is considered an authority on the best practices of Wal-Mart and Sam Walton. He has appeared on CNN, CNBC, CNN FN, MSNBC, CNN International, Univision, CBS National Radio and Bloomberg TV, and has participated in internationally televised news debates on “Power Lunch”, “On the Money”, “Morning Call”, and “Closing Bell”. Articles written by him and about him, and his books, have appeared in business newspapers and magazines around the world.

Chairman of the Board of Wal-Mart and son of Sam Walton, wrote the foreword). Both books were published and distributed internationally by John Wiley & Sons; translated versions are available in Russian, Thai, Indonesian, Korean, Simplified Chinese, Traditional Chinese, Vietnamese, and Spanish. His first book has also been published by John Wiley & Sons in English in India.

As a professional international business speaker, Bergdahl delivers his presentations with substance, using one part business, one part inspiration and one part storytelling skill. He customizes each speech or workshop to fit the conference theme, and he designs his messages to teach others the Best Practices of Wal-Mart. He presents keynotes, half day programs, and full day “Master Classes.” In his speech, “Growing Your Business the Sam Walton and Wal-Mart Way” (a.k.a. Picking Wal- Mart’s POCKETS), Bergdahl unveils the best practices of Wal-Mart, and the success secrets of Sam Walton. Audience members will learn the “Tactics of the World’s Richest Man”, Sam Walton”, and the “Strategies of Wal-Mart, the World’s Largest Retailer.”

He has spoken at events for Wal-Mart’s current suppliers, and its direct competitors, who are interested in improving their ability to compete successfully in a Wal-Mart World!