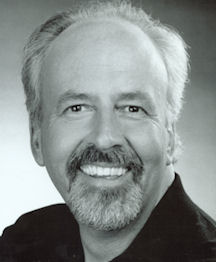 Mark Cordes has been hailed by many critics as a “One Man Laugh Factory.” This inventive comedian and humorist is a guaranteed winner! Whether it’s a very special event, roast, awards program or a final event, he will customize his performance to meet your needs…

Mark’s new program The Spouse Whisperer entertains the audience with very funny, acerbic observations on relationships and how to make them work…or not. He is always warm and congenial and has a great comedic rapport with his audience.

The show starts in high gear with a filmed introduction of a horse race, a metaphorical look at life, hilariously narrated by Cordes, followed by an immensely funny, satiric BBC documentary, illustrating the, ahem, “inferiority” of women and how to keep them in their “proper” place. It’s a great beginning and when Cordes makes his entrance the evening only gets better and better. Throughout the show, Cordes randomly fields pre-performance, written questions that the audience has submitted. His spontaneous responses are consistently priceless, sidesplitting observations.

Cordes informs us that 44% of marriages end in divorce and 56% end in death! Speaking of death and the confusion as to whether have an open or closed casket, Cordes muses, “I would have them put a foot peddle on it, like a wastebasket.”

Regarding his marriage, he claims that he is in revenue creation and his wife is in disbursement! His wife coaxed him to have a man-to man talk with his two stepsons. What was his learned advice? He told them, “Sons, don’t marry a woman with kids!” How can you resist?

At show’s end, Cordes gives out funny prizes to his audience. The greatest prize, of course, is having the opportunity to enjoy a complete show of convivial mirth with a great comedian. 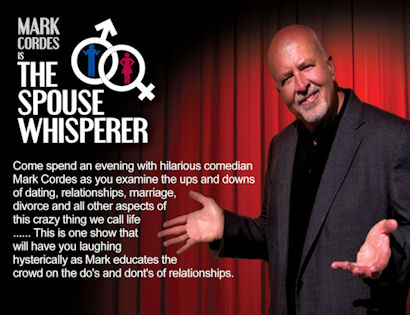 Mark Cordes is an inventive comedian and humorist. He has been hailed by critics as a “One Man Laugh Factory”. Whether it’s a very special event, roast, awards program or a final event, he will customize his performance to meet your needs. He is great for corporate comedy, humor, keynote speeches, a master of ceremonies, golf tournaments, charity events, workshops, new product rollouts, a hoax speaker, corporate game shows, team building exercises or to host a roast.

Mark was raised in Kansas City, Missouri and attended the University of Missouri. In 1983 he moved to the Valley of the Sun and began selling the “American Dream” …real estate for Coldwell Banker. A late comer to the world of comedy, Cordes was drawn into this funny world after his divorce. He states “I tried stand up one night on a dare, and I was hooked. I realized it was time to chase my dream. My personal life had bottomed out, so telling strangers about it was great therapy.”

From his humble start at an open mic, he steadily worked his way up the comedy ladder. From the opening act to feature act to headlining the top comedy clubs and corporate events from coast to coast, Cordes has enjoyed the ride.

“I realize every day how fortunate I am to do what I love. To be able to travel, meet interesting people, and make people laugh is a gift I enjoy sharing. And I know I’ll never run out of material. I just got married, and so…”

Cordes has performed at many venues throughout America. Whenever he gets a new client he works with them to ensure his comedic performance is on target with the goals of the meeting. With more than 17 years of comedic expertise, he Cordes is as responsive and responsible as he is funny. Whether you expect 50 guests or 500, you can rest in the knowledge that his goal is to plan and manage an event that enhances your company’s image.

In October 1998 the Minneapolis Star-Tribune wrote: “The definition of standup comedy! Cordes is a master jokesmith, sophisticated, clever and clean. Mark slips lightly through a maze of laugh lines, never missing a beat. With impeccable timing, comfortable charm and innovative, intelligent material, Mark establishes himself as a first-rate crowd pleaser and top-notch comedian.”