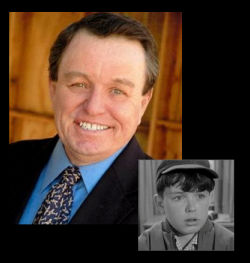 “You know, working isn’t as much fun as I thought it would be. I wonder why older people do it so much?” This is an example of the endearing words said by Jerry “The Beaver” Mathers, who was and remains an American institution. Mathers’ show business career began at the tender age of two when he was cast on the “Ed Wynn Television Show.” In 1954, he co-starred with Linda Darnell in “This Is My Love,” and caught the attention of Alfred Hitchcock who signed him for the 1955 film, “The Trouble With Harry,” starring John Forsythe, and Shirley McLaine in her first film role.

The budding young actor also appeared in two Bob Hope movies, “The Seven Little Foys” and “That Certain Feeling,” as well as two movies with Alan Ladd: “The Deep Six” and “Men of the Fighting Lady.” It was in 1957 however, with the debut of the series “Leave It To Beaver” that Jerry entered the hearts and homes of America. The show was an immediate success and ran for six seasons, totaling 234 episodes. Currently shown on TV Land and in countries throughout the world, “Leave It To Beaver” has made Jerry an American Icon. Jerry is a frequent speaker at national conventions and trade shows, talking about the state of the American family as compared to the mythical Cleavers of the 1950’s and the entertainment industry in general, with an emphasis on early television and the impact of media on popular culture.

Jerry Mathers is also available for meet and greet/autograph signings, question and answer sessions at conventions, hospitals, health fairs and other events, and as an event host or emcee.

The series Leave It To Beaver debuted in 1957 and continued to enchant television audiences through 1964. Actor Jerry Mathers, born on June 2, 1948, starred in the series, which ran for six seasons, totaling 234 episodes. Currently shown on TV Land and in countries throughout the world, Leave It To Beaver has made Jerry a icon of generations.

Named as one of the most well known individuals in television history by People Magazine in 1989, generations of Americans and people throughout the world are familiar with  Jerry Mathers. He has one of the highest “Q” ratings for name and face recognition in the United States.

Jerry’s show business career began at age two on the Ed Wynn Television Show. In 1954, he co-starred with Linda Darnell in This Is My Love. He caught the attention of Alfred Hitchcock who signed him for the 1955 film The Trouble With Harry, starring Shirley McLaine and John Forsythe. The budding young actor next appeared in two Bob Hope movies, The Seven Little Foxes and That Certain Feeling. Two movies with Alan Ladd followed: Deep Six and Men of the Fighting Lady.

When the Leave It To Beaver television series ended in 1964, Jerry Mathers finished high school and later graduated from the University of California, Berkeley, with a Bachelor of Arts degree in Philosophy. During this time, Jerry cut two records for A&M Records and traveled with his band “Beaver and The Trappers” for three summers. After college, Jerry began a successful career in banking and real estate development, using his savings from his acting career. A member of the 22nd Air Force National Guard, Jerry dispelled all rumors of dying in Vietnam.

Jerry Mathers eased back into the entertainment industry when he toured a number of cities for 18 months performing in So Long Stanley. This was followed by starring roles in three other plays. In 1982, Jerry was requested by Universal Television and his former cast members to return to his acting career as Beaver Cleaver in the made-for-TV movie Still the Beaver. The high ratings encouraged a pilot for the series The New Leave It To Beaver, which ran for 108 episodes.

At the end of the series, Jerry pursued his film and television career, making guest appearances in several movies and TV series. Jerry Mathers remains one of America’s most requested speakers at national conventions concerning the emotional state of the American family as compared to the mythical Cleavers of the 1950’s. He films commercials, works on behalf of charities, and is a worldwide media spokesman for Jenny Craig International. Jerry’s autobiography, …And Jerry Mathers as the Beaver, was published by Putnam in 1999 and chronicles his life. Today he lives in California’s Santa Clarita Valley and has three children.