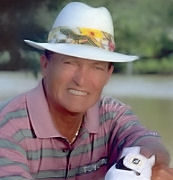 What separates Chi Chi Rodriguez from the rest is that he has coupled his success on the golf course with a strong personal desire to make a positive impact through his Chi-Chi Rodriguez Youth Foundation. Chi Chi’s foundation is home to troubled and abused youngsters, and its mission is simple: to give kids a chance. “I figure kids are the future. If I made it, anybody can do it. I think I can be a good role model for them because they can look at me and say, ‘Look, he’s a small guy, very poor, and he worked hard and made it.’ If I can help one kid become successful, that’s all I ask for.” Chi Chi Rodriguez’s philanthropic activities on behalf of indigent children through his youth foundation have shown that he is not only a champion in golf, but a champion in life. Legendary on the course for his famous sword dance when he holes a putt, Rodriguez has demonstrated time and again that he’s a great golf champion, and an even greater champion to underprivileged youths and the Hispanic community.

Juan Chi Chi Rodriguez is one of the great showmen in sports history. In a career which spans four decades, Chi Chi Rodriguez won 22 Senior PGA Tour victories, 8 regular PGA Tours and has career earnings of over $7 million dollars.

Chi Chi Rodriguez was born in Rio Piedras in 1935, and as a young boy helped his father work the hot, dusty sugar cane fields. He began caddying at the age of six and actually learned how to play golf with clubs fashioned out of guava tree limbs and tin cans hammered into balls.

Chi Chi’s golf expertise began at the age of 12, when he shot a 67. Chi Chi Rodriguez became known for his eye hand coordination and imagination skills that more than 40 years have help him overcome all kinds of obstacles.

It has been said that pound for pound, Chi Chi Rodriguez is the longest hitter in the history of golf. At 5’7″ and weighing 132 pounds, the wiry Puerto Rican has at times driven a golf ball over 350 yards. He has consistently been at over 250 yards throughout his career.

Chi Chi’s talent extends beyond what he does on the golf course, as he has a strong desire to make a positive impact on today’s youth. He has founded the Chi Chi Rodriguez Youth Foundation in Clearwater, Florida, which is a home to troubled and abused youngsters.

Chi Chi’s incredible career includes winning PGA tournaments four times in each of the 1990-91 seasons and was the only winner of back to back events in 1991. He became the first player on the Senior Tour to win the same event three consecutive years, set a senior tour record with eight consecutive birdies en route to a win at the 1987 Silver Pages

Classic, represented Puerto Rico on 12 World Cup Teams, won the Hispanic Achievement Recognition Award (’86) and Replica’s Hispanic Man of the Year (’88), and was inducted into PGA’s World Golf Hall of Fame in 1992.

Despite a strong, successful career, Rodriguez‘s health started failing him and it showed in his game. He fiddled with equipment, worked on his game, tried to find out what was wrong, but couldn’t figure it out. He was feeling weak, had severe stomachaches, and a pain persisted in his jaw, but Chi Chi Rodriguez never saw a doctor. He didn’t believe much in medicine, so he left it unattended.

In October 1998, Chi Chi Rodriguez had a heart attack just before he was to play in a Senior PGA Tour event in California. Fortunately, with the help of doctors and modern-day medicine, Rodriguez has recovered and we will continue seeing him on the golf course doing his famous sword dance when he holes a putt.