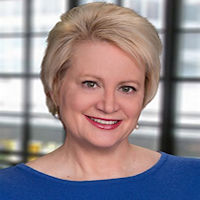 Susan Dentzer is one of the nation’s most respected health and health policy thought leaders.  She is a frequent speaker and commentator on television and radio, including PBS and NPR, and an author of commentaries and analyses in print publications such as Modern Healthcare, the Annals of Internal Medicine,  the New England Journal of Medicine and NEJM Catalyst. She is also the editor and lead author of the book Health Care Without Walls: A Roadmap for Reinventing U.S. Health Care.

Additionally, Ms. Dentzer is Senior Policy Adviser at the Robert Wood Johnson Foundation, the nation’s largest philanthropy focused on health and health care, and an on-air analyst on health issues with the PBS NewsHour. She served from 2008-2013 as the editor-in-chief of Health Affairs, the nation’s leading journal of health policy. Ms. Dentzer also previously led the NewsHour’s health unit, reporting extensively on-air about health care reform debates. She currently serves as a member of the Board of Overseers of Dartmouth Medical School and is an Overseer of the International Rescue Committee, a leading humanitarian organization.

Ms. Dentzer graduated from Dartmouth, is a trustee emerita of the college, and chaired the Dartmouth Board of Trustees from 2001 to 2004. She is an elected member of the Institute of Medicine and the Council on Foreign Relations; a fellow of the National Academy of Social Insurance; a fellow of the Hastings Center; and a member of Kaiser Commission on Medicaid and the Uninsured. Ms. Dentzer is also on the board of directors of Research America, an alliance working to make research to improve health a higher priority, and is a public member of the Board of Directors of the American Board of Medical Specialties.

Foreign Relations, and a fellow of both the National Academy of Social Insurance, a nonprofit, nonpartisan organization made up of the nation’s leading experts on social insurance, and the Hastings Center, an institution dedicated to bioethics and the public interest. She is also a public trustee of the American Board of Medical Specialties, the not-for-profit organization that oversees 24 approved medical specialty boards in setting standards for board certification and maintenance of certification for the nation’s physicians, and a member of the board of directors of Research America, which advocates for increased US investment in biomedical research.

Dentzer is a frequent guest and commentator on such National Public Radio shows as This American Life and The Diane Rehm Show. From May 2008 to April 2013,Dentzer was the Editor-in-Chief of Health Affairs, the nation’s leading journal of health policy, where she transformed the journal from a bimonthly academic publication to a topical monthly journal and on-line publication with more than in excess of 120 million page views annually.

Prior to joining the journal, Dentzer was on-air correspondent on health and health policy for the PBS NewsHour with Jim Lehrer, where she earned numerous awards for her work. (The unit was supported by a grant from the Robert Wood Johnson Foundation. ) Before joining the NewsHour, Dentzer served as chief economics correspondent and economics columnist for US News & World Report and a senior writer for Newsweek.

Dentzer has been the recipient of several fellowships, including the Nieman Fellowship for journalists at Harvard University and the US-Japan Leadership Program fellowship sponsored by the Japan Society of New York.

Dentzer is also a member of the Board of Overseers of the International Rescue Committee, a humanitarian organization providing relief to refugees and displaced persons around the world. She chairs the IRC board’s Program Committee, which oversees the organization’s activities in resettling refugees in the United States and in dealing with refugees and displaced persons in roughly 25 countries. Dentzer has served on IRC commissions examining the problems of domestic violence against women in West Africa and, in 2007, the situation of Iraqi refugees in Syria and Jordan.

A graduate of Dartmouth and holder of an honorary master of arts from the institution, Ms. Dentzer is a Dartmouth trustee emerita, and was the only woman to date to chair the Dartmouth Board of Trustees, which she did from 2001 to 2004. Winner of the Dartmouth Alumni Award, the Young Alumni Award and the Dartmouth Presidential Medal for Achievement, she has served on the Board of Overseers of Dartmouth Medical School since 1993.