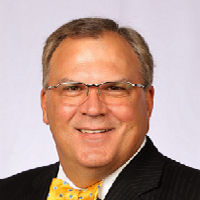 ROGER RICKARD is the guy organizations call when they need help with advocacy. The founder of Voices in Advocacy, he is a proven leader in empowering people to make a difference. He is a highly acclaimed speaker and author of 7 Actions of Highly Effective Advocates.

Leading authority on advocacy uses strategic tools to engage and activate the champions of your association or non-profit cause. Roger Rickard’s education, experience and enthusiasm enlighten audiences on key issues and relationships that turn passion into action.

Roger has been an advocate for citizen involvement since the age of 13. He was elected to public office as a young man, later served as a legislative staffer for the Pennsylvania State Legislature, and has worked on many local, regional and state campaigns as well as numerous Presidential campaigns.

Roger majored in Political Science at Pennsylvania State University and is still a proud Nittany Lion.
His education, experience and enthusiasm enlighten audiences on key issues and relationships that turn passion into action. 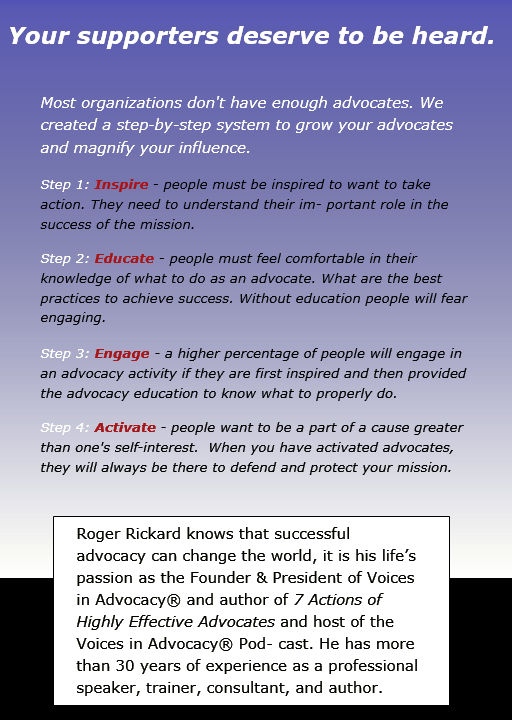 Key Questions to Ask about Effective Advocacy
by Roger Rickard

1.  Are your supporters informed on the issues of your organization?

2.  Have you identified your strategic partners and alliances?

3.  Are you engaging and activating your advocates?

4.  Do you have a sustainable and inspired advocate base?

5.  Can you identify your key advocacy talking points?

6. When was the last time your advocates engaged with the elected?

7. Where are your opportunities to expand your sphere of influence?

8. Why do you need an advocacy toolkit for your supporters?

9. When do you speak out for your issue or cause?

10. How can you convert believers into champion effective, influential advocates?

Roger is the Founder & President of Voices in Advocacy® and author of 7 Actions of Highly Effective Advocates. He has more than 30 years of experience as an advocacy professional, speaker, trainer, consultant, and author. As a recognized expert in advocacy engagement and grassroots activation, Roger works with a wide cross-section of organizations from diverse industries. His vibrant personality and a good sense of humor make for engaging and interactive programming that is packaged and delivered in an easy to understand, easy to apply format combining his education, experience, and enthusiasm to drive advocacy success.

Roger is a proud Penn State Nittany Lion and self-confessed political junky having received his education in Political Science. He has been an advocate for citizen involvement since the age of 13. Elected, three times to public office as a young man, served as a state legislative staff member, and have worked on many political campaigns from his very own clear up to presidential campaigns.

His work spans a cross-section of local, regional, national, and international organizations. He has served in numerous industry associations’ leadership roles, is a recipient of several international industry awards, and is a member of Meeting Professional International’s prestigious “Community of Honoree’s”.

Roger is a BIG man at 6’8”, a BIG thinker, and he has BIG ideas for helping you succeed with advocacy. He is casually known as the BIG GUY with a BOW TIE.

ELEPHANTS DON’T BITE – DONKEYS DON’T KICK
Fear of feeling misunderstood or unwise is one of the main reasons people do not engage with their elected officials. This session dispels this fear and empowers one to become an engaged non-partisan advocate.

SEVEN ACTIONS OF HIGHLY EFFECTIVE AD-VOCATES
How do we create the influence needed to support long term viability? Inspire, educate, engage, and activate your supporters by turning them into effective, influential advocates.

THE SEVEN BRANCHES OF THE ADVOCACY TREE
Advocacy is more than government affairs. Knowledge of the branches of the advocacy tree, who uses them and how you can too.

THE POWER OF YOUR VOICE
How do you create the influence and impact needed to empower you to be an advocate for yourself?
Learn what it means to be a self-advocate and depart knowing you have a powerful voice to defend and protect your self interests.

RIPPED FROM THE HEADLINES
Every day we hear about fake news. This session will be anything but fake. The reason: YOU drive the content. During this highly interactive program you will examine, deliberate, and discuss your issues in different silos, i.e. transportation, technology, safety and security, cyber-security, taxes, infrastructure, diversity/inclusion, education, etc.

PACman — THIS GAME IS NOT FOR KIDS.. WE THE PEOPLE.. THE CITIZEN ADVOCATE
A little over 40 years ago, the video game PAC-MAN was all the rage. PAC-MAN requires speed, agility, and a plan of attack. Like any game – you need to know the rules to succeed. For a political action committee, money drives impact. Money is the food and fuel for which PACs run on.