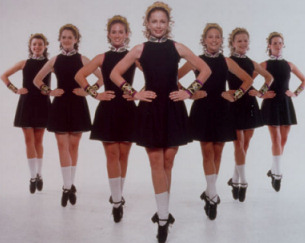 The World Champion Trinity Irish Dance Company will quickly dispel any notions you may have about Irish dance. Artistic Director Mark Howard founded the company in 1990, as a means to providing professional career opportunities to students who had no outlet for Irish dancing beyond the competitive circuit. This innovative nonprofit company is constantly searching for original means of expression, while maintaining a high regard for old traditions.

As a unique, Irish-American company, Trinity was the birthplace of progressive Irish dance. Its liberality has opened new avenues of artistic expression that have led to commercial productions such as Riverdance.

Considered an “American Treasure” by critics and enthusiasts worldwide, this company of 18-25 year olds has received great critical and popular acclaim from audiences throughout the world. The company has danced on such stages as New York’s Joyce and New Victory theaters and Washington’s Kennedy Center. Each show shares the same passion, flair and precision that have made many Trinity dancers world champions of Irish dance. Founding company members were trained at the prestigious Trinity Academy of Irish Dance (Chicago/Milwaukee). Together, dancers from this school have won an unprecedented eighteen world titles for the United States at the annual World Irish Dance Championships in Ireland. Over the past decade, the company has collaborated with many notable contemporary choreographers and musicians, developing more diverse movements and new genres of dance. The company’s unique form of story ballet conveys the American experience of ancient and modern Ireland.

Trinity’s dancers have toured internationally and have been invited guests for such dignitaries as the Royal Family of Monaco, Ireland’s President Mary Robinson, and Indian meditation master Gurumayi Chidvilasananda. Trinity holds a unique place in the dance world, offering both a highly skilled presentation of progressive Irish step dance and a brilliantly engaging interpretation of contemporary world vision.

Specifics may change depending on which program is selected.

“Elevating children and the world through the power and grace of Irish Dance.”

By using Irish dance as both an instrument and metaphor, Mark Howard has been crossing dance and cultural boundaries in important ways. Over the past ten years, this Emmy Award-winning choreographer has synthesized forms and transcended craft into art, creating something that is forward-looking and new. His work maintains integrity, while it simultaneously goes beyond the framework of ethnicity to carve new traditions.

Born in Yorkshire, England and raised in Chicago, Howard began his dancing career at age nine at Chicago’s Dennehy School of Irish Dance. Becoming a North American champion Irish dancer himself, he launched the Trinity Academy of Irish Dance at age 17. Experiencing great success, the school won an unprecedented 22 World Championship titles for the United States – the first when Howard was only 25. Twenty-one years since its inception, the Trinity Academy has grown from a dozen students practicing in a church basement to the largest Irish dance program in the world. Intent on preserving the legacy of Irish dance and providing a creative outlet and professional livelihood for dancers, Howard formed the Trinity Irish Dance Company at age 29. Before that time, there were no Irish step dancers performing collectively outside the competitive realm. In the late 1990s, he began a second company called Trinity II.

Howard continues to choreograph new works for the company, as well as expand his independent career working in theater, television, concert and film. In 1994 and in 2001, he was named on of Irish American Magazine’s Top 100 Irish-Americans for his innovative work in Irish dance. In 1991, his PBS production of Green Fire and Ice aired nationally; and in 2002, PBS began airing One Step Beyond. His early work found a common rhythm and movement between African and Celtic dance, which was an integral part of the 1993 Emmy Award-winning PBS special, World Stage. In 1995, his choreography was presented in the ABC special About Us: The Dignity of Children, hosted by Oprah Winfrey.

Howard has done extensive film work for Disney, Touchstone, Universal and DreamWorks, working with such directors as Ron Howard (Backdraft) and Sam Mendes (American Beauty). He recently choreographed scenes for Road to Perdition starting Tom Hanks and Paul Newman. During this time, Howard became a personal dance coach for Tom Hanks. Howard also trained such celebrities as Lara Flynn Boyle (The Practice) and Kate Hudson (Almost Famous). Howard was a regular guest on The Tonight Show with Johnny Carson from 1988 to 1990, and his national television credits include Late Night with Conan O’Brien, Live with Regis, Good Morning America and CBS This Morning.

Howard’s choreography has also been featured on the stages of Chicago’s prestigious Goodman and Steppenwolf theaters. He has also been awarded numerous Choreographer Fellowships by the National Endowment for the Arts. His undying energy and unique vision have significantly changed the direction and scope of Irish dance, reintroducing the form as the phenomenon it is today.