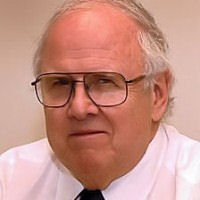 An award-winning journalist who has covered the White House since 1970 and reported on the activities of Presidents Nixon, Ford, Carter, Reagan, Bush, Clinton, Bush and Obama, Tom DeFrank is the co-author of Bare Knuckles and Back Rooms, the memoir of political consultant Ed Rollins and The Politics of Diplomacy, the memoirs of former Secretary of State James A. Baker, III. DeFrank’s latest book, The New York Times best-seller Write it When I’m Gone, is based on his 16 years of private interviews with President Ford.

DeFrank provides a glimpse of the executive office very few get to see, with a highly anecdotal and conversational look at presidential personalities. DeFrank reveals the human (and humorous) side of the office, as well as an assessment of Congress, the 2010 midterm elections and current Washington politics. In a presentation punctuated with amusing anecdotes, Tom DeFrank provides a penetrating look at current events and the Washington political scene. 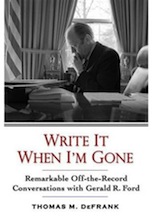 His reporting has been praised as “riveting.” ABC News calls him “excellent, well- connected and influential” and “legendary.” The American Journalism Review has rated him “one of the unsung stars of Washington journalism.” The New York Times ranked him as one of the country’s best political ghostwriters. And President Gerald R. Ford called him “one of the finest journalists I have ever known. Everyone I know feels the same way: you are fair, trustworthy and professional.”

One of Washington’s most respected President-watchers, Tom DeFrank is a veteran political journalist and author. As Washington bureau chief of The New York Daily News since 1996, he directs coverage of the nation’s capital for the country’s fourth- largest metropolitan daily newspaper.

In 2007, he was honored by the White House Correspondents’ Association for “his exclusive reporting as well as his ability to pack lively analysis into compact spaces.”

His book on 30 years of private conversations with President Ford, Write it When I’m Gone, published in November 2007, was a New York Times and Washington Post bestseller.

In 2006, DeFrank won the Gerald R. Ford Prize for distinguished reporting on the Presidency. In announcing the award, the judges noted: “His coverage of the White House demonstrated a particularly keen perception of relationships among principals and how these relationships influenced official policy. His articles were consistently accurate, balanced in judgment, and usually ahead of his competitors. ”

The 2008 Presidential campaign was the eleventh he has covered in 40 years as a Washington reporter. He has covered the resignation of one President, the impeachment of a second and was an eyewitness to two assassination attempts against a third.

DeFrank was Newsweek’s senior White House correspondent for a quarter century and also served as deputy chief of the magazine’s Washington bureau for twelve years. Assigned to the White House beat since 1970, DeFrank has covered eight Presidents: Nixon, Ford, Carter, Reagan, Bush, Clinton, Bush and Obama. He has had 22 interviews with President George W. Bush, whom he has covered since 1987.