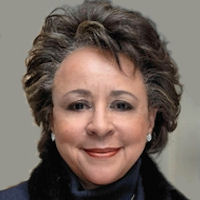 Sheila C. Johnson is a successful entrepreneur and philanthropist whose accomplishments span the arenas of hospitality, sports, fashion design, TV/film, the arts, education, women’s empowerment, and community development. She is CEO of Salamander Hospitality, LLC, overseeing a growing portfolio of luxury properties and lifestyle businesses. As president and managing partner Johnson is also the only African-American female to enjoy ownership and have a stake in three professional sports teams: WNBA’s Washington Mystics, NBA’s Washington Wizards and the NHL’s Washington Capitals.

Johnson is also a TV pioneer, having been a founding partner of BET (Black Entertainment Television). A dedicated activist, she serves as a global ambassador for CARE, a leading humanitarian organization fighting poverty worldwide by empowering women since they are in a pivotal position to help their communities escape poverty. She shares with audiences her insights on entrepreneurship, collaboration and philanthropy.

Lessons from a Groundbreaking Leader
The entrepreneurial bug bit Johnson early on. Never one to take the easy road, she has been on a path to success that has been filled with hard lessons—including the absolute importance of collaboration. In today’s challenging business environment, entrepreneurs need encouragement more than ever before, and Johnson not only offers them inspiration, but also imparts the important lessons she’s learned, including:

The Rewards of Philanthropy
Leaders must be givers, sharing their time, resources and vision to help others who are less fortunate, and inspiring those around them to action. In addition to Johnson’s contributions to the arts, she is a global ambassador for CARE, a leading humanitarian organization fighting global poverty by empowering women, because they have the unique power to help entire communities escape poverty. “Sheila’s I Am Powerful Challenge” raised millions for CARE, and “A Powerful Noise,” the documentary Johnson produced about three remarkable women effecting change in Mali, Vietnam and Bosnia, helped raise awareness of women’s issues around the world. Through inspirational stories and moving anecdotes, Johnson illustrates:

Creative Pursuits
Johnson spent her grade school and college years training to be a concert violinist. She is now an advocate for the arts and arts education, as she believes that they allow children an important outlet for their creativity and help with all other academic pursuits. She serves as chair of the Board of Governors of Parsons The New School for Design in New York and sits on the boards of VH1’s Save the Music Foundation and Americans for the Arts. Johnson speaks authoritatively on the rewards and benefits of investing in the arts.

Sheila C. Johnson is a successful entrepreneur and impassioned philanthropist.

As Vice Chairman of Monumental Sports & Entertainment, Ms. Johnson is President and Managing Partner of the WNBA’s Washington Mystics and the only African-American woman to have ownership in three professional sports teams, including the NBA’s Washington Wizards and the NHL’s Washington Capitals.

Ms. Johnson is a partner in ProJet Aviation, a comprehensive aviation service company specializing in aviation consulting, aircraft acquisitions, management, and charter services based in Leesburg, VA. She is also a partner in Mistral, the makers of fine bath, body and home products.

In May 2011, Ms. Johnson joined the AOL Huffington Post Media Group as Strategic Advisor for Multicultural and African-American Initiatives.

In 2006, Ms. Johnson was named global ambassador for CARE, a leading humanitarian organization that combats global poverty by empowering women. “Sheila’s I Am Powerful Challenge” was instrumental in helping raise $8 million in less than one year for CARE’s important work. Since 2011, she has served as a member of Accordia Global Health Foundation’s International Council, helping rally support for the foundation’s efforts to overcome the burden of infectious diseases by building healthcare capacity and strengthening academic medical institutions in Africa. Ms. Johnson is also a member of the Council on Foreign Relations.

A fervent supporter of the arts and education, Ms. Johnson was appointed by President Obama to the President’s Committee on the Arts and the Humanities. She also serves as Chair of the Board of Governors of Parsons The New School for Design in New York, as well as on the boards of the Sundance Institute Board of Trustees, the Tiger Woods Foundation, the Jackie Robinson Foundation, ANNIKA Foundation, and the University of Illinois Foundation.

An accomplished violinist, Ms. Johnson received a Bachelor of Arts in music from the University of Illinois, as well as honorary degrees from numerous other institutions. Ms. Johnson lives in Middleburg, VA, is married to the Honorable William T. Newman, Jr. and has two children.