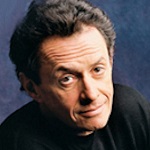 “Selling more stuff, to more people, for more money” defines marketing success for Sergio Zyman, the man who put the fizz back in Coca-Cola’s fortunes. World renowned as chief marketing officer for The Coca-Cola Company, Zyman returned the corporation to market-giant status and was named one of the three great pitchmen of the 20th Century by TIME magazine. A candid, charismatic contrarian, Sergio Zyman offers audiences practical proof—and matching strategies—that marketing goals must drive corporate action.

Zyman believes that a disciplined approach to marketing yields success, and that companies who guess at their marketing strategies do so at their own peril. A master of unconventional wisdom, Zyman literally wrote the books that define today’s market strategies: The End of Marketing As We Know It and The End of Advertising As We Know It. His latest, Renovate Before You Innovate, explains the tools managers need to revitalize their marketing strategies and sustain their growth rates. This book challenges conventional business wisdom and helps companies make smarter decisions.

Accelerate Profitable Growth By Renovating Before You Innovate
Many companies rely too heavily on innovation to solve their problems. When a brand gets old or tired, the impulse is to scrap it and start over with something fresh. But more often than not, innovation simply doesn’t work. Sergio knows this firsthand – he was the chief marketing officer at The Coca-Cola Company during the disastrous launch of New Coke. So what’s the alternative? Sergio preaches the power of renovation – recapturing the essence of your existing brands, products, and core competencies and doing more of the things that made you great in the first place. Too many managers are so obsessed with innovation that they launch products that no one will buy. Pre-moistened toilet paper or smokeless cigarettes, anyone? Sergio delivers the solutions managers need to revitalize their strategies to improve growth, and he challenges conventional business wisdom to help companies make smarter, profitable decisions.

Embrace the New Future of Marketing to Drive Increased Profits
Marketing is serious business. It’s about increasing sales and profits, through rigorous deployment of strategies to grow your business. So it’s time to replace the “art” of marketing (you know – using instinct and gut feel to communicate to your customers) with a scientific, data-based approach to driving sales. Sergio will help audiences understand how, by transforming marketing efforts from the product of guesswork to outcome of a disciplined process, their businesses can “sell more stuff, to more people, more often, for more money, more efficiently.” Sergio offers his unique observations about who gets it, who doesn’t and what it all means for your business. 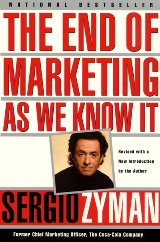 “Selling more stuff to more people more often for more money more efficiently ™” defines marketing success for Sergio Zyman, the man who put the fizz back in Coca-Cola’s fortunes, founded a preeminent marketing strategy firm, and authored four books, including two international best-sellers. Oh, and he was names one of the top three marketing pitchmen of the 20th century by TIME magazine. Not too bad for a guy who started out south of the border.

Zyman  was  born  in  Mexico  City  and  began  his career with management positions in Japan, Brazil, Guatemala and New York before moving to Atlanta to begin his first of two tenures with The Coca-Cola Company. His first residence was highlighted by a series of launches of revolutionary products such as Diet Coke, Cherry Coke and New Coke (yes, a product not well received by consumers at the time, but one that many believe simply was an idea far ahead of its time – a theory well supported by the numerous cola flavors and formulas that are popular today). Zyman departed The Coca-Cola Company in 1988 and formed Core Strategy Group, a consulting firm with a client roster that included 7-11, Miller Brewing Company and several other large companies. He was influential in the positioning and development of the strategy that resulted in the election of former Mexican President Vincente Fox.

Roberto Goizueta, former Chairman of Coca-Cola and a true believer in Zyman’s forward thinking, persuaded him to return to Coke in 1993 to hold the first chief marketing officer position ever created in any company. Zyman re-conceptualized the company’s marketing strategy and boosted worldwide annual sales from nine to 15 billion cases – the most explosive growth in the company’s history. Upon Mr. Goizueta’s death, Zyman departed The Coca-Cola Company and wrote a series of books, including the international best-seller The End Of Marketing As We Know It.

In 1999, Zyman founded Zyman Group, an international marketing consulting firm. As the driving force behind Zyman Group, he was sought after by food and beverage companies, industrial manufacturers, popular ratialers, and global communication powers around the world. This success led Inc. magazine to name Zyman Group one of the fastest growing consulting firms in the United States. In 2005, he sold majority ownership of Zyman Group to MDC Partners.

Zyman has been hailed as one of the most dynamic and charismatic speakers in the world. He energizes audiences with his entertaining and bold, unpredictable style. He speaks on non- traditional growth strategies, the role of marketing in corporations, the similarities between the political process and the marketing process, and all current and social events and the impact on consumer behavior.

Zyman holds an Executive MBA from Harvard University and attended graduate schools in London, Paris and Jerusalem. He was named Man of the Year in 1998 by the UJA. In 2208, he  was bestowed a Lifetime Achievement Award by the Asociacion Nacional de la Publicidad. He is an avid skier, golfer and runner. He is currently involved in major strategy projects, as well as politics and is currently writing his fifth book.