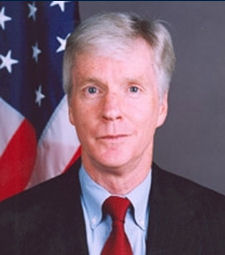 Ryan Crocker’s singular experience in the turbulent politics of the Middle East encompasses a Foreign Service career of 37 years, including six assignments as Chief of Mission in the region’s most challenging capitals of Beirut, Kuwait, Damascus, Kabul, Islamabad and Baghdad. He has spent five years since 9/11 in Iraq, Pakistan and Afghanistan, leading U.S. diplomatic efforts in all three countries during a critical period in America’s relationship with this volatile region. Crocker served as U.S. ambassador to Iraq from 2007 to 2009, during the diplomatically sensitive period that began with U.S. President George W. Bush’s “surge” and ended with Iraq’s January 2009 provincial elections. Working closely with Gen. David Petraeus, Crocker played a major role in the improvement of Iraq’s security conditions, leading to the Iraqi Army’s successful assault on Moqtada al-Sadr’s Mahdi Army in the southern city of Basra. Fluent in Arabic, he was the senior negotiator in the successful effort to cement two historic agreements in 2008 between the United States and Iraq that constitutes the road map for the phased withdrawal of US forces. Crocker has been described by President George W. Bush as “one of the finest Foreign Service officers in American history” and by President Barack Obama “as an example of the very best that this nation has to offer.” Ryan Crocker offers a unique, first-hand perspective on the complex issues that challenge the United States in the Middle East and their prospects for the future.

Lessons from a Long War: Crisis Leadership
In May 2009, Secretary of State Hillary Clinton announced the establishment of the Ryan C. Crocker Award for Outstanding Leadership in Expeditionary Diplomacy “named for a true hero of the Foreign Service, a man who has led diplomatic missions in some of the hottest hot spots on the planet.” From the bombing of the American Embassy in Beirut in 1983, through the opening of embassies in Lebanon in 1990 and Afghanistan in 2002, mob attacks in Damascus in 1999/2000 and the diplomatic effort in Iraq over the last two years, Crocker knows what it takes to lead under conditions of extreme danger and hardship. From Kuwait to Afghanistan to Pakistan to Iraq, he has forged new templates for civil-military cooperation in crisis situations. Over many years in very tough places, he has learned what it takes to succeed, organizationally and individually, when the chips are down.

The U.S. and the Middle East
Drawing on three and a half decades of involvement in Middle Eastern affairs, Ryan Crocker lays out the special characteristics of this complex region, drawing on history, culture and politics to provide a framework for understanding current developments. A participant in the events that have shaped the region and affected America’s most vital interests since the start of the Iran-Iraq war in 1980 and the Israeli invasion of Lebanon in 1982, Crocker describes both causes and consequences of US decisions at critical moments. He analyzes the interplay of forces throughout the region and offers informed insights into the future development of events as well as the options and challenges they present to the United States. Called “America’s Lawrence of Arabia” by President Bush, he is uniquely equipped to do so.

Iraq
Crocker spent two years in Iraq at the time when Saddam formally assumed power, was the US representative on a UN inspection mission to Iraq in 1998, undertook several missions to Iraqi Kurdistan in 2001 and 2002 and worked to establish Iraq’s first governing body after the fall of Saddam in 2003 in addition to his service as Ambassador to Iraq 2007-2009. This extensive experience enables him to describe how Iraq’s political culture and history condition current events, how Iraq relates to its neighbors, the international community and the United States and what we can expect in the future. As Ambassador, he was at the center of the decisions and events that have led to the current encouraging environment in Iraq, while his in depth understanding of Iraq’s complicated past and present allow him to identify the many challenges that lie ahead for both Iraq and the US.

Pakistan, Afghanistan and the War on Terror
Ryan Crocker opened the American Embassy in Kabul after the fall of the Taliban and was subsequently honored for his “exceptional courage and leadership in Afghanistan”. He later served as Ambassador to Pakistan from 2004 to 2007. As American attention shifts to the challenges posed by a resurgent Taliban and its allies in both Afghanistan and Pakistan, Crocker is able to describe and assess events on the ground, long term trends and policy options for the US and its allies. His rare combination of experience in the Middle East as well as Pakistan/Afghanistan give him an exceptional perspective on similarities and differences between the Arab world and South Asia- and on some of America’s enemies who straddle both.