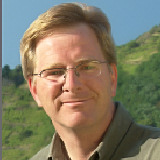 Travel is freedom… one of the last great sources of legal adventure. Rick Steves, host of public television’s “Rick Steves’ Europe” and author of over 50 travel books on Europe says that affording travel is a matter of priorities. You can travel simply, safely, and comfortably anywhere in Europe for $100 a day plus transportation costs. A tight budget forces you to travel close to the ground, meeting and communicating with the people. Never sacrifice sleep, nutrition, safety, or cleanliness in the name of budget; simply enjoy the local-style alternatives to expensive hotels and restaurants. In addition to his public television show and pledge events, Rick also hosts a weekly radio show “Travel with Rick Steves,” a fun, hour-long, and practical talk show with guest experts and calls and questions from travelers (check your local listings). He is also a weekly syndicated columnist with the Chicago Tribune.

“Europe Through the Back Door” with Rick Steves
Join the travel expert–acclaimed for his bestselling guidebook series, public television series, and public radio shows–as he shares all the latest in smart European travel. Freshly back from lots of travels, Rick Steves explains the practical, money-saving ins and outs of independent travel. His 90-minute seminar is packed with tips on getting the most out of every mile, minute, and dollar on your next trip.

Travel as a Political Act
Rick Steves–author of over 50 European travel guidebooks and host of the public television series, Rick Steves’ Europe–believes that thoughtful travel expands our world view and shapes how we address the challenges confronting our nation politically. Having spent four months a year overseas for the last 30 years, Rick feels that travel helps us “challenge truths we were raised to think were self-evident and God-given.” His classes have helped millions of Americans not only enjoy maximum travel thrills per mile, minute and euro…but become better citizens of our planet. Rick shares how the other 96 percent of humanity sees our nation and explores how his social activism has grown naturally out of his travel experiences. He’s fresh back from lots of travels and will be on hand after his talk for questions and autographs.

Rick Steves’ Iran
Rick Steves calls Iran “the most poorly understood yet fascinating land” he’s ever visited. In his upcoming 90-minute slideshow, he takes us on a journey of discovery. His hope? To learn more about this perplexing nation whose government so exasperates America. And to better understand the 70 million people who call Iran home. Steves’ presentation shows the splendid monuments of Iran’s rich past, as well as Iranian life today–in its giant metropolis, historic capital, and in a countryside village. Steves captures Persian culture vividly: from Friday prayer in a mosque to non-conformist teen fashions at the mall; from anti-American murals to the hospitality of a family dinner; and from the tranquility of rural life to the crazy traffic of modern Tehran. Rather than a political talk dealing with the complex issues that confront our governments, Steves’ presentation is a travelogue, designed to increase our understanding of a mighty, ancient nation that has been a leader in its corner of the world for 2,500 years.

Rick Steves advocates smart, affordable, perspective- broadening travel. As host and writer of the popular public television series Rick Steves’ Europe, and best-selling author of 40 European travel books, he encourages Americans to travel as “temporary locals.” He helps American travelers connect much more intimately and authentically with Europe — and Europeans — for a fraction of what mainstream tourists pay.

Over the past 20 years, Rick has hosted over 100 travel shows for public television, and numerous pledge specials (raising millions of dollars for local stations). His Rick Steves’ Europe TV series is carried by over 300 stations, reaching 95 percent of U.S. markets. Rick has also created two award-winning specials for public television: Rick Steves’ European Christmas and the ground-breaking Rick Steves’ Iran. Rick writes and co-produces his television programs through his company, Back Door Productions.

Rick Steves airs across the country and has spawned a popular podcast. Rick has also created a series of audio walking tour podcasts for museums and neighborhoods in Paris, Rome, Florence and Venice (with more tours, including London, coming in 2010).

Rick self-published the first edition of his travel skills book, Europe Through the Back Door (now updated annually), in 1980. He has also written more than 40 other country, city and regional guidebooks, phrase books, and “snapshot” guides. For several years, Rick Steves’ Italy has been the bestselling international guidebook sold in the U.S. In 2009, Rick tackled a new genre of travel writing with Travel as a Political Act, reflecting on how a life of travel has broadened his own perspectives, and travel can be a significant force for peace and understanding in the world. Rick’s books are published by Avalon Travel, a member of the Perseus Books Group.

In addition to his guidebooks, TV and radio work, Rick is a syndicated newspaper columnist with the Tribune Media Services. He appears frequently on television, radio, and online as the leading authority on European travel.

Rick took his first trip to Europe in 1969, visiting piano factories with his father, a piano importer. By the time he reached 18, Rick jokes, “I realized I didn’t need my parents to travel!” He began traveling on his own, funding his trips by teaching piano lessons. In 1976, he started Europe Through the Back Door (ETBD), a business which has grown from a one-man operation to a company with a well-traveled staff of 70 full-time employees. ETBD offers free travel information through its travel center, website (www.ricksteves.com), European Railpass Guide, and free travel newsletters. ETBD also runs a successful European tour program with more than 300 departures — attracting around 10,000 travelers — annually.

Rick is outspoken on the need for Americans to fit better into our planet by broadening their perspectives through travel. He is also committed to his own neighborhood. He’s an active member of the Lutheran church (and has hosted the ELCA’s national video productions). He’s a board member of NORML (working to reform marijuana laws in the USA). And Rick has provided his local YWCA with a 24-unit apartment building with which to house homeless mothers.

Rick Steves spends about a third of every year in Europe, researching guidebooks, filming TV shows, and making new discoveries for travelers. He and his wife separated in mid-2009 and were divorced in March, 2010. Rick lives and works in his hometown of Edmonds, Washington, where his office window overlooks his old junior high school.