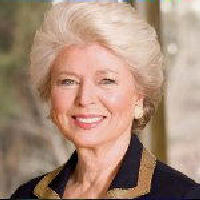 Marilyn Van Derbur, crowned Miss America 1958, stood tall and beautiful as she possessed looks, wit, and intelligence. She also had deep down within her, a devastating secret – one secret that even she did not speak or admit. From the age of 5 until she was 18, Marilyn’s wealthy and prominent father, sexually molested her. As a coping mechanism, Van Derbur processed the tragic nightlife by dissociating herself from the abuse. She did this by creating two people or personalities within her – a daytime child and a nighttime child. Neither was aware of the other’s existence. The feelings of abuse of this kind, or any kind, are “too intense for a child to absorb; that’s why children split their minds”, explains Van Derbur. Marilyn is a nationally recognized motivational speaker. She gives survivors of sexual abuse the most valuable gift of all, hope.

Van Debur wants to spread the word to anyone else who might have lived in the daylight while harboring a night-child. “You have to face the terror”, Marilyn urges. At the age of 45, Marilyn Van Debur began her journey from darkness into light by speaking the word, “incest”, out loud, by revealing the secret that had caused her so much suffering and shame for so many years. Since that time, she and her family have helped establish an adult survivor program in Denver, and she has co-founded two national non-profit organizations formed to strengthen the laws protecting child victims of sexual abuse. Of the utmost importance, her courage has inspired countless other victims to come out of the darkness and into the light.

Miss America By Day
Marilyn Van Derbur’s incredible story of being a sexual abuse victim and overcoming her childhood trauma. Men and women who are survivors of sexual trauma, incest survivors, and those with sexual abuse repressed memories continue to be ever-changed by Marilyn’s presentation including the trauma, the disbelief she endured and the healing process for all sexual abuse victims. 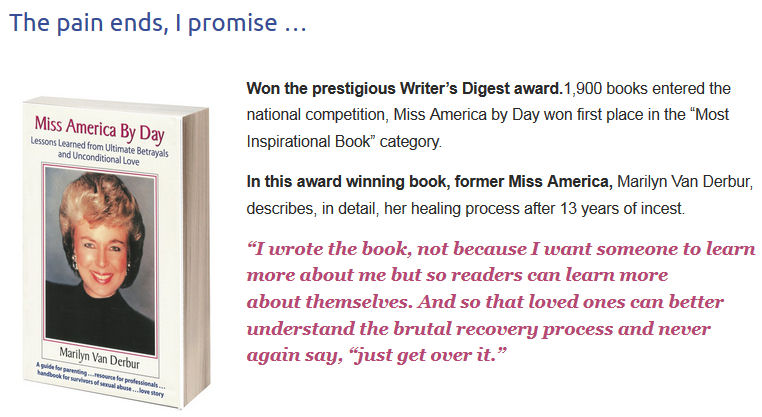 “I wrote the book, not because I want someone to learn more about me but so readers can learn more about themselves. And so that loved ones can better understand the brutal recovery process and never again say, “just get over it.”

Marilyn Van Derbur was crowned Miss America while she was a student at the University of Colorado. She received a Bachelor of Arts degree, with Phi Beta Kappa honors.

Van Derbur chose motivational speaking as her career and was later named “Outstanding Woman Speaker in America” after 30,000 questionnaires were sent to business and civic meeting planners asking whom they considered to be the outstanding speaker. For 16 years, she was the only woman guest lecturer for General Motors.

Marilyn has received numerous awards and acknowledgments for her work, including being the first woman to be given the highest speaking award possible by the National Speakers Association and induction into the Colorado Women’s Hall of Fame. With a desire to motivate teenagers as well as executives, Marilyn also became United Air Lines “Youth Speaker” and addressed 50 youth conferences each year.

During the course of her exceptional motivational speaking career Van Derbur has produced 24 films, two of which won national and international awards. One was shown on prime-time PBS and eight others have been shown in hundreds of classrooms. Marilyn is requested nationwide as a prominent convention keynote and motivational speaker, now speaking on the topic of sexual abuse prevention and recovery.

As a childhood incest survivor, she has devoted much of her adult life to raising national awareness and understanding of sexual abuse and its long-term effects. In 1989 her family funded an adult incest survivor program in Denver, and in 1993 she co-founded two national not-for-profit organizations dedicated to public education and strengthening laws protecting victims of sexual abuse.

For her tireless work in the area of childhood sexual trauma awareness. Marilyn has received many awards and much recognition including, the “Exceptional Achievement in Public Service from the Secretary of Health and Human Services, Washington D.C.”. Since her story of incest became public, Marilyn has spoken in over 500 cities and answered tens of thousands of letters and emails from survivors looking to her for support.