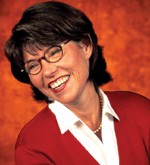 One of the most astute political observers of the age, Margaret Carlson has forged a career calling it how she sees it, and penning a popular column for TIME magazine – Public Eye – for over a decade. Carlson has also commented on the political news of the day for FOX News and MSNBC. Her spirited writing as the chief political correspondent for Bloomberg News and the Washington editor of The Week, along with her 15 years of experience as a regular panelist on CNN’s The Capital Gang, have made her one of the most recognized and respected voices in political journalism.

Carlson brings Washington to life, and unveils its political culture, for audiences across the country, including an insider’s look at the Obama Administration, Congress, the fallout from the 2010 midterm elections and what to expect in the 2012 Presidential race. Carlson is author of Anyone Can Grow Up: How George Bush and I Made It To the White House, in which she expands on her writings about presidents, politics, morals, children, family and life lessons.

View from the Capitol: U.S. Political Headlines
A leading political columnist, Margaret Carlson offers insightful and incisive commentary on the Washington political scene, presenting an overview of the current state of public affairs, the elections, the media and public policy. With an eye to the future, Carlson evaluates the Obama Administration, the 2012 elections and what today’s news out of Washington means for America’s future.

Margaret Carlson was named a columnist for TIME magazine in February 1994. Her column, Public Eye, makes Carlson the first woman columnist in the magazine’s 78-year history.

Prior to coming to TIME, Carlson served as the magazine’s deputy Washington bureau chief, after serving as a White House correspondent. In addition to her duties at the magazine, she serves as a panelist on CNN’s political programs “Inside Politics” and “The Capital Gang.”

In addition to covering Campaign 2000, during which she spent time with both Al Gore and George W. Bush, Carlson has covered the last four presidential elections. In her column, she has regularly commented on cultural and political issues, including President Bill Clinton’s impeachment trial, the campaign finance scandals, the state of feminism, and education issues.

Carlson joined TIME in January 1988 from the New Republic, where she was managing editor. Her journalism career has included stints as Washington bureau chief for Esquire magazine, editor of Washington Weekly, and editor of the Legal Times of Washington.

Carlson earned a law degree from George Washington University Law School in Washington, D.C. She completed her undergraduate work at Penn State University, where she majored in English.

She has one daughter and lives in Washington, D.C.