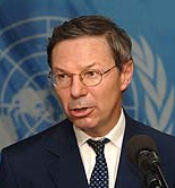 A Frenchman by birth, Jean-Marie Guéhenno does not fit the traditional mold of French diplomats; an ambassador who is by training a senior financial judge, he has also been a banker, a professor, a journalist and a writer. He strongly believes in the need to build bridges between work groups as well as between countries and cultures. Strongly believing in transparency and active leadership, he served two Secretaries-General of the United Nations and his tenure as the Under-Secretary-General for Peacekeeping was the longest in the history of the United Nations.

Jean-Marie Guéhenno drew on his experience as head of policy planning at the end of the Cold War to become the author of a world-acclaimed book, The End of the Nation State, which was the first to identify globalization as the driving force of our time and was translated in more than a dozen languages. His background gives him a unique capacity to put political issues in a broader strategic perspective. Jean-Marie Guéhenno brought to the United Nations a unique combination of managerial, diplomatic and strategic experience. A true global citizen, he has been recognized as a successful change manager, a key actor in a world in transition and a staunch advocate of the disenfranchised.

What is the Future for Peace Around the World?
Jean-Marie Guéhenno explores how failing states, migrations, nuclear proliferation, and climate change are reshaping the post-Cold War world, creating new fault lines, and posing new challenges for our security. From his unique perspective as the head of Under-Secretary-General of UN Peacekeeping Operations for eight years and his involvement with world leaders, he assesses the capacity of the international community and its institutions to cope with these challenges, the evolution of relations between the key powers, and their implications for the stability and prosperity of the world. He identifies emerging opportunities in Africa and other places that have not yet benefited from globalization, and describes how to take advantage of a new strategic environment, which he characterizes as less predictable, less controlled, but also more open to those who will know how to seize opportunities.

Recovering from Conflict
Drawing on his unique experience with states in conflict or emerging from conflict, such as Afghanistan, the Democratic Republic of the Congo, Haiti, Sudan, and Timor, Jean-Marie Guéhenno explores what can be done to address one of the main challenges of our time. He identifies the risk factors that can plunge a country into crisis. Using concrete examples of recent post-conflict strategies, he describes both the role and limitations of military power, and the need to integrate the military effort in a broader political and economic strategy. He outlines the implications for the futures of military forces and the civilian capacities that states, as well as nongovernmental organizations and the private sector, can provide.

Leadership in Times of Crisis
Jean-Marie Guéhenno has led an unprecedented growth of UN peacekeeping, which the Rand Corporation has recognized as remarkably cost-effective. During the last decade, UN peacekeeping almost quadrupled, and the UN now deploys close to 130,000 peacekeepers worldwide: military, police, and civilians, from more than 100 different countries. Jean-Marie Guéhenno explains how—even in the difficult context of a public bureaucracy—he has motivated a diverse workforce. He shares his experience of leadership and describes the tools that he used, including internal and external communication strategies to build a team, promote accountability, and manage risk. He also expands on crisis management and the media.

Jean-Marie Guehenno has been involved in international affairs for the past 25 years. He is presently engaged with governments and private partners in developing effective post-conflict stabilization strategies that draw on his experience in peace operations and risk-management.

Guehenno, as the Under-Secretary-General for peacekeeping operations from  2000  to  2008, became the longest-serving head of peacekeeping. He led the biggest expansion of peacekeeping in the history of the United Nations. In this role, he oversaw a budget of US $7 billion supporting the deployment of  some  130,000  personnel  in  18  different operations. He has been at the forefront of efforts to address the conflicts in Africa, from the Democratic Republic of the Congo to Darfur, as well the new strategic  challenges,  from  Afghanistan  to  Kosovo and Georgia. He has worked with the Security Council and with governments and heads of state around the world to obtain the political and material support necessary to carry out his mission.

Before joining the United Nations, Guehenno had a distinguished career in the French government and in the private sector, contributing to the strategic, defense, and management experience that allowed him to successfully address the challenges of complex peace operations.

Guehenno was the director of policy planning in the French Ministry of Foreign Affairs from 1989 to 1993, when the Cold War ended, and was directly involved in the critical decisions that shaped the post-Cold War order. Subsequently, as the ambassador to the Western European Union, he helped lay the foundations of a renewed European defense effort. As the chairman of the French Institute of Higher Defense Studies from 1998 to 2000, he focused his efforts on strengthening relations between the defense community and the broader public. Prior to joining the United Nations, he was also an advisor to the Secretary General of the United Nations on disarmament matters.

Guehenno brought to his international assignments a legal and management experience gained as a senior auditor and judge of the Court of Audit of France, where he oversaw major defense programs and financial institutions. During that time, he was seconded to the Banque de l’Union Européenne as strategic advisor to the chairman of the bank. Guehenno is also an avocat, member of the Paris Bar.

Throughout his career, Guehenno has sought to share his experience with a broader public. He has published articles in many newspapers and magazines, and is the author of the End of the Nation- State (1993), a book acclaimed by The Economist, and which has been translated in a dozen languages. It is considered as the first book to have identified the challenges of globalization. Guehenno has also taught extensively, including as a professor at the prestigious Institut d’Etudes Politiques of Paris.

Guehenno holds the highest decoration of the Federal Republic of Germany, and is an officier de la Légion d’Honneur. Guehenno is bilingual English-French. He is a graduate of three of the most elite schools of the French system of education, the Ecole Normale Superieure, the Institut d’Eudes Politiques, and the Ecole Nationale d’Administration (ENA).  He is currently a non resident senior fellow at the Brookings Institute and a senior fellow at the Center on International Cooperation (New York University.)