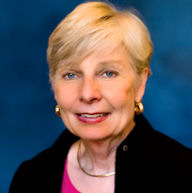 A journalistic trailblazer, Eleanor Clift takes her audiences into the corridors of power for an insider’s view of Washington. Providing tested journalistic insights on the issues and intrigues that surround our political process, Clift gives audiences her take on today’s headline news including a look at President Obama, Congress and the changes wrought by the 2010 midterm elections. Drawing on her reputation as one of Washington’s most trusted political analysts, Clift tells the stories behind the stories, gleaned from her years building relationships and sources with the nation’s key political players.

Whether giving her take on health care reform, how President Obama is living up to his promises or what the role of old media is in a new media world, Clift always cuts to the quick and gives audiences her keen perspective on today’s most important issues. Clift is a contributing editor at Newsweek and author of three books, including her latest book Two Weeks of Life: A Memoir of Love, Death and Politics, which examines the debate over the right to die through the lens of her personal experience with the loss of her husband. Clift is a longtime panelist on the weekly public affairs show The McLaughlin Group and she also provides commentary for FOX News.

Eleanor Clift on Today’s News
One of Washington’s best known and most respected journalists, Eleanor Clift lends her thoughtful analysis on today most pressing issues including:

Politics
Grading President Obama: From style to substance, is he keeping his promise of change? How did his agenda affect the 2010 midterm elections, and what will it mean in 2012?

Women and Politics
From suffrage to sexism, Clift looks at the obstacles that remain and how to shatter the last glass ceiling.

Healthcare
With reform on the horizon, Clift can talk about the politics of healthcare as well as offer a personal perspective on end of life care and the choices before us individually and as a society. Doctors can tell us what we can do; they can’t tell us what we should do.

First Ladies
Michelle Obama fully understands the power of her platform, and she is using it to convey the priorities and values she shares with her husband. An examination of the role and how Obama, a Princeton and Harvard-educated lawyer, is navigating the line between style and substance.

Media
The shrinking role of the mainstream media and its impact on politics. Can newspapers survive? Does anybody under 30 care if they don’t? Barack Obama won the presidency in part because he understood the new tools of communication and mobilized them to his advantage.

Two Weeks of Life: The Intersection of Medicine and Morality
Eleanor Clift watched her husband, journalist Tom Brazaitis, dying of cancer at home at the same time as she was commenting on the debate over Terri Schiavo, who was dying in a Florida hospice. The two passed away within a day of each other. Clift’s book Two Weeks of Life: A Memoir of Love, Death, and Politics alternates between these two stories to provide a moving Commentary on how we deal, or fail to deal, with dying in modern America. Clift will provide audiences with:

Eleanor Clift is a contributor to Newsweek magazine and the Daily Beast web site. She writes about politics and policy in Washington, and the partisan clashes that are the result of divided government. She is currently assigned to the White House where President Obama faces a difficult reelection. Clift has covered every presidential campaign since 1976 and brings her perspective to analyze the contest between a beleaguered incumbent and an opposition party torn between traditional economic conservatives and the upstart Tea Party.

Clift is a regular panelist on the syndicated talk show, “The McLaughlin Group.” She has appeared as herself in several movies, including “Dave,” “Independence Day,” “Murder at 1600,” “Rising Sun,” and the CBS series, “Murphy Brown.”

Clift and her late husband, Tom Brazaitis, who was a columnist for the Cleveland Plain Dealer, wrote two books together, “War Without Bloodshed: The Art of Politics” (Scribner, 1996), and “Madam President: Shattering the Last Glass Ceiling (Scribner, 2000). Madam President is available in paperback (Routledge Press). Clift’s book, “Founding Sisters,” is about the passage of the 19th amendment giving women the vote (John Wiley & Sons, 2003). Her recent book, “Two Weeks of Life: A Memoir of Love, Death and Politics” (Basic Books, 2008) is about the loss of her husband together with an examination of how we deal with death in America. “Selecting a President,” written with Matthew Spieler (Thomas Dunne Books) will be available May 2012.

Formerly Newsweek’s White House correspondent, Clift also served as congressional and political correspondent for six years. She was a key member of the magazine’s 1992 election team, following the campaign of Bill Clinton from the start to inauguration day. In June 1992 she was named Deputy Washington bureau chief.

As a reporter in Newsweek’s Atlanta bureau, Clift covered Jimmy Carter’s bid for the presidency. She followed Carter to Washington to become Newsweek’s White House correspondent, a position she held until 1985. Clift began her career as a secretary to Newsweek’s National Affairs editor in New York. She was one of the first women at the magazine to move from secretary to reporter.

Clift left Newsweek briefly in 1985 to serve as White House correspondent for The Los Angeles Times. She returned to Newsweek the following year to cover the Iran-Contra scandal, which embroiled President Reagan and tarnished his administration. Clift has covered every presidential campaign since 1976, and was part of Newsweek’s special project team following the 1984, 2000, 2004 and 2008 elections, each of which resulted in a book. The most recent, “A Long Time Coming,” written by Evan Thomas and based on the Newsweek team’s reporting (Public Affairs, 2009) chronicles the history-making campaign of Barack Obama.

Clift lives in Washington, D.C., where she is on the advisory council of the International Women’s Media Foundation, the board of the Center for Politics and Journalism, and the Board of Governor’s of the National Hospice Foundation.