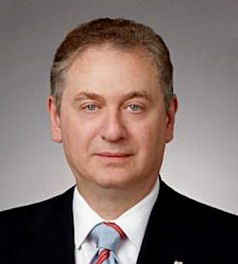 Attorney David B. Rivkin, Jr. has studied the U.S. Constitution and related historical documents with scholarly rigor, and has authored incisive commentary on the critical constitutional issues of our day. Now in private practice, Rivkin’s lengthy career has been distinguished by service in the White House during two presidential terms, in both the U.S. Department of Justice and the U.S. Department of Energy. He is a well-known writer and media commentator on matters of constitutional and international law, as well as on foreign and defense policy.

A trusted representative of conservative viewpoints, Rivkin is frequently called upon to testify before the Senate Judiciary Committee and other congressional committees. He testified as a minority party witness in the confirmation hearings of Supreme Court Justice nominee Sonia Sotomayor, and in 2009, before the Senate Judiciary Committee’s Subcommittee on the Constitution regarding “The Legal, Moral, and National Security Consequences of ‘Prolonged Detention.’” Rivkin boasts an extensive body of work; his legal opinion pieces and commentary include more than 350 articles and numerous guest appearances on radio, and network and cable televisions programs, such as CNN, NPR, BBC, Fox News, NBC, ABC, CBS and Al Jazeera.

Rivkin develops his positions on critical public and legal matters not from political ideology, but from a reasoned interpretation of the U.S. Constitution, legislation, judicial rulings, and legal opinions. David Rivkin currently represents foreign governments and corporate entities on legal, political, economic, defense, and public relations matters. He is a Visiting Fellow at the Nixon Center, Contributing Editor at The National Review, and a member of the Advisory Council at The National Interest magazine, and currently serves as Co-Chairman of the Center for Law and Counterterrorism at the Foundation for Defense of Democracies.

David B. Rivkin Jr., a partner at Baker Hostetler LLP, is a member of the firm’s litigation, international and environmental groups and he co-chairs the firm’s appellate and major motions team. He has extensive experience in constitutional, administrative and international law litigation.

Mr. Rivkin has been involved in numerous high-profile cases. He has represented the 26 States that have challenged the constitutionality of the Patient Protection and Affordable Care Act and was the lead outside counsel in the District Court and Court of Appeals. He also represented the Republic of Croatia before the International Criminal Tribunal for the Former Yugoslavia and the International Court of Justice for a number of years on a wide range of issues involving international humanitarian law and the laws of war. Mr. Rivkin also has considerable experience with litigation involving national security-related matters, including defending Bivensactions brought against former Secretary of Defense Donald H. Rumsfeld. From 2004 through 2007, he served as an expert member of the United Nations Subcommission on the Promotion and Protection of Human Rights.

Mr. Rivkin has represented corporations in alien tort statute and civil RICO litigation, as well as in challenges to federal agency actions and constitutional challenges to state statutes. He has provided compliance advice to companies, as well as handled enforcement proceedings before government agencies on issues arising out of various multilateral and unilateral sanctions (ITAR, EAR and questions relating to dealings with proscribed countries), Foreign Corrupt Practices Act (FCPA), anti-boycott issues and environmental and energy matters.

From 1993 to December 1999, Mr. Rivkin was a member of the Hunton & Williams law firm. Prior to returning to private practice, Mr. Rivkin served from 1987-1993 in various capacities in the federal government. During 1992-1993, he was Associate Executive Director and General Counsel of the President’s Council on Competitiveness at the White House. While there, he was responsible for the review and analysis of legal issues related to the regulatory review conducted by the Council.

He handled the development and implementation of President George H.W. Bush’s deregulatory initiatives, which entailed review of all existing federal regulatory strictures and the application of a more rigorous cost-effective standard to new regulations. His substantive areas of responsibility included international sanctions, energy, environment and tax issues. He played a leading role in the development of Order 636, which introduced major changes to the regulation of the interstate natural gas pipelines, and simultaneously served as the Special Assistant for Domestic Policy to then Vice President Dan Quayle.

In addition to his positions with the Council on Competitiveness and the Department of Energy, he served in the office of then Vice President George H.W. Bush as Legal Advisor to the Counsel to the Vice President, in the White House Counsel’s Office and as Deputy Director of the Office of Policy Development (OPD), U.S. Department of Justice. While at OPD, he worked on a wide variety of constitutional, domestic and international issues, including judicial selection, legal policy, immigration and asylum matters and intelligence oversight.

Prior to embarking on a legal career, Mr. Rivkin worked as a defense and foreign policy analyst, focusing on Soviet affairs, arms control, naval strategy and NATO-related issues, and served as a defense consultant to numerous government agencies and Washington think tanks.