Chris Crowley’s presentations convey the essence of his Younger Next Year books, with all the passion, eloquence and humor that have made them national best sellers. He is especially popular among executives and professionals in their forties and fifties who are just noticing the aging process and are not loving it. His talks are optimistic, motivational and funny.

The core message makes sense and is hugely important for every one from the age of forty on… maybe from the age of thirty on. But the emphasis is different for each group and are tailored, according to the age and interests of the audience. Crowley talks to groups of corporate executives, professional associations, clubs and fitness organizations and typically covers the fundamental science that is the basis for the Revolution in Aging; he goes on to discuss the basic things that people need to do to join the revolution.

Crowley is the co-author (with his close friend and doctor, Henry S. Lodge, M.D.) of the New York Times best seller, Younger Next Year and the follow-on book for women. The books have sold over a million copies and been translated into 20 languages.

The Revolution in Aging
In this presentation, Chris Crowley discusses the basic things that people need to do to join the Revolution. There is amusing (and un-scary) advice about physical exercise (heavy on the underlying reason that different kinds of exercise makes sense … how it works on the inside).

All presentations can be tailored, according to the age and interests of the audience. Each core message is hugely important for every one, but the emphasis is altered according to the audience. For example, audiences who are, for the most part, far from retirement, the emphasis is on physical and emotional fitness as a foundation for a more effective professional (and personal) life. For older audiences, the emphasis is more squarely on questions of aging, retirement and the creation of a parallel life, before retirement, to set the stage for profound changes to come. 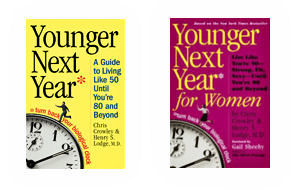 Chris was born in Salem Massachusetts in 1934 (where they hanged the witches, by the way; it was in Europe that they burned them). He graduated from Exeter (1953), Harvard College (1957) and The University of Virginia Law School (1965). He spent his 25 year professional career at the New York City law firm, Davis Polk, most of it as a partner in litigation (he is still “of counsel” but does not practice). He handled the usual run of big securities and antitrust cases and investigations. Some highlights: he led a team of 40 lawyers in the largest contested take over case up to that time. He also brought – and successfully argued in The Supreme Court – a pro bono case to get more African-American and Hispanic policemen hired and promoted in the New York City Police Department. He says that he was that comparative rarity: a happy lawyer and that he may have retired a little too young (at 57). He explains that he “wanted to live more than one life.”

He retired in 1991 and, not long after, he and Hilary moved to Aspen Colorado where she painted and he lived his long-delayed dream of being a ski–bum for a while. He also worked on various writing projects and came up with the idea for what would become the Younger Next Year books. He and Hilary are both passionate skiers, bikers, sailors and rowers.

They moved back east in 1997, a year after Hilary broke her neck in a fall in a steep Victorian house in Denver where she was visiting to do a portrait. Her eventual recovery (she was a quadriplegic for a time and is “one in a thousand” to walk after an accident this grave)…her recovery is the central miracle in their lives. Today she is back on her skis, her bike and so on. They are very close to their three children, some of whom are older than some of them, and their six grandchildren. And to the remarkable dog, Olive, a Havanese and successor to Aengus, the Weimaraner in the books. There may be another Weimaraner soon.