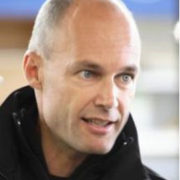 ﻿Bertrand Piccard, doctor and psychiatrist, explorer and aeronaut, combines science and adventure to deal with today’s global challenges. Always interested in the study of human behavior in extreme situations, he was one of the pioneers of hang gliding and micro-light flying in the 1970s. Qualified as a balloon pilot, he won the first transatlantic balloon race in 1992. Piccard then initiated the “Breitling Orbiter” project and completed with Englishman Brian Jones the first ever non-stop round-the-world balloon flight, achieving the longest flight in terms of both duration and distance in the history of aviation: 45,755 kilometers in 19 days, 21 hours and 47 minutes, capturing a total of 7 world records.

After this circumnavigation, which was considered the last great adventure of the 20th century, he launched the Solar Impulse project to fly around the world with a solar powered airplane, without any fuel, in order to demonstrate the potential of the new technologies for sustainable development. In summer 2010, the prototype became the first airplane ever to fly a complete day and night cycle on solar energy only.

Dr. Piccard became a sought-after speaker both by the public and by big companies who invite him to address their management, employees or clients. He knows that his audience isn’t there to learn how to fly a balloon, but rather to find in his experience a source of inspiration for their private or professional lives. Using his aerial exploits as a backdrop, Bertrand Piccard illustrates his concept of the psychology of life, human communication, team-work, motivation, pioneering spirit, as well as how to deal with stress, uncertainty and crises. At the request of some audiences, he also covers medical topics such as the use of hypnosis and self-hypnosis.

Adventure is a State of Mind: The Metaphor of the Round-the-World Balloon Flight

Be a Balloonist in Your Business

Team Spirit and the Psychology of Communication

How To Play With the Winds of Life

Hypnosis and Self-hypnosis
(for audiences interested in medical topics)

Bertrand Piccard was born on March 1st 1958 in Lausanne (Switzerland) into a family of explorers and scientists. His grandfather was the first person to explore the stratosphere and he invented the bathyscaphe with which his father dived to the deepest point in the oceans. Bertrand seemed to be predestined to perpetuate one of the greatest family adventures of the 20th century. Married, and father of three children, this scientist- adventurer, psychiatrist and aeronaut combines science and adventure to explore the human soul.

After a classical education (latin/greek), he studied medicine, became a senior consultant in a psychiatric hospital, and specialised jointly in psychiatry and psychotherapy for adults and children. His doctoral thesis entitled “La Pédagogie de l’Epreuve” was awarded a prize by the Faculty of Medicine at Lausanne in 1996. An expert in hypnotherapy, he is a lecturer and supervisor for the Swiss Medical Hypnosis Society.

Always interested in the study of human behaviour in extreme situations, he was one of the pioneers of hang gliding and microlight flying in the 1970s and became European champion in hang-glider aerobatics (1985). After qualifying as a balloon pilot, he won, with Wim Verstraeten, the first transatlantic balloon race (Chrysler Challenge, 1992) and then initiated the “Breitling Orbiter” project.

Captain of the three attempts, he succeeded with the Englishman, Brian Jones, the first nonstop round-the-world balloon flight, achieving the longest flight in terms of both duration and distance in the history of aviation : 45,755 kilometres in 19 days, 21 hours and 47 minutes (capturing a total of 7 world records). After this circumnavigation, considered the last great adventure of the 20th century, Bertrand Piccard and Brian Jones were decorated with the Olympic Order and the gold medal of the French Ministry of Youth and Sport and received among others the highest distinctions of the Fédération Aéronautique Internationale, the National Geographic Society, the Explorer’s Club, and numerous aeronautical , scientific and sporting associations in Europe and the United States of America.

An Honorary Professor, Bertrand Piccard also received Honorary Doctorates in Science and Letters, the Légion d’Honneur, the Grand Prix of the Académie des Sciences Morales et Politiques de l’Institut de France and was appointed goodwill ambassador for the United Nations Population Fund (UNFPA). His name figures in the 2000 edition of the Larousse encyclopaedia alongside those of his father and grandfather. Together with his co-pilot and their sponsor, Breitling, he created the « Winds of Hope » humanitarian foundation destined to use the financial and media impact of the round-theworld flight to fight forgotten and neglected sufferings on our earth. The first action,

implemented in conjunction with the WHO, concerns the fight against Noma, a little known illness which hideously disfigures the faces of thousands of children in very poor countries.