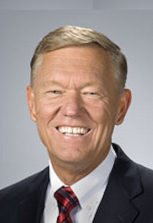 An unapologetic advocate of free enterprise and privatization, Barry Asmus is recognized as a revolutionary thinker who delivers his ideas in an energy-filled entertaining presentation. Asmus doesn’t just talk policy – he makes it happen. A senior economist for the National Center for Policy Analysis, Asmus has directly influenced how world leaders approach social security, health care, monetary and fiscal policy and other equally complex issues. With presentations customized to reflect your particular economic policy needs, Asmus helps audiences understand major policy issues – without all the jargon.

Offering an invigorating examination of a changing world, Asmus explores the limitless opportunities emerging from a borderless and knowledge-driven society, sharing the international economic and political trends shaping business and investment strategy in today’s global economy. A sought after economist who USA Today recognized as one of the nation’s top 5 most requested speakers, he is the author of many books including his most recent Bulls Don’t Blush, Bears Don’t Die.

America’s Economic Future
The United States is fighting to come back from the deepest recession since the Great Depression. What economic policies would be most helpful to create jobs and economic growth? Can America compete globally with our current tax system, two trillion dollars of annual government regulation and costly new health care policy? What are the inflationary implications of our current spending levels, monetary easing and national indebtedness? Dr. Asmus will give his views on America’s three unstoppable trends and outlook for the future.

Globalization: International Prosperity and Its Impact on America
As the current world economy speeds from $65 trillion of world GDP in 2011 to $130 trillion in 2030, will America hold on to its number one position? Will the world’s emerging countries rush to urbanization provide an opportunity for American expertise and trade? Dr. Asmus’ twenty-five years experience of tracking over a hundred of the world’s economies in an economic freedom index helps clients identify both growth and opportunity prospects.

Healing Health Care in America
As the national health care countries of the world move away from a single payer system, why is the U.S. moving towards it? When does NHC work for a country and when does it not? What five steps must America take to empower medical consumers and force health care providers to compete? Competition works in every other sector of the economy, why not health care? The National Center for Policy Analysis is widely recognized for its health care expertise on affordable, portable and transparent patient controlled alternatives.

Powering America’s Energy Future
North America could become the largest energy producer and exporter in the world. The four largest gas fields in the world recently discovered in the U.S. along with its vast coal reserves are literal game changers. This is the time to increase domestic energy of all forms? Energy production will be a focal point of the next election and could be an exciting bright spot in America’s immediate future.

Dr. Barry Asmus speaks, writes, and consults on political and business issues facing America. Recognized for his views on making the U.S. a world-class competitor, he was twice voted the Outstanding Professor of the Year, as well as honored with the Freedom Foundation at Valley Forge Award for Private Enterprise Education.

Dr. Asmus is a Senior Economist with the National Center for Policy Analysis. Dr. Asmus has been named by USA Today as one of the five most requested speakers in the United States. Over the last twenty-five years, Dr. Asmus has spoken to thousands of companies and associations throughout the United States. He has testified before the House Ways and Means Committee regarding our income tax system and was a featured speaker in a privatizing Social Security conference for Western European leaders.

Dr. Asmus is the author of nine books. His book, Crossroads: The Great American Experiment was nominated for a H.L. Mencken Award. As a Professor of Economics, he was twice voted University Professor of the Year and was honored with the Freedom Foundation Award at Valley Forge for Private Enterprise Education.

Asmus also co-anchored a syndicated radio called “Perspectives on the Economy.” Dr. Asmus is an effective advocate of free market economics. He is a recognized thinker who delivers his ideas in an enthusiastic and energy filled presentation.