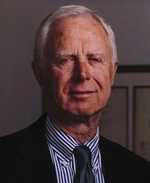 An experienced market veteran and the longest serving chairman of the Securities Exchange Commission, Arthur Levitt worked tirelessly to educate, empower and protect America’s investors, and as chairman, cared deeply about the stability of the market. He foresaw the accountability issues that contributed to Enron, and warned Congress; he pushed for improving the quality of financial reporting, including strengthening the oversight role of corporate audit committees; and worked to level the information playing field through legislation that required companies to release important information to all investors at the same time.

Levitt offers insights regarding current and potential market regulation, how it will trend and what today’s regulatory climate will mean for investors and shareholders alike. Before joining the SEC, Levitt served as the chairman of the New York City Economic Development Corporation and as chairman of the American Stock Exchange after spending sixteen years on Wall Street. He is presently Senior Advisor to The Carlyle Group and on the board of Bloomberg LLP. He’s also the author of Take On The Street: What Wall Street and Corporate America Don’t Want You to Know/What You Can Do to Fight Back.

The Future of Corporate Governance
Perhaps nothing is more important – or more difficult – than navigating the compliance and regulatory issues governing today’s market. For corporations to survive and thrive, a clear coherent understanding of Sarbanes-Oxley regulation, along with current and potential regulation is not only important, but necessary. Former SEC Chairman Arthur Levitt provides audiences with innumerable strategies to continue being compliant, and avoid penalties and investigations.

Take On The Street
Former SEC Chairman Arthur Levitt’s sympathies have always been with the everyday investor: from establishing a website that allows free and easy access to corporate filings and investor education materials to holding numerous investor town meetings throughout the country to hear investors’ concerns, Levitt has always made their needs a priority. In this presentation, based on his best-selling book of the same name, Levitt reveals the tactics of wise investment in plain language, then spells out how to intelligently invest in mutual funds and the stock market. His advice, aimed not only at individual investors but also at brokerages and investment houses, shows audiences how to interpret annual reports, understand press releases and draw from more from reliable sources.

Pensions: The Coming Crisis
The pension crisis for U.S. businesses and employees is once again making headlines, threatening to engulf U.S. automakers as it did with steel companies and the airline industry. For three decades, the current pension structure has allowed a “shell-game” system of pension accounting to develop that misleads taxpayers and investors about the true fiscal health of their cities and companies, while allowing management to make promises to workers that saddle future generations with huge costs. Solutions are underway: proposals to shore up the Pension Benefit Guaranty Corporation (PBGC) are making their way through Congress. However, the problem will only get worse unless immediate action is taken to bring accuracy, transparency and accountability to pension accounting. Arthur Levitt, former chairman of the Securities and Exchange Commission, provides an all-too-salient discussion of the current pension problems faced by today’s economy, along with recommendations about repairing them – for both the short and long term.

Arthur Levitt was the 25th and longest serving chairman of the United States Securities and Exchange Commission. First appointed by President Clinton in July 1993, the President reappointed Levitt to a second five year term in May 1998.

Investor protection was Levitt’s top priority. Throughout his tenure, Levitt worked to educate, empower and protect America’s investors. In a series of moves designed to enhance efficiency and improve competitiveness, Levitt initiated the most sweeping changes to US securities markets since the creation of the SEC. These innovative policies constituted a regulatory framework which revolutionized the structure of security markets creating, for the first time, for- profit exchanges, Alternative Trading Systems and electronic markets, while maintaining customer protection and market transparency.

• Strengthening the independence of auditors and the profession’s self-regulatory functions.

• Leveling the playing field for all investors through Regulation Fair Disclosure requiring companies to release important information to all investors at the same time.

Before joining the Commission, Levitt owned Roll Call, a newspaper covering Congress. From 1989 to 1993, he served as chairman of the New York City Economic Development Corporation and from 1978 to 1989 he wascChairman of the American Stock Exchange. He worked for The Berkshire Eagle in Pittsfield, Massachusetts and Time magazine before working for 16 years on Wall Street.

He is presently a senior advisor to The Carlyle Group, Goldman Sachs, Promontory Financial Group and GETCO, LLC, a member of the Board of Bloomberg LLP and a member of the American Academy of Arts and Sciences. He graduated Phi Beta Kappa from Williams College in 1952 before serving for two years in the US Air Force.

Levitt’s bestselling book, TAKE ON THE STREET: What Wall Street and Corporate America Don’t Want You to Know/What You Can Do to Fight Back was published by Pantheon Books in October, 2002.