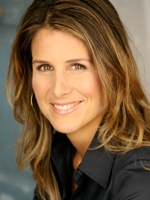 Walking away from a successful corporate career Ariane de Bonvoisin transformed her life, believing that from any change something good will come.
In her best selling book The First 30 Days, Ariane outlines the nine principles of change that successful people know in order to navigate transitional times. De Bonvoisin shares with audiences her unique background; she grew up and worked in over a dozen countries, distinguished herself with degrees from the London School of Economics and Stanford and worked for companies including BCG, Bertlelsmann, Sony, TimeWarner and Charlie Rose, but she wasn’t happy until she was able to balance her goals with her passion to help others.

Now with a successful book, her Change Nation show, a magazine column, weekly appearances on radio and TV, and through her own upcoming TV series, de Bonvoisin is determined to help others make or face any life change with optimism. Authentic, passionate and capable of touching audiences the world over, she is truly a next generational force with a foot in both worlds- one who can talk to peoples minds and touch their souls. Ariane de Bonvoisin’s amazing journey from corporate darling to entrepreneur, author and ‘transformationalist’ can inspire and help anyone contemplating or experiencing any life change.

The 9 Principles of Change
Change is the most important life skill and survival tool for the next decade. After interviewing thousands, Ariane de Bonvoisin reveals the nine habits of people who successfully navigate change, whether it is personal or professional. In a lively, and engaging manner, de Bonvoisin gets her audience to look at change differently, to evaluate their own ‘change quotient’, how to handle emotions such as fear, doubt and impatience and multiple ways to strengthen their ‘change muscle’. She discusses what makes the difference in people and companies who can handle any change. Companies are inspired to look at how good they and their employees are at navigating change and how this is rapidly becoming a core competency. She leaves her audiences with optimism, practical tools and ways of making any change easier.

Living Healthier – How to Transform the Health of Your Employees and Your Company
Tough times inevitably lead to bad habits and health challenges. Having healthy employees is rapidly becoming a competitive advantage and a core value for companies. Founder and CEO of the First 30 Days, Ariane de Bonvoisin helps de-clutter all the information about health, offering a dozen steps that really make a difference. She shares information from over 50 health experts she met and interviewed, from traditional doctors from Harvard to the Dalai Lama’s physician. Audiences will learn tips not often talked about, from food combining, to acid/alkali balances in the body, to cleansing, to building the body’s natural immunity. She is bold, bright and funny when it comes to discussing her research on health leaving audiences laughing, being amazed, and motivated by a sense of possibility based on real facts and simple daily changes to incorporate into their lives.

A Foot in Both Worlds – Combining Business and Spirituality
For so many, ambition and living spiritually– money and meaning– don’t go together. They require a difficult choice. Companies can’t do good, contribute and be profitable. Individuals can’t live spiritually, have a corporate job and a great relationship. Ariane shows us the misconception of this either/or framework so many companies/people have and inspires us to consider a new model. She reveals a new lens for us to look through in how we make important choices, what it means to live consciously in everything from relationships, to work to how we treat our health. She gives practical examples of how to combine the material and spiritual calling in day to day choices and how to live in this ‘real’ world. In a world where more people and companies are wanting to live consciously and have a sense of meaning, Ariane’s discussion will leave anyone with a sense of possibility, inspiration and clarity.

Ariane de Bonvoisin is the Founder, CEO and Chief Change Optimist of First30Days, a New York City-based media company focused on guiding people through all types of changes, both personal and professional and social or global. The company, which launched its web site, first30days.com, in February 2008 currently features

60 life change subjects, including those relevant to our times such as losing a job, selling a home, starting a

reducing debt and getting divorced. She also hosts a popular on-line show, ChangeNation, where she interviews experts and thought leaders on all aspects of life changes. With a degree in economics and international relations

from the London School of Economics at the age of 19, Ariane began her professional career at The Boston Consulting Group and worked in over a dozen countries during her tenure. After receiving an MBA from Stanford

University, she moved to New York, working with media companies Bertelsmann and Sony.

In 2000, she joined Time Warner as the Managing Director of a new $500 million digital-media venture fund. The

Fund’s mission was to take equity stakes in early-stage, potentially strategic, technology companies. Prior to her launch of First30Days and time at Charlie Rose Productions, Ariane spent a year as a Senior Advisor on a

Humanitarian Project, A DAY IN THE LIFE OF AFRICA.

The project involved the top 100 photojournalists placed in the 53 countries of Africa on a single day. Ariane had a monthly column in Redbook magazine and AdAge, is currently MSN’s Life Change Expert, a contributing editor to BusinessWeek.com, a Life Balance expert for Health Magazine and has appeared on dozens of TV and radio shows, including NBC’s Today Show, the CBS Early Show, CNN Radio and ABC News Now. She is a Huffington Post contributor and has written articles for media outlets including Yahoo, Town & Country, Advertising Age, the New York Daily News, Reader’s Digest, MSN and Media Bistro, among others. She has also been written about in Oprah magazine and USA Today.

Ariane’s most recent book entitled, “The First 30 Days: Your Guide to Making Any Change Easier” was published by Harper Collins in May 2008 and reached the bestseller list on Barnes and Noble and Amazon. Ariane embarked on a national media and speaking tour for the book. A Spanish edition was published in December 2008 by Spanish by Rayo, a division of Harper Collins and the book has now been translated in over a dozen languages. She is currently finishing her next book, A Foot in Both Worlds; Walking a spiritual path while fully being in the world.

Ariane speaks frequently around the country and abroad on issues of personal and professional change and the topic of consciousness and spiritual life. She has spoken at events including Maria Shriver’s Women’s Conference, the Pennsylvania’s Governors Conference, the Houston and Boston Leadership Conferences, the Health Conference in NYC, the IDB in Washington and international conferences. She also loves speaking to kids and youth of all ages.

She is also an accomplished athlete, having been a competitive swimmer, a ski instructor, and a runner in a series of marathons and triathlons. She also reached the summit of Mt. Kilimanjaro in January 2001, accompanied a group of students to Antarctica in December 2002. She was most recently part of a documentary movie called The Highest Pass (www.thehighestpass.com)- a motorcycle journey through the highest roads in the Himalayas, that premiered in August 2011; a journey to discover that our Highest pass is always within the heart and beyond the mind.