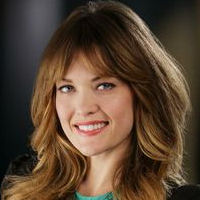 Amy Purdy has been through hardships that most of us will never face — or can even fathom. But what makes her story so incredible is not that fact that she lived a “normal” childhood and spent her high school years as a passionate artist and snowboarder then traumatically lost both her legs at age 19, but how she has persevered, taking implausible challenges and rising above them.

Today, Amy is an athlete; currently the top ranked adaptive female snowboarder in the world, she’s a spokesperson, inspirational speaker, model, advocate and spokesperson for Element Skateboards amongst other companies. Amy also spends a good amount of time helping others specifically those with physical challenges get involved with snowboarding, skateboarding, wakeboarding and other action sports through the organization she co-founded Adaptive Action Sports. Challenging herself while making a positive impact on the world is a true testament to Amy’s spirit.

• Amy had a typical childhood until losing her legs at 19 as a result of Meningitis, which has led to an adulthood of extraordinary accomplishments.
• Amy is the top ranked adaptive snowboarder in the U.S., a three-time World Cup Para-Snowboard winner, and the 2014 Paralympic Bronze Medalist.
• Amy is the co-founder of Adaptive Action Sports, a non-profit organization which helps disabled youth, young adults and wounded veterans get involved with action sports. AAS was instrumental in getting adaptive snowboarding added to the 2014 Paralympic Games.
• Three days after winning a bronze medal at the 2014 Sochi Paralympics Amy became breakout star of ABC’s Dancing With The Stars!
• In 2010 Amy was featured in CNN’s series “Breakthrough Woman”
• Amy is an accomplished model, and has worked on features with both Madonna and Nikki Sixx.
• Not only is Amy proud to be sponsored by P&G, she is also the voice talent of their global advertising campaign, “Tough Love.”
• Amy is highly experienced professional speaker, including a featured presenter at TEDx Orange Coast 2011. That presentation has been viewed over 1.4 million times

After going through this life-altering experience, Amy challenged herself to move on with her life and attain goals that even those who have both legs struggle to achieve. Just three months after her kidney transplant, Amy entered the USASA National Snowboarding Championship where she won medals in three events. Today, she is one of the top ranked adaptive snowboarders in the world, has won multiple World Cup medals and appears poised to be on the podium at the upcoming 2014 Paralympic Games in Sochi, Russia. She is the only double leg amputee competing at the world class level.

Amy’s creativity, positive outlook and her never give up attitude have opened doors to many other opportunities including being featured in a Madonna music video, a lead actress role in an award winning independent film and multiple creative modeling projects including a photo shoot with musician and artist Nikki Sixx where her legs were custom made from steel to look like ice picks.

Amy has evolved into a powerful inspirational and motivational speaker who has literally been seen by millions of people and invited to share her story to audiences around the world.

Amy’s story and images have been featured in numerous national and international publications, and in 2012 she and her longtime boyfriend, Daniel Gale, raced around the world on The Amazing Race.