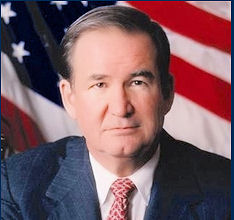 Never one to pull any punches, Pat Buchanan articulates the conservative cause, analyzing today’s issues with deftness and passion. Perhaps one of the country’s most outspoken leading conservatives, Pat Buchanan is a political analyst and regular contributor to MSNBC. A three-time presidential candidate, Buchanan also served as co-host of CNN’s Crossfire for almost 20 years and is now a regular panelist on The McLaughlin Group. A former White House speechwriter, he analyzes the day’s top political and cultural headlines including the current Congress, the Obama Administration and the 2012 elections.

Audiences find Buchanan to be engaged by the issues and unafraid to voice an informed, articulate opinion on everything from national sovereignty to the future of the conservative movement. In addition to writing a syndicated column, Buchanan is editor of The American Conservative magazine and author of several best-selling books, includingThe Death of the West, Where the Right Went Wrong, and his most recent, Churchill, Hitler and the Unnecessary War: How Britain Lost its Empire and the West Lost the World. Pat Buchanan, never one to pull punches, articulates the conservative cause, analyzing today’s issues with deftness and passion.

A Conservative View From Washington
Pat Buchanan analyzes the day’s top political and cultural headlines, examining current policies under discussion and how they could change the country’s future. With incisive analysis and articulate opinions, Buchanan discusses the battle over national sovereignty, the global economy, American foreign policy and the future of the traditional values coalition. With an eye toward the 2012 elections, Buchanan dissects what’s going on in the Obama Administration and on Capitol Hill, sharing with audiences what today’s news means for tomorrow’s political outcomes.

In 1966, Buchanan became the first full-time staffer to Richard Nixon in his legendary comeback. He traveled with the future President in the campaigns of 1966 and 1968, and served as special assistant through the final days of Watergate. On leaving the Ford White House in 1974, Buchanan became a syndicated columnist and founding member of three of the most enduring—if not endearing—talk shows in television history: NBC’s The McLaughlin Group, and CNN’s Capital Gang and Crossfire.

Buchanan has written ten books, including six straight New York Times best sellers A Republic, Not an Empire; The Death of the West; Where the Right Went Wrong; State of Emergency; Day of Reckoning and Churchill, Hitler and The Unnecessary War.

Buchanan is currently a columnist, political analyst for MSNBC, chairman of The American Cause foundation and an editor of The American Conservative. He is married to the former Shelley Ann Scarney, who was a member of the White House Staff from 1969 to 1975.