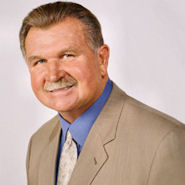 Legendary NFL player and coach Mike Ditka understands the mental attitude necessary for success. In his first year in the NFL, he caught 56 passes for the Chicago Bears and earned Rookie of the Year honors. Twenty years later he returned to the Bears as head coach, guiding the team to six NFC title games and a Super Bowl victory. Twice named Coach of the Year, Ditka is one of only two athletes to have won Super Bowl rings as head coach, assistant coach and player. Today, Ditka shares his team-building skills and drive to be the best with audiences across the country.

Ditka is a highly sought after motivational speaker and television personality. He has appeared on virtually every late night network talk show and been featured on various network newscasts. Ditka is the subject of Saturday Night Live’s continuing popular “Da Bears” skit and in 1989 he played himself in episodes of the television series LA Law and Cheers. Ditka is also one of pro football’s most visible ambassadors. He was part of CBS-TV’s playoff coverage following the 1989 season and has recently begun a new career as an NFL and PGA commentator for NBC Network. Currently, he is the co-host of CBS’ NFL Today Since his days with the Chicago Bears, Ditka has opened Iron Mike’s Grille, located in the Tremont Hotel in Chicago.

Ditka’s presentation, ACE – Attitude, Character and Enthusiasm, demonstrates how lessons he learned in a life of commitment and attention to the fundamentals resulted in victory and success – both on the field and off. An ESPN NFL analyst, regular on late night talk shows and iconic “type A” sports personality, Ditka is the author of Mike Ditka: Reflections on the 1985 Bears and Wisdom from Da Coach.

ACE – Attitude, Character and Enthusiasm
Mike Ditka delivers a powerful presentation that highlights the key characteristics people need to achieve their personal and professional goals. With his first-hand experience, clear illustrations and humorous anecdotes, he shows why he is considered one of the best motivational speakers in all of the NFL. His presentation has impact and immediate, take-home value.

Mike Ditka’s NFL career began in 1961 when the Bears made him their first round selection from the University of Pittsburgh. He had an immediate impact, catching 56 passes and earning NFL Rookie of the Year honors. Ditka played five more seasons with the Bears, earning a Pro Bowl trip each year, before being traded to Philadelphia in 1967. After two years with the Eagles, he played four more in Dallas, where he caught a touchdown pass in the Cowboys’ 24-3 win over the Dolphins in Super Bowl VI.

The final accolade to Ditka’s outstanding playing career was bestowed upon him 16 years after his retirement when he was inducted into the Pro Football Hall of Fame (1988). His 427 career receptions included 75 catches in 1964, a NFL record for tight ends until San Diego’s Kellen Winslow broke it in 1980. Ditka still holds four Bears records: consecutive games with a reception touchdown receptions, most receptions by a rookie, and most touchdown catches by a
rookie.

Ditka retired from playing following the 1972 season, but was hired by Cowboys’ head coach Tom Landry as an offensive assistant and special teams coach. In Ditka’s nine seasons the Cowboys were in the playoffs eight times, won six division titles, three NFC Championships, and the NFL crown following the 1977 campaign.

Prior to the 1982 season, Ditka signed on as head coach of the Chicago Bears, taking over a team that had had just two winning seasons in the previous 19 years. During his ten-year tenure as head coach, Ditka led the Bears to six NFC Central titles, three additional appearances in the NFC title game (each time, their opponent went on to win the Super Bowl), and a Super Bowl victory (1986). He has been awarded Coach of the Year honors (1985 and 1988) by The Sporting News, the Associated Press, and pro football writers.

Ditka is one of only two men to have won a Super Bowl as a player, assistant coach, and head coach. He is also one of only four head coaches to have recorded over 100 coaching victories in only ten seasons.

Having retired from coaching after the 1992 season, Ditka served as an NFL analyst on NBC-TV’s Sunday NFL news and highlight show, NFL Live, until January 1997, when he became the coach for the New Orleans Saints. After a short stint with the Saints, Ditka rejoined the NBC network (1993 – 1996) as an analyst on NFL Live and as a color commentator for other NBC broadcasts. Currently, Mike is a member of The NFL Today, the CBS Television Network’s NFL pre-game studio show.

Today, Ditka shares his drive and team building skills with audiences across the country. His presentation shares the lessons learned in a life of commitment, attention, and victory.