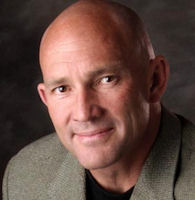 A former lead solo pilot for the Blue Angels, motivational speaker John Foley is an expert on teamwork in intense, high-stakes environments. As the leader of the Navy’s elite precision exhibition flying team, Foley expected unparalleled levels of excellence from his team and required steadfast commitment, discipline, and trust in order to reach peak performance levels. With insight from the Blue Angels, lessons from the Stanford Graduate School of Business, and his experiences in the inner circle of a venture capital company, Foley has developed a practical, effective model for developing a high performance team.

Delivering the “wow and how” of high performance, his customized multimedia presentations bring the goods your organization needs to close performance gaps and create a culture of excellence.

Learn why the Blue Angels are in the top 1/10th of 1/10th of 1 percent of all pilots–how they get there, how they stay there, and how you and your teams can translate those secrets into your organization. Using Blue Angel methodology as a model, Foley has served as an adviser to Fortune 500 corporations, professional athletic teams, venture capital companies, professional associations and educational organizations.

High Performance Climb®
Every organization depends upon the performance of their people and their teams. There are few examples where this is more dramatically demonstrated than with the Blue Angels. John Foley draws upon his experience as Lead Solo of the Blue Angels to inspire audiences and show them how to achieve substantially higher levels of performance. Foley demonstrates a simple, systematic, yet exciting approach for how to develop the clarity, focus, commitment, and trust that are necessary to achieve ever-higher levels of performance. He shows how to create buy-in and commitment for a team’s vision and goals, leading to clarity that drives execution decisions. He demonstrates how learning to focus prepares individuals for action and increases successful outcomes.

In this insightful program, he emphasizes the development of trust and respect among team members as essential to execution, and demonstrates proven ways for teams to achieve deep levels of trust. He also explains a process that he believes is the primary key to continuous improvement and exceptional growth. He drives home his message with dynamic videos of his adrenaline-pumping performance with the Blue Angels. His charismatic and enthusiastic presentations stimulate audiences emotionally and intellectually with a whole new perspective on their ability to excel. They leave the event not only transformed, but also with a set of concrete tools to immediately begin a high performance climb.

Team Oneness
The importance of teams being in sync is a concept that John Foley understands profoundly. The Blue Angels must be closely aligned in thought and action in order to accomplish their mission. Through their interdependence as a team, members are also challenged and stimulated to achieve higher levels of individual performance. In his dynamic presentations, Foley addresses the essential elements of exceptional team performance and makes them relevant, simple, and immediately actionable. He shares how to center a team around shared goals, strengthen relationships, and create unity that leads to consistent and effective results.

Employee Commitment
When people are deeply engaged in their work and feel valued, they are more productive and effective, leading to a positive impact on the bottom-line. John Foley shares how management can stimulate performance by creating a culture that values expression of gratitude and appreciation—for opportunities, co-workers, and clients. With his signature “Glad to be Here”™ mantra, Foley discusses the power behind gratitude as a way of thinking, working, and living. He shows how a culture of thankfulness engages employees on an intellectual and emotional level to create deeper commitment and raise levels of performance.

Belief Levels
As human beings, we don’t perform at our full potential. We perform at a Belief Level. Understanding our Belief Levels is a key to turning any vision into a new reality. Listen as John describes how he elevated his Belief Levels so that he could join the top 1/10th of 1/10th of 1 percent of all pilots — the Blue Angels.

Trust
Executing the “Knife Edge pass” is a highly precise maneuver originally developed by John Foley and one of his teammates when they were Blue Angels. It involves the two solo pilots flying directly at each other and crossing a CenterPoint at the same time and at the same altitude — without hitting each other. Listen as John describes how Contracts — verbal and nonverbal — played a vital role in creating the type of trust essential to executing that maneuver and why that type of trust is key to operational excellence in every organization. 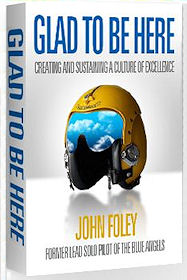 Imagine being part of an elite, highly trained team of people who routinely achieve levels of extreme precision, then improving that performance by an additional 300%! To transition from a Navy carrier pilot to Lead Solo of the Blue Angels Flight Demonstration Team, John Foley had to do exactly that. He became one of the top pilots in the world by applying principles that would become the basis for his unique Diamond Performance® Framework. Using Blue Angel methodology as a model, he developed a framework for excellence that has informed his life in a profound way and has guided his approach to achievement.

Mr. Foley went on to attend the prestigious Stanford Graduate School of Business as a Sloan Fellow and to work in venture capital in Silicon Valley. He founded CenterPoint Companies in order to share his insights and techniques with others, positioning clients to achieve high performance in both their professional and personal lives.

“What I learned most from being with the Blue Angels has nothing to do with flying itself. I learned that the process of engaging at this high level, when my very life depended on successful communication, accurate information, trust, and follow through, is the same process leaders and successful individuals use to achieve excellence.” – John Foley

The path to achieving his goals was not easy. John Foley experienced setbacks and disappointments on his journey, but he turned those challenges into opportunities for learning and improvement. And, as he describes, the pursuit of excellence never ends. He shares with audiences concrete techniques to embrace challenge and strive for ever-higher levels of performance.

Mr. Foley’s message is applicable not only to professional endeavors, but also to an individual’s personal quest for excellence. Audiences repeatedly comment that his principles are relevant to their pursuit of personal goals and deeper purpose in life.

Mr. Foley has earned three master’s degrees: one in business and one in international policy studies from Stanford University, and the third in strategic studies from the Naval War College. He completed his undergraduate degree in mechanical engineering at the US Naval Academy, where he also played in two bowl games and contributed to one of the best four-year records in Navy football history. During his years of service as a Navy carrier pilot, he won six Top Ten Carrier Pilot awards. As a Blue Angel, John gained extensive media experience with over 500 appearances including ABC, NBC, CBS, A&E, and the Discovery Channel.