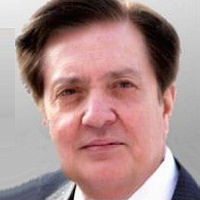 Lt. Colonel Joseph Ruffini, USA (Ret.) brings more than 25 yrs of experience from a broad array of fields including infrastructure security, counter-terrorist operations, risk management, and more to the private and civil sectors. Ruffini authored When Terror Comes to Main Street, an informative, straightforward, hard-hitting book for everyday people that boils down his lifetime of knowledge and operational experience into one all-inclusive read. His newest book, Osama Bin Laden: His Death and the Future of Al Qaeda and the Islamist Jihad, discusses what happened the day Bin Laden was caught, why people should care, and what this means for the world moving forward.

Formerly an Army lieutenant colonel charged with defending the United States and Canada against cyber intrusions, international terrorist plots, and nuclear, biological, and chemical attacks, Ruffini is currently an executive strategic information operations consultant supporting US Strategic Command, the Interagency, and the National Security Council, and US Central Command in Qatar and Iraq.

Cyber Terrorism: Awareness for Corporate America Under Attack
In this presentation, Joseph Ruffini discusses the cyber threats posed by international terrorists, which, combined with traditional kinetic events, can greatly magnify the devastating physical and psychological effects that terrorists seek to achieve against Americans.

Ya Don’t Know What Ya Don’t Know: Living and Working in an Age of Information and Terror
This session covers the basics of personal, family, and business security vulnerabilities and safeguards related to current and emerging technologies, and the bad guys who can use technology to their advantages. Business speaker Joseph Ruffini’s informative, hard hitting, yet relaxed and humorous presentation talks about the vulnerabilities associated with everyday computers, e-mail, cell phones, faxes, fiber optic surveillance technologies and devices, and common social practices.

Identity Theft 101: What Every American Needs to Know!
Professional speaker Joseph Ruffini covers the gamut on how identities are compromised, how one can work to prevent identity theft, and what actions should be taken when one discovers that his or her identity has been compromised.

The Arab Spring: The Muslim Struggle for Human Rights and Democratic Freedoms in the Middle East
The region continues to erupt in demonstrations, civil unrest and armed conflict between citizens and repressive regimes.Thousands have died trying to depose tyrannical leaders and establish fair and representative forms of government. This presentation details the Arab Spring freedom movements in Tunisia, Libya, Egypt, Yemen, Bahrain, Jordan and Syria with a photo journal of events. It discusses the “what next” in the nations where the dust has settled and the potential ramifications of the ongoing unrest in Egypt and Syria.

“If You See Something, Say Something:” Why Government, Corporations and Citizens Must Team to Preempt Terror Threat”
Current and emerging threats posed by foreign and “homegrown” terrorists present an ever-evolving challenge. The awareness, vigilance, and willingness of everyday Americans to say something if they see something will continue to be invaluable to federal, state, and local efforts to expose and thwart terror operations. This fast-paced, dynamic, and entertaining seminar stresses situational awareness, a solid working relationship between authorities and the citizens they serve, and vigilance—not paranoia. Ruffini gets the brains churning and the adrenalin pumping. 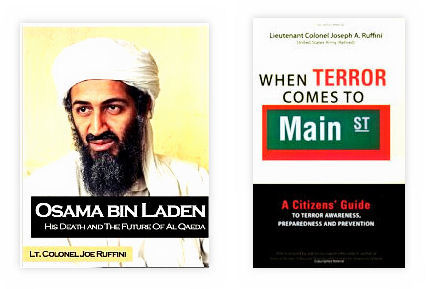 Joe Ruffini was born in Washington, D.C. He attended the University of Virginia on an Army ROTC scholarship and was commissioned upon graduation in 1974. His diverse military experience includes command of tank units in both the U.S. and British Armies and counter-terror operations in Germany and Cyprus.

In the early 1990s as a space operations expert, Joe commanded the United States Space Surveillance Center and the Space Defense Operations Center deep with Cheyenne mountain. Circa Desert Storm, then Lieutenant Colonel Ruffini became a practitioner of military deception, psychological operations, and Defense Department Special Plans and Special Technical Operations. Joe honed his expertise across the full spectrum of security disciplines, from operations and communications security, to computer, information, and physical security.

One of the first Information Warfare and Information Operations Officers in DOD, Joe Ruffini studied current and emerging world threats to the United States Government and private enterprise on a wide scale Â–from the overseas theft of American intellectual property to the terrorist attacks of 9/11, which he predicted as early as 1993.

In the private sector, Joe is a seasoned business developer, marketer, and program manager. His commercial initiatives span the spectrum from entrepreneurial projects in the Middle East funded by venture capitalists to enterprise security consulting for Fortune 1000 companies.

For more than a decade, Joe has been a strategic information operations and counter terror practitioner and theorist. A core presenter for the National Counterintelligence Executive, CIA, Langley, his common sense, no nonsense approach to personal, corporate, and national security educates, enthralls, and entertains thousands. J