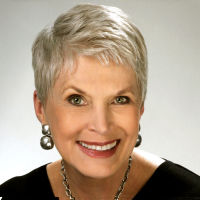 Jeanne Robertson specializes in hilarious humor based on her life experiences. Speaking to thousands of people annually, she utilizes her positively funny style to illustrate that a sense of humor is much more than a laughing matter. It is a strategy for success. Other speakers might be as witty as Jeanne. Some might even be as tall. (Barefooted with her hair “mashed” down, she’s 6’2″ in her size 11B stocking feet.) But nowhere will you find a speaker so adept at turning personal experiences into funny material that does more than elicit laughter. This Miss Congeniality winner in the Miss America Pageant, “Yearrrrrrrrrrrs ago,” quoting Jeanne, uses her down-home Southern drawl to leave her audiences laughing . . . and thinking about her message.

Jeanne Robertson is a professional speaker who specializes in hilarious humor based on her life experiences.

Speaking to thousands of people annually, she utilizes her positively funny style to illustrate that a sense of humor is much more than a laughing matter. It is a strategy for success. Other speakers might be as witty as Jeanne. Some might even be as tall. (Barefooted with her hair “mashed” down, she’s 6’2″ in her size11B stocking feet.) But nowhere will you find a speaker so adept at turning personal experiences into funny material that does more than elicit laughter.

This Miss Congeniality winner in the Miss America Pageant, “Yearrrrrrrrrrrs ago,” quoting Jeanne, uses her down-home Southern drawl to leave her audiences laughing . . . and thinking about her message. Jeanne’s success as a humorous speaker has not gone unnoticed by her peers. She has been awarded every top honor in her profession. They like her back home too. The NC Press Association named Jeanne 2001 North Carolinian of the Year. You may have seen this Hall of Fame speaker being interviewed by CBS correspondent Morley Safer on “60 Minutes” . . . or watched one of the six humor DVDs she has produced in the last eleven years . . . or heard her daily on Sirius/XM Radio’s Family Comedy Channels . . . or seen her Youtube clips that have had millions of hits. But only if you’ve seen Jeanne in person at one of the thousands of speeches she has given over the past 45 years can you really appreciate why she stands at the top of her profession.

Jeanne Robertson is funny. Oh my, yes. She also knows that her job is far more than being funny. Her message is that a sense of humor is an attitude, an approach toward working with people. She believes that this humor attitude can be developed and improved, and she outlines how to do so while captivating audiences with funny, original stories.

Jeanne doesn’t have specific, canned speeches. She pulls from her huge bag of funny,

original material to plan just the right speech for each occasion. She also like to create speech titles for different occasions,

themes, meeting planners requests, etc. That said, here are a few titles that work well. It’s just that there is no pat speech to go with each title. The long explanation of that can be found in “Presentations/FAQ.”

“Humor: More Than a Laughing Matter”
In her positively hilarious style, 6′ 2″ Jeanne Robertson soars to new heights while discussing the differences between being funny and possessing a sense of humor, learning to laugh at yourself and accepting things that can’t be changed. You will hold your sides and wipe tears of laughter from your eyes as Jeanne relates original stories based on her life experiences.

“Humor: A Strategy for Success”
In this step-by-step presentation, Jeanne helps audiences learn how to develop a sense of humor, which according to her is a choice in how you go about living. She explains the dynamics of humor, challenging audiences to laugh at themselves, look for the humor in everyday situations, create their own humor and influence others to do the same, relieve stress through humor and take humor breaks. As she relates her original, funny tales, Jeanne helps people develop a refreshing new approach to humor and the magic it works in our daily lives.

“Here He Is… Mr. Meeting!”
Pure fun with a little message! Jeanne reaches into her big bag of original material and pulls out just the right stories for each audience and situation. An old fashion “after-dinner talk” that can be used in a variety of meeting slots. Not comedy. Hilarious humor that illustrates a point. 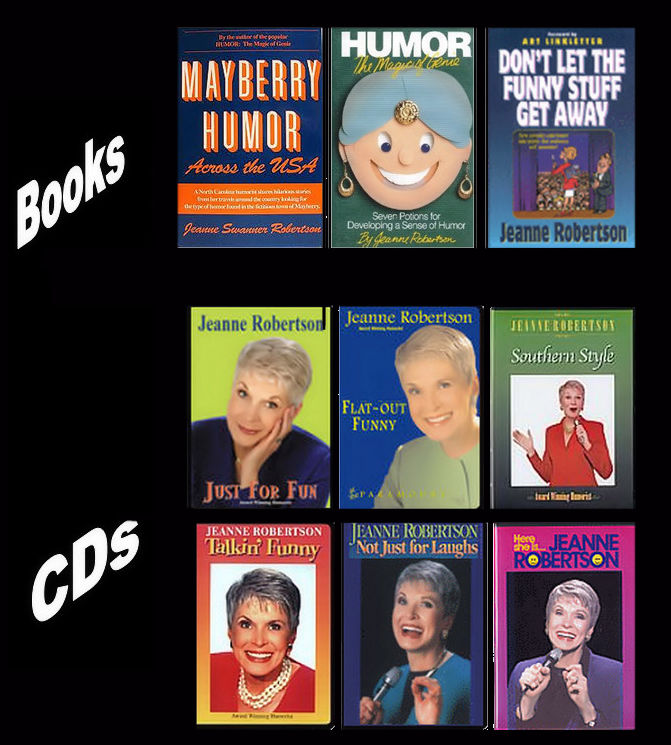 Jeanne Robertson, CSP, CPAE reached her 6’2” stature at age thirteen. Perhaps it was an indication of a future speaking career that would soar to great heights.

No, professional speaking might not have been predicted when Jeanne was in the seventh grade in Graham, North Carolina, when and where she would have been voted most likely to make the basketball team and least likely to be a contestant in the Miss America Pageant. She did make the team—averaging more than thirty points per game in her junior and senior years—but as Miss North Carolina 1963 she also competed in the Miss America Pageant where she was named Miss Congeniality.

It was her participation in and perhaps even her losing of the Miss America title that turned Jeanne’s life into a succession of events which led her to be one of the funniest, busiest and most popular professional speakers in America today. Because she was asked to speak every day as Miss North Carolina, Jeanne traveled her native state for one year speaking at pageants and addressing civic clubs and corporations. When that time was over, she found that people were willing to pay her to come and address their groups and conventions and loving every laughing minute of it. They wanted Jeanne-not just a title holder-and they wanted her because she made them laugh.

At that point, Jeanne still viewed speaking as a way to make a little money while continuing her education. She received her degree at Auburn University and taught physical education in high school and college, a career she enjoyed for nine years. But throughout those years, the requests continued to pour in for her to speak. In 1976, she stopped teaching and entered professional speaking full time. With the flexibility to speak more often, Jeanne’s rise in the speaking profession was nothing short of phenomenal. Clients and speakers alike were quick to recognize her ability. In addition to a full speaking schedule year after year, she has been awarded every top honor and designation in her profession including the Certified Speaking Professional designation (CSP) in 1980 and being inducted in the CPAE Speaker Hall Of Fame in 1981. A member of NSA/Carolinas, she served as President of the National Speakers Association in 1985. In 1989 she became the first woman to receive that association’s most cherished honor, the Cavett Award. The Cavett is awarded annually to one member “whose accomplishments, integrity and reputation are a credit to NSA and the speaking profession.”

Toastmasters International named Jeanne the recipient of its 1998 Golden Gavel Award, given annually to one individual for accomplishments in leadership and communications. She is the only female professional speaker who has received this honor.

In recognition of her professional expertise, experience, and competence, Jeanne was honored by the NCAA Southeastern Conference as Auburn University’s Woman Entrepreneur of the Year 2000. She currently serves on the Board of Trustees of Elon University.

The North Carolina Press Association named Jeanne as its 2001 North Carolinian of the Year for “her popularity on the speaking circuit, her award-winning ways, and her representation of North Carolina.” Past recipients include Elizabeth Dole, Rev. Billy Graham, and Dean Smith.

Jeanne has produced six humor DVDs and CDs and written three books on humor – Humor: The Magic of Genie, Mayberry Humor Across the USA and Don’t Let the Funny Stuff Get Away. These books are filled with reality-based stories, which illustrate her humor philosophy. She can be heard on SiriusXM Satellite Radio’s Family Comedy and Blue Collar Comedy channels.

While she enjoys making people laugh, Jeanne views the role of a humorist as more than eliciting laughter. As audiences are holding their sides and wiping tears from their faces, she makes her point clear. Perhaps that is why thousands of meeting planners make their point clear when they say… “The Meetin’ ain’t over ’til the tall lady speaks.”