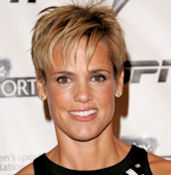 Dara Torres’ inspiring story of competing in the 2008 Beijing Olympics at age 41, the oldest swimmer to compete, shows us all that no matter how big your dreams are, you’re never too old to achieve them. Since her first international race at the age of 14, she has proven that she is far from your average athlete. Outside of swimming, Torres has made a name for herself as a TV commentator, print model, and as the first athlete to appear in the Sports Illustrated swimsuit issue in 1994.

She is author of Age is Just a Number: Achieve Your Dreams At Any Stage In Your Life and Gold Medal Fitness: A Revolutionary Five Week Program, both of which made The New York Times best-seller list.

Even though the 45-year-old Torres came up just short in her bid to make it to the 2012 Olympics team for a sixth time, she finished a strong fourth in the finals of the 50-meter freestyle. Torres is truly an inspiration as she continues to compete and grow her brand.

Never Give Up Your Dream
Dara Torres shares her incredible story about defying the odds. As one of the most successful Olympians of all time, Torres experienced tremendous success at the 2008 Beijing Olympics where she was the oldest member of the U.S. Olympic Swim Team. In a presentation filled with humor and inspiration, Torres tells the audience that age and experience are advantages. “Use them to achieve your goals,” she says. She encourages audiences not to give up on their dreams and to fully embrace the sacrifice and dedication required to achieve what may initially seem impossible.

You’re NOT Too Old to Chase Your Dream 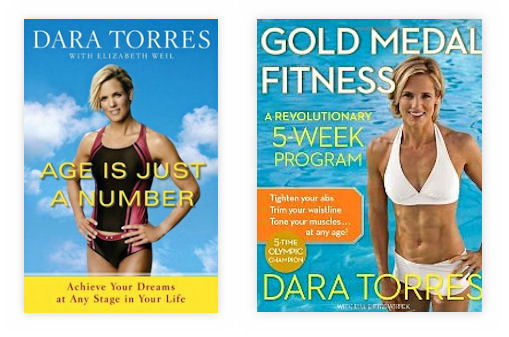 Dara Torres is arguably the fastest female swimmer in America. Since her first international swimming competition at age 14, Dara has proved that she is far from your average athlete. She is the first American swimmer to compete in five Olympic Games and has won a total of 12 Olympic medals in her career. In 2008 Dara captured the hearts and minds of people of all ages when she launched her comeback as a new mother at the age of 41 – eight years since her last Olympics when she retired from competitive swimming.

Dara discovered her talent and passion for swimming at a young age. She proved that she was far from your average athlete when she broke her first national record at age 12. She carried her success to the University of Florida where she earned the maximum 28 possible NCAA All-American swimming awards.

At the Beijing Games in 2008, Dara became the oldest swimmer to compete in the Olympics. When she took three silver medals – including the infamous heartbreaking 50-meter freestyle race where she missed the Gold by 1/100th of a second – America loved her all the more for her astonishing achievement and her good-natured acceptance of the results.

Outside of swimming, Dara has had great success as a TV commentator and a print model and was a feature correspondent for Good Morning America, worked on-air for ESPN, TNT and Fox News Channel including stints on NHL Cool Shots and Fox Sports Sunday. The first female athlete to grace the Sports Illustrated Swimsuit Issue, Dara Torres has also appeared as a commentator on such networks as Fox News, ESPN and the Discovery Channel. In 2009, Dara was named one of the Top Female Athletes of the decade by Sports Illustrated magazine and won the Best Comeback award at the 17th Annual ESPY Awards. Her memoir, “Age is Just a Number: Achieve Your Dreams At Any Stage In Your Life,” was published in April, 2009. Her second book, “Gold Medal Fitness: A Revolutionary 5-Week Program” was released in May, 2010 and quickly became a New York Times Bestseller.

Olympian, author, mother, and role model, Dara Torres is many things to many people, but above all, she is an inspiration.

• First swimmer from the United States to compete in 5 Olympics

• US Record Holder in the 50m Freestyle